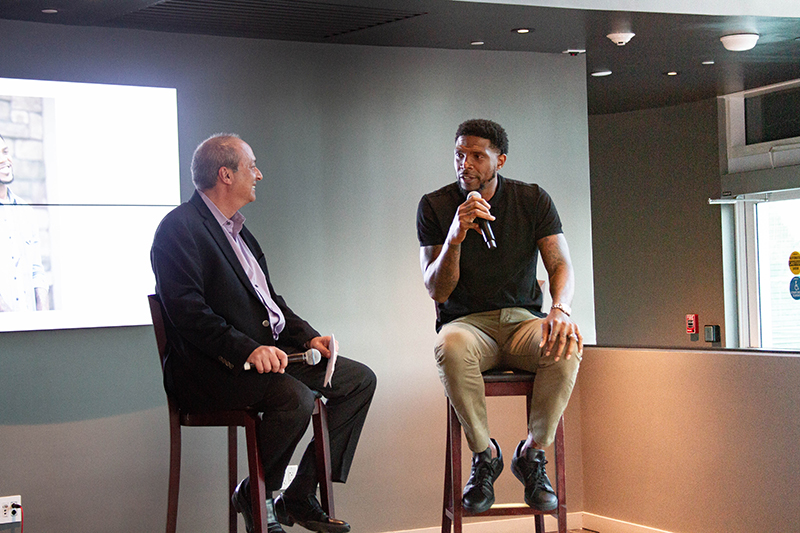 Udonis Haslem is a powerhouse. The 38-year-old professional basketball player joined the Miami Heat in 2003 without being drafted, and he has been the team’s captain since the 2007-08 season, winning three NBA championships. In September, he signed on for another year, with a $2.4 million contract. Not only that, his success goes beyond the court and into the business and philanthropic worlds. He and fellow Heat standout Dwyane Wade, his longtime friend, teamed up on an 800 Degrees Woodfired Kitchen franchise in Aventura, which opened in September. Another one is planned for next year at the Brightline MiamiCentral station. Through their partnership company, Forty-Three, which plays off their jersey numbers, the duo launched the restaurant.

In addition, Haslem is a franchise investor in five Subway restaurants and two Auntie Anne’s pretzel shops in South Florida. He partnered with Ramona Hall, who has experience operating Nestle Tollhouse Cookie and Coffee Beanery locations, to establish JFC Miami. JFC operates fast-casual, nationally branded restaurants in Miami-Dade and Broward counties, including an Einstein Bros. Bagels and a 24-hour Starbucks at Jackson Memorial Hospital, along with an Einstein’s at Brightline’s MiamiCentral station.

In 2005, he founded the Udonis Haslem’s Children’s Foundation, offering programs and services for kids to achieve their full personal and educational potential.

The University of Florida alumnus opened up about his early life before reaching sports stardom during SFBW’s September “CEO Connect” at 601 Miami, the restaurant, bar and event space at AmericanAirlines Arena. He was interviewed by SFBW chairman and CEO Gary Press.

“The thing about the inner city is not that kids don’t want to be great,” he says. “You only know what you’re surrounded by. For me, that was the reason why I started the foundation: to give the kids a different vision. I tell people all the time that I had never been to South Beach until I got to the NBA.”

He also has invested in local job creation, especially for the underprivileged. JFC Miami partners with the employment agency CareerSource Florida and the Employ Miami Dade Project, and, so far, 66 jobs and counting have gone to unemployed job seekers and young adults from low-income families. It is no wonder that JFC Miami was honored as “Franchise/Licensee Company of the Year” at the Black Enterprise Entrepreneurs Summit Small Business Awards in 2017.

Going to UF, where he received a four-year scholarship, was an easy decision, Haslem says. “My father is probably still mad at me to this day,” he says. “I just visited UF and thought I wanted to go, and I didn’t take any visits anywhere else. He didn’t talk to me for a while. But it worked out. We grew up in a University of Miami Hurricane house. I was the kind of kid who needed to get away. I needed to be in a different environment to be successful. One thing about me as a kid, I was very self-aware. That has helped me.”

Haslem got his career inspiration before college, when he attended Miami Senior High School. He says his coach, Frank Martin, who is now at the University of South Carolina, changed his life. “He was the first coach and person who challenged me. He asked me if basketball was something I really wanted to pursue. Basketball came to me easily, and he pushed me. I think every stage in my career and in business, I’ve been able to evolve,” Haslem says.

After a sports injury caused him to miss almost an entire season, he met with an accountant who handled a number of business accounts and started brainstorming. “I asked him, ‘What are other people doing outside of basketball?’ ”

One of those ideas was franchising a Subway sandwich shop.

“It’s pretty easy to run once you get the whole format and process of counting pickles, tomatoes down,” he says. “You have to surround yourself with great people, and that means you need to shake people sometimes.”

Haslem’s business acumen reflects his athletic training. “As I spent more time in business, I started to acquire the same obsession I had with winning a championship. The blueprint is the same thing in the business world,” he says.

He and Wade knew each other before playing for the Heat or going into business together. They share similar backgrounds, he says. They grew up together and both fathered children as teenagers. “Both of our parents also had similar struggles that we had to overcome to get here, so we bonded early. We could rely on each other. I’m outgoing and he was the quiet, reserved one, so we balanced each other out.”

Haslem has three sons, Kedonis, Elijah and Josiah, and lives with his wife, Faith Rein, in Weston. In 2016, he was inducted into the Greater Miami Chamber of Commerce Sports Hall of Champions.

“You know everybody’s path is different,” he says. “One thing that my mom always told me—she was a very spiritual person—is that you can’t teach heart.” ♦

800 Degrees Woodfired Kitchen is chef Anthony Carron’s take on the art of cooking over wood-fueled fire. Prepared with high-quality ingredients, dough made from scratch, fresh produce and artisan-quality meats and cheeses, the food is cooked in rotisserie and pizza ovens. The result is a diverse menu that offers meat, healthy salads, power bowls and appetizers—dishes beyond pizza—with an emphasis on locally sourced ingredients and vegan and vegetarian options. The Aventura outpost at 2956 Aventura Blvd. is open for lunch and dinner.

The evening begins with a cocktail reception for about 100 guests followed by the highlight of the event, a live interview conducted by SFBW Chairman and CEO Gary Press or SFBW Associate Publisher Clayton Idle and a well-known C-level executive who provides insight into their personal lives, careers and views on issues affecting the business community.