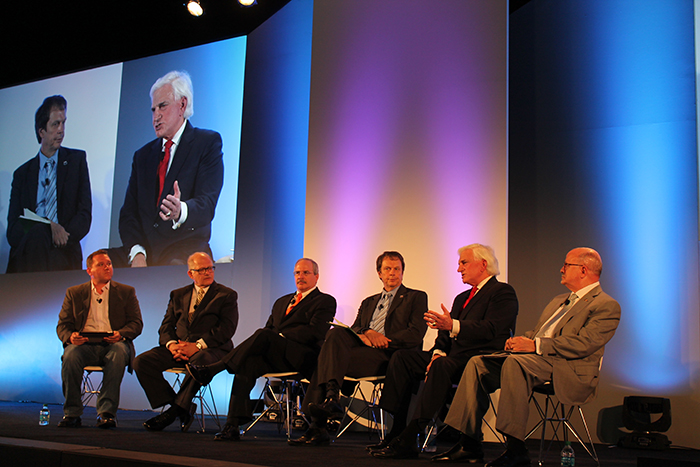 Some key takeaways on Cuba and education from eMerge Americas

FIU’s philosophy has changed from focusing on rearview-mirror benchmarking to becoming a solution center that addresses community challenges. While there is competition between the universities in South Florida, there is also coordination in fields such as life science. An online portal helps spotlight pockets of excellence and where to find equipment that can be leveraged by more than one school.

Colleges and universities in Miami have also formed an Academic Leaders Council.

Entrepreneurship is fundamental to the education process, LeBlanc says. UM’s support network, which includes The Launch Pad, has helped start 200 companies that have hired 700 people, while the U Innovation faculty team has worked with 19 startups in the last few years.

The UM Life Science and Technology Park is open and is not just restricted to companies that spun off from UM. The university is looking at how to create gap funding for researchers whose technology needs more money before private sector support. It’s working with other universities to create a regional funding model.

The entrepreneurial and talent pool has grown in South Florida, but the region hasn’t done a good job of documenting it, LeBlanc says, noting that Magic Leap’s $500 million investment by Google was the nation’s second-largest tech investment last year. “The picture today is much better than it was 10 years ago,” he says. “But it’s fuzzy; until it’s clear, it will be hard to keep people in town.”

He also talked about a graduate student who was helping high school kids with underwater robotics when another grad student said he could build an artificial hand to address a congenital defect. The result was a device built using 3-D printing that could be produced for $100 and given away around the world with help from donors.

Nova is different from many schools in that 80 percent of its students are in graduate or professional programs, Hanbury says. There’s a major emphasis on science, engineering, technology, math and health care. The university is expanding its medical programs by adding an allopathic (MD) program in addition to its long-offered an osteopathic (DO) program.

South Florida has the potential to be a biotech corridor, says Hanbury, whose university is building both a teaching hospital with HCA and the 215,000-square-foot, $80 million Center for Collaborative Research. He expects a lot of involvement in clinical trials.

NSU also conducts research at its newly renamed Guy Harvey Oceanographic Center. Hanbury recounted how a researcher showed him what looked like ground-up human bones, but it was actually coral that was being researched for stem cells that could regenerate human bones. “We have a wonderful opportunity to not only to be high-tech, but also biotech,” Hanbury says.

Miami Dade College is looking to supply the innovators, creative people and problem solvers that employers are seeking, Padrón says. The school redrew its curriculum to reflect the industries that have the most growth potential in South Florida.

MDC has developed a partnership with Babson College, whose Arthur M. Blank Center for Entrepreneurship has one of the nation’s top programs. MDC’s faculty has also visited Harvard, MIT and Cornell.

“We’re doing what some people thought was impossible – infusing entrepreneurship into every single course,” Padrón says. The college’s Idea Center supports students to put their creativity and innovations to work.

MDC is also helping meet the needs of underserved students, says Padrón. He notes that most of the college’s students take public transportation, but they are as ambitious as any other students.

Padrón expressed concern that there’s not a regional approach to education, which puts South Florida at a competitive disadvantage. “Orlando and Tampa area eating our lunch,” he says.

Cuba: The Next Chapter

Here are some key points in a discussion moderated by CNBC’s Michelle Caruso-Cabrera.

Lane was part of an eight-member contingent that recently visited Cuba. He says all the members of his team were optimistic about opportunities.

He was surprised about several things: First, that Cubans are “amazingly optimistic” and excited about the future; second, that change is already apparent in some of the private sector. “Literally you can go to Cuba and get good food,” he says; and third, that  there is a lot more demand for U.S. products than expected.

Lane says Cuba will become a much more robust market if it makes further structural changes, which he expects to see over the next 18 months. He thinks there is every indication the Cubans will embrace reform.

The operators of the Mariel economic zone are already talking about no taxes for 10 years. “You would think you are talking to any economic area in the U.S. as far as attracting business,” he says. “If you are not focusing on Cuba now, I think you are missing out.”

Cuba has the potential to quadruple its mining output and has very rich nickel mines, he says. A major problem is that the equipment is wearing out. He estimates 35 to 40 percent of the construction equipment is idle.

Yosbel A. Ibarra, Shareholder and Co-chair of the Latin American and Iberian Practice, Greenberg Traurig

Ibarra says that when he left Cuba at 6 years old, he told his parents he didn’t want to go to the U.S. “I thought it was a bad pace to go,” he says, a reflection of the ideology that was ingrained in him by the Cuban system.

Ibarra says he was shocked when President Obama announced a change in policy toward Cuba, but cautioned that the executive orders mean the situation could change after the next presidential election. This uncertainty means that a company might be more likely to export to the country than make a major investment.

Ibarra says the lifting of the U.S. designation of Cuba as a terrorist state had broad implications because the designation scares other countries from doing business there. Ibarra was at a conference in Mexico where attendees saw Cuba as a potential rival in fields such as software and call centers.

Santa Cruz says Cuba has a special relationship to the U.S. that makes doing business there different from other Caribbean nations. “Does it start with “I Love Lucy” and Desi Arnaz? I don’t know,” he says, adding that the sum is larger than the parts.

IMG, which is known for talent management and an array of branding, licensing and media, will have challenges in doing business there. Given the income levels on the island, there’s a question of how much can be charged to go to a sporting event, since there’s no sports branding system set up in Cuba. “Imagine the Super Bowl without sponsors,” he says.

Despite decades of tension between the Cuban and U.S. governments, Cubans in general adore the U.S., whether they admit or not, he says. “They want to have Coca-Cola. They want McDonald’s. They welcome it in their own way.”?