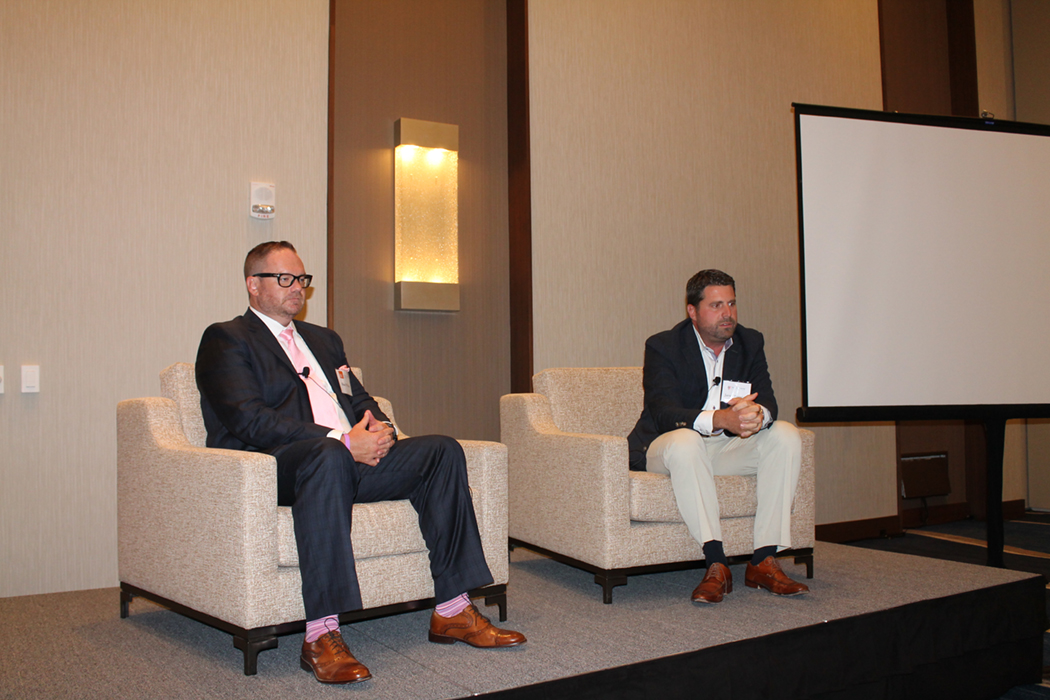 The Art of the Equity Deal

Entrepreneurs share how they got funding to fuel growth

Entrepreneurs and investment bankers talked about the challenges and triumphs of growing companies during a seminar presented by Bonaventure Equity in West Palm Beach.

The speakers included a serial entrepreneur in the gas turbine space, a product innovation company CEO from New York, investment bankers from Boston and a company in Wellington that advises family offices and portfolio companies.

Bonaventure Equity, which is based in Jupiter, also is an example of the growing ecosystem of family offices and private equity in South Florida. It advises family offices on direct investment strategies and processes, sourcing of new opportunities, due diligence, analysis, management and operations.

The first speaker was StoreBound CEO Evan Dash, whose products can be found in major retailers such as Macy’s, Target, Wal-Mart and Kohl’s as well as TV shopping channels QVC and HSN. The New York-based company, which helps bring inventors’ ideas to market, expects to hit $30 million in sales this year, Dash says.

Dash had a lot of experience when he started the company in 2010. He previously was general merchandise manager at Linens ’n Things, senior VP at Macy’s, president of a division at kitchen products company Epoca and CEO of kitchenware maker Prepara.

Even with those credentials, he still had to deal with the first questions private-equity investors asked: What’s your exit plan? Oh, and what’s the valuation of the company?

Dash recounted that it was hard to figure out an exit strategy and valuation before the company had shipped any products.

He put $2 million into the business and HSBC gave him a $500,000 loan, but he had to put the same amount in a collateral account.

He used factoring and purchase-order finance and then had a disaster with an asset-based lender. He expected an 11 percent cost of capital, but it went to 30 percent.

Fortunately for Dash, a factor he knew from his days at Macy’s agreed to do business. He says he could get bank financing now, perhaps at a better rate, but the lender might not offer the flexibility his factor does.

With a firmly established business, he’s talking with Ross O’Brien, the CEO of Bonaventure Equity about a relationship that could involve family offices. So far, Dash has been able to keep 100 percent equity in his company.

Kraft is an engineer by background and previously worked on military gas turbine engines at Pratt & Whitney. Before Powerphase, he co-founded Power Systems Manufacturing of Boca Raton, which was sold to Calpine Corp. for $34 million in 2000, according to a news release. Kraft stayed with the company and it was sold by Calpine to Alstom for $242 million.

Kraft left Power Systems in 2010 and launched Powerphase in 2012.

It has come up with the world’s first and only air injection system for gas turbines, he says. That enables turbines to put out 10 percent more power and can help utilities generate more power during periods of peak demand.

The company has 80 patents, and it ships the $2 million devices in 40-foot shipping containers. The company has gone from two potential customers to more than 300.

Often financial deals are packaged with management advice and expertise, which is where speakers Michael Swackhamer and Gary Furst of Generation Equity Capital of Boston came in.

The company’s strategy is to make a story go from good to great and bring value with management expertise.

Furst talked about his experience with Kryptonite, which was originally known for bicycle locks. As CEO, he helped broaden the product line and it went from losing money to being acquired by Ingersoll Rand, a public company.

Among Generation Equity’s current investments is Sherrill, a provider of specialty products for those who take care of trees. Instead of relying on a once-a-year catalog, the company has a thriving website. Furst also suggested the company establish its own brand of products, which have higher profit margins, instead of just selling products made by other companies.

To end the event, O’Brien took the stage with Jarrett Bostwick, a principal with National Financial Companies in Wellington. The merchant banking company draws funding for investments from three family offices.

NFC’s strategy is to look at markets that have barriers to entry, but no dominant player.

NFC likes to find people who have vision and creativity but need help with the entrepreneurial aspects of the business, Bostwick says.

Part of NFC’s strategy was to invest early on in back-office operations to help support the entrepreneurial companies in its portfolio, Bostwick says. An affiliate of NFC, Tropico Management, has about 16 legal and financial professionals, who can act as chief financial officers or chief accounting offers for the portfolio companies.

“That allows for the operating company to have some rocket fuel,” Bostwick says. The entrepreneurs leading the companies get to focus on revenue.

When revenue hits an appropriate level, permanent staffers can be brought in for positions such as CFO.

One example of a successful investment involved the husband and wife team of Ted and Kathee Kramm, who had expertise with intravenous immunoglobulin infusion (IVIG). They thought there were new uses to help deliver medicine via IVIG. Their company, Axela Care, was capitalized with $250,000 of capital and just under $2 million in debt, Bostwick says.

In 18 months, the company had $77 million in revenue and EBIDTA (earnings before interest, taxes, depreciation and amortization) was just over $9 million. NFC sold 40 percent of its stake at the 24-month mark as part of an overall sale of the health care company.

A larger private-equity company added more acquisitions to the health care company. At the two-year mark, the company was sold again for $225 million after it had grown to $121 million in revenue and just under $25 million in EBIDTA— “very good ratios and very profitable,” Bostwick says.

The company kept growing even after that and was later sold for $1.1 billion to United Healthcare. ↵