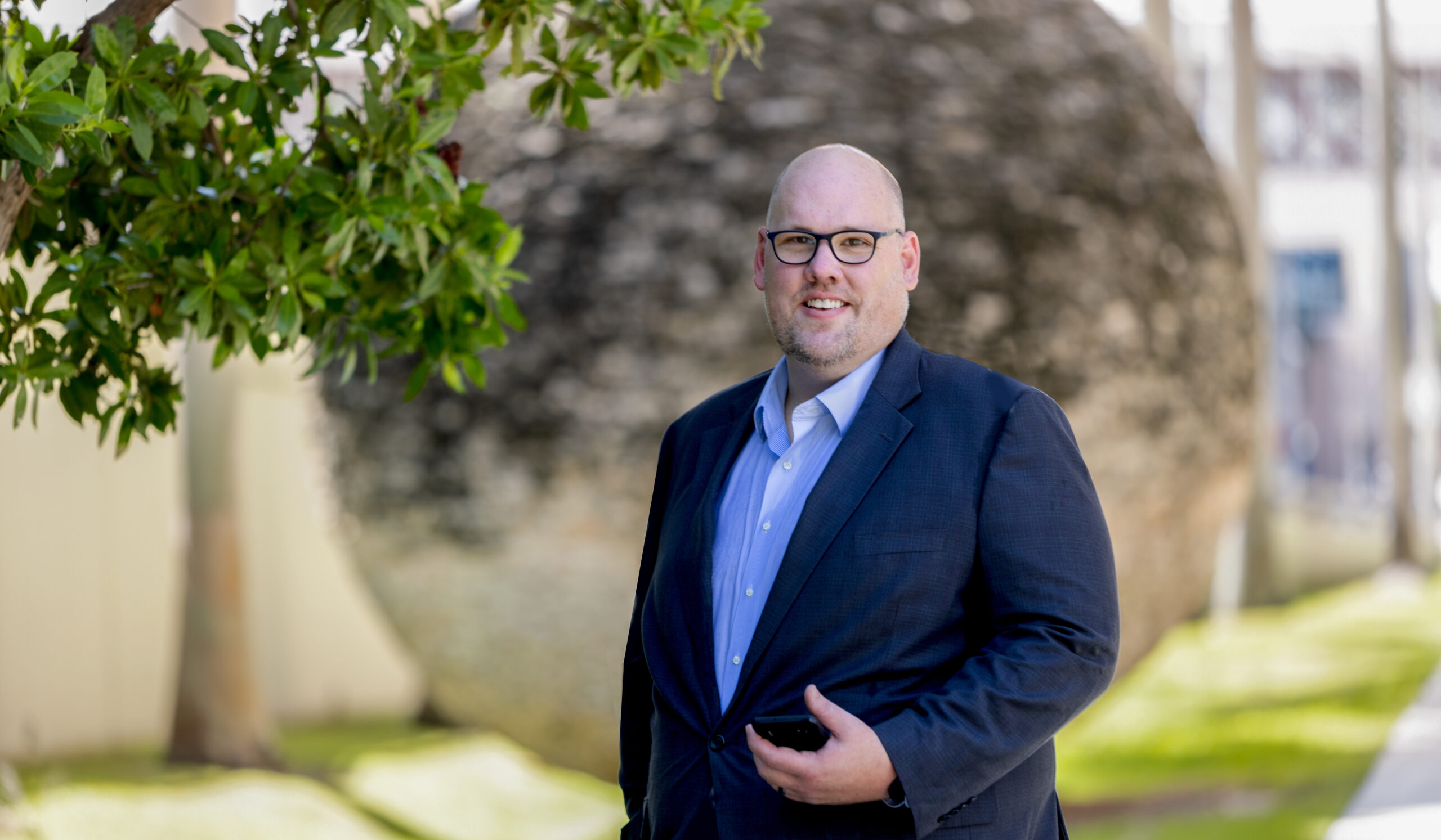 With a troubled past imprinted on his psyche, attorney Brent Thompson has devoted his career to community advocacy

“When I was growing up, we were very poor, in a very impoverished place,” says Brent Thompson about his North Dakota upbringing. The executive director of Legal Aid Service of Broward County, located in Plantation, remembers a small town with a diner, a bar, a little grocery store and “a lot of trailer parks, lower income families and that was definitely us.”

He made his way through college and law school at the University of North Dakota, finishing up two decades ago. Now, in Broward County, a place he has lived in for only a few months, Thompson resides with his wife, his son, two dogs and three guinea pigs—and he serves a community where the need seems never-ending.

The organization works cooperatively with more than 120 area non-profits and each year it works to protect and defend the legal rights of more than 25,000 children, seniors, veterans, homeless people, people living with HIV/AIDS, domestic violence victims, and unaccompanied immigrant minors. The mission of Legal Aid Service of Broward County is to assisting Broward County residents build safer, healthier and more stable lives.

“When I call home,” Thompson says, “my brother answers the phone and his first response to me is, ‘Are you done saving the world?’”

He’s not. The man who sports a tattoo on his arm that reads, “Be of Service” spoke to SFBW about his difficult past, his career path, and what makes his work so fulfilling.

You started working with a legal aid organization, and you worked your way up the ladder from an internship, holding nearly every conceivable position. What was the connection between your background and this path?

I think there’s no doubt that the way I grew up in my family had a big impact on what I want to do. I grew up in living primarily with my mother, and she raised basically raised my brother and me—very, very poor. This is back in the ’70s and ’80s. You know, public benefits and government programs weren’t as widely available as they are today. I just remember my mom would get home at 6, 7 o’clock at night just, every day, tired and just working hard to make sure my brother and I were taken care of and provided for.

Eventually you moved on to Minnesota?

Once I graduated law school, I went up to Duluth, Minnesota. I clerked for a judge for two years and then after that I moved to the Minneapolis area where I worked for legal aid for 11 years. Then I was
offered a position to become the executive director of East River Legal Services in Sioux Falls, South Dakota. So, I took that opportunity and that’s where we were right before we came here—that position led to this position.

Tell me about how fulfilling your work can be.

For example, helping a veteran further their discharge status or navigating a really complex system of veterans’ benefits—it may not seem dramatic but the effect of it is unbelievably dramatic. Getting those benefits, even if it doesn’t necessarily in our minds register as a lot of money, but to them that’s literally a life-changing event just to be able to afford the basics in life. I mean, you’ve never seen someone happier then when they finally find out that that problem is solved and their benefits are going to be reinstated, whether it’s veterans’ benefits, public benefits, Social Security or disability insurance.

What about your consumer protection work?

This is an area that I’m always concerned about. I know for a fact that it never gets enough funding because it’s not sexy, but the number of predatory lenders out there just shocks me. I think it actually, even, transcends your poverty—I mean, I think it’s just these predatory lenders out there that take advantage of people. Most states don’t even require special licensure or training of any kind—it’s literally just buying that debt and so often when they buy that debt it’s just the name and Social Security number without an understanding how the debt was created or what’s been done in the meantime to pay down that debt.

What would you have liked to have accomplished in the first year of your tenure?

More than I should choose, just because I get excited about things we can do for our community. I’m really happy with what we’ve been able to accomplish already. Just in the short time I’ve been there, we’ve been able to rework the development side of the organization. We have now a director of development, we put a team under him and the work they’re doing already is tangible—you can see the step-up in our charitable giving.