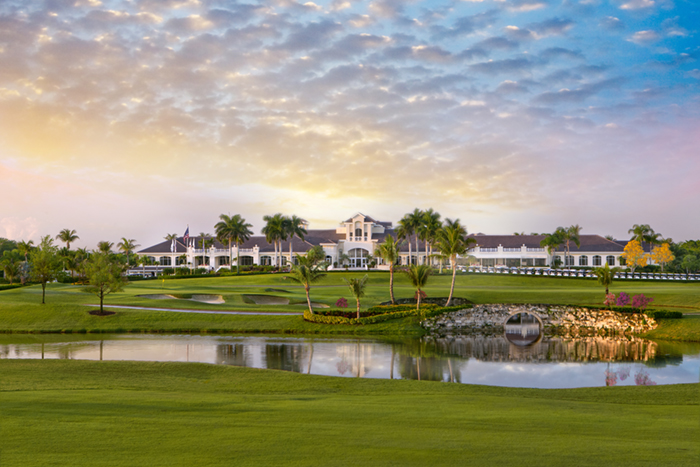 The Other Type of Green

Country clubs embark on an array of projects

This is the first in a series of bimonthly articles about the business of golf and country clubs in South Florida.

Country clubs in South Florida are embarking on an array of construction projects and upgrades in an effort to appeal to more than golfers.

When construction on Boca West Country Club’s new 155,000-square-foot clubhouse is completed early next year, Jay DiPietro, the club’s general manager, president and chief operating officer, says patrons and guests can expect to see something unique and totally different from the norm. Work on the $50 million project began more than a year ago, he says.

“The restaurant will be like nothing else,” DiPietro says. “The grill room is being replaced by a combo grill room and sports bar. There’s also outside dining.”

The new grill room/sports bar area will feature a nostalgia-themed streetscape from the lower East Side of New York in the 1940s. “There’ll be old street signs and stores with awnings,” he says.

The new clubhouse will also feature as a steakhouse as its main restaurant. “This is more than a steakhouse,” DiPietro says. “It will have the best steaks in the United States. It will have more rooms and be glamorous. It’ll be overlooking waterfalls.”

DiPietro says country clubs today are adding more amenities. “Our whole goal is to have our members like it so much, they stay here every day,” he says.

Mike O’Brien, general manager at the Fort Lauderdale Country Club, says, “People are more interested in food and the restaurants,” and members want a high-quality dining experience in their clubhouse.

The club, which has two 18-hole courses, renovated its clubhouse in 2007 and celebrated its 90th anniversary in 2016.

“The new clubhouse will almost be a replica of the old one,” Snure says. “We needed more space. It will be just north of where it is now.”

“We redesigned the golf course to fit the new clubhouse,” Snure says. “We needed more party space. We needed to expand. The old one was built in the ’40s. It’s designed to flow and be more usable. It’s a more modern structure. We also needed more parking space.”

The golf course renovation includes the addition of a two-acre lake and a half-acre lake, and has been described as having a modern and unique design. Other course updates include significant changes in elevation and a modern irrigation system.

Riviera Country Club opened in 1945, and has been described as a significant, historic piece of history in the affluent Miami-Dade community. The cost of the renovations has been reported at $8 million.

Brian Merbler, director of sales and marketing at BallenIsles Country Club in Palm Beach Gardens, sees changing trends in country club living, and like a host of other clubs, BallenIsles has made—and is planning more—renovations to accommodate them.

A steakhouse will be the main restaurant at the new 155,000-square-foot clubhouse at Boca West

Between 2008 and 2009, the club did a light renovation of its clubhouse, but built a brand new sports complex. “A lot of people have an affinity toward health and living longer,” Merbler said.

He says there might be more to come in the near future. “We’re now fast approaching a vote for a heavy renovation to the clubhouse itself,” Merbler says. “The cost will be north of $30 million.”

Many clubs are looking at changing dynamics in what attracts customers to the country club lifestyle. “It’s very much an eye to the future of what our membership will look like,” he says. “A lot of clubs are putting up new clubhouses or doing renovations. There’s definitely a trend, or an evolution, of what membership expects.”

The new sports complex offers Pilates and physical therapy, he says. “It’s a one-stop shop. We have a whole team of trainers.”

As for the club’s future plans, he says, “what we’re doing now is adding the cherry to the sundae.”

Some in the country club industry say they’re trying to attract a younger generation of members. As a result, completed or future renovation projects are being built with more family-oriented amenities being made available.

South Florida Business & Wealth magazine tried contacting a number of additional country clubs throughout South Florida to discuss these changing trends. Some of them, which included one club with only male members, declined to comment. ↵