A recent edition of the South Florida Executive Roundtable convened a panel with insights into the real estate market.

Affordable housing was a big concern during the discussion, but mass transit and related developments might help. Panelists are cautious about the extended real estate boom in this economic cycle, but see steps that could prevent another major downturn. Shared workspaces, facial recognition, and even CBD and hemp were topics discussed.

Jeremy Larkin, co-chairman of NAI Miami, said, “Up until March, I would have told you we would be into recession by the end of the year. Since April, you have seen someone kicking an ant hill.”

Economic activity perked up and buyers started coming back into the market, he said. “Historically, cycles were predictable and now they are not.”

Jay Steinman, an equity partner and real estate and commercial financial practice leader at the law firm Duane Morris, said, “We continue to go up despite all the things out there that are scary.”

He is seeing a tremendous amount of activity that he might not have predicted six months ago. There’s been no slowdown in investments, but a lot more capital is being put into deals with lower leverage.

Steinman said there’s an abundance of private capital. Banks don’t want to hold loans, but lot of entities do.

Frank Fernandez, a commercial banker with CenterState Bank, said the bank sees a lot of positive activity, but is keeping an eye on the amount of liquidity, so clients can be in a stronger position to withstand any challenges.

Lis Greer, first vice president and commercial relationship manager at CenterState, says a lot of private lenders don’t seem to have the same concerns as banks. Some banks are pulling out of real estate and the hospitality fields, but everyone loves industrial space, he said.

She’s optimistic about the next five years. 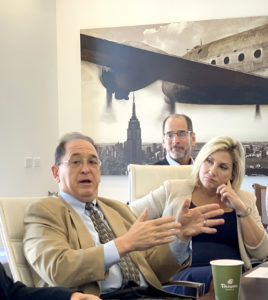 Ronei Foumia, a partner with Ascendo Resources, a staffing and consulting firm that hosted the roundtable, said he’s getting a lot of requests from mezzanine lenders.

“If you are looking for a deal, you are not buying in Miami,” he said. Naples, Orlando and smaller cities with walkability are popular.

There’s still a lot of money flowing in to South Florida from Mexico, Steinman said. “They’ll buy it up. You’ll say, “It’s too expensive” and someone says, “I want that property.” One client just invested in a large oceanfront project in Fort Lauderdale.

Prices are putting pressure on not only the workforce, but developers who are venturing away from South Florida, panelists said.

CEO Melissa Doval of Kairos, a facial recognition technology company in Midtown, is looking for a family home and said it’s virtually impossible to find a nice affordable single-family home east of the Palmetto Expressway. She’s finding too much shoddy construction and bad layouts.

Larkin said his niece and nephew moved to Fort Myers because they couldn’t afford to live in South Florida. They also found better paying jobs.

Mass transit could help foster affordability outside of the urban core, Larkin said. It’s happening, but it takes time. More stops on Brightline could be helpful.

Larkin also mentioned Grove Central at the Coconut Grove Metrorail station at 27th Avenue. The Terra Group and Grass River Property project includes 135,000 square feet of retail with Target as an anchor, 288 apartments and a 893-space parking garage with 898 spaces.

Ronei Foumia, a partner with Ascendo Resources, contrasted Miami to Charlotte, North Carolina, where a company partner bought a beautiful single family home for about $250,000 with a 20- to 30-minute commute.

It could be worse, Larkin noted. Compared with other coastal port cities, such as New York, Los Angeles and San Francisco, we’re a bargain, Larkin said.

WeWork and other shared workspace companies are driving a lot of business in South Florida office space.

Jose Manuel Diaz, co-owner and co-founder of Compass Office Solutions, talked about an example where a prolonged negotiation for a lease renewal was dropped in favor of a lease with WeWork.

Foumia said he started three offices in Regus workspaces. He found the costs were higher than traditional space, but the terms were more flexible.

Larkin predicted WeWork will not exist in five years, because it’s overleveraged financially, but that the concept will survive.

The shared workspace field is getting more and more entrants, including real-estate firms CBRE and JLL. Larkin predicts that there will be a tremendous amount of competition, which will drive down prices.

Real estate is one of the focuses for Kairos. The company just launched a camera that takes five minutes to set up and does automatic facial recognition. She thought it would be fantastic for retail, but the first order was from a real estate developer, who is going to put cameras in different areas to get psychographics, such as age and gender, on foot traffic.

The system could also be used in offices to track employee activity or even create a blacklist of people not wanted on a property.

Moore said one of his most interesting clients is a national CDB chain. CDB, or cannabidiol, is derived from hemp plants and is being promoted as a dietary supplement or cream to treat pain, insomnia and anxiety.

The agricultural community in southern Miami-Dade is struggling with the concept of farming hemp, which is now legal, Greer said. “It’s so foreign to them, but the tropical climate should let it be readily farmed and produced.”

Traditional plant nurseries are still prominent, but she
predicts we will hear more and more about farmland being transitioned. ♦