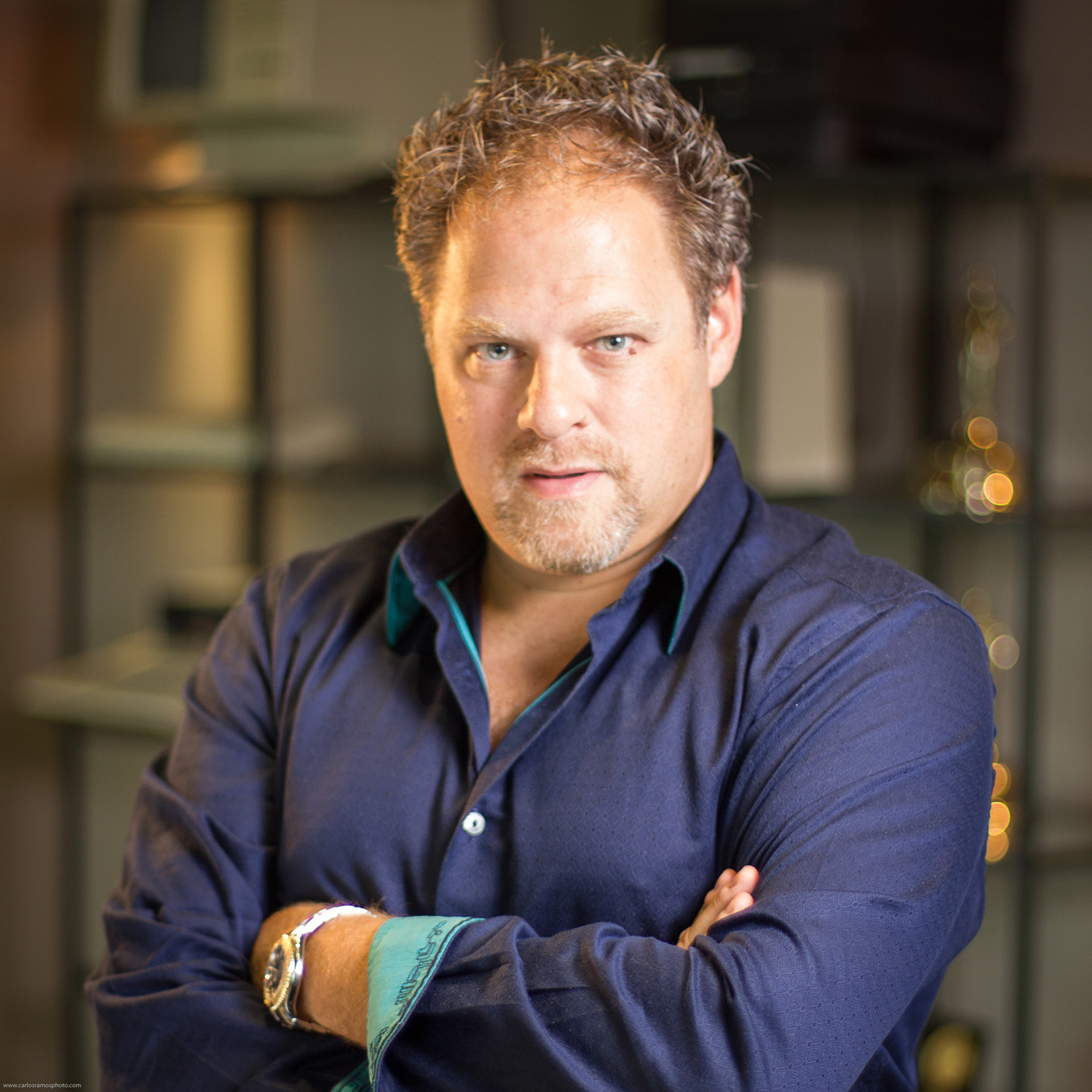 Throughout the COVID-19 pandemic shutdown, South Florida Business & Wealth has continued to bring together C-suite executives and category leaders throughout the tri-county region for insightful conversations about issues pertinent to the local business scene.

Here are some edited highlights from the recent interview between Princz and SFBW chairman, Gary Press.

Tell us about your early life and what advertising was like when you got started.

I was born and blessed to be part of the Mad Men generation. My dad had his own company in Manhattan; we were a full production and post-production company. As a kid, I was in the editing rooms with my dad, learning the craft of telling a story in 30 seconds and 300 frames of film with these [talented] art directors and creatives and cinematographers.

The desktop revolution happened in the 1990s. That was an “a-ha” moment. We were doing all these 30-second commercials for every major brand in Manhattan, and all the major ad agencies. When the internet came out, it was just a life-changing toy, if you will—video and desktop.

We put our first commercials on the web by accident in 1996. When we were able to watch video from one apartment, back to the studio 30 blocks away, 40 blocks away … It was like, this is going to change everything. We were a little bit ahead of our time because a lot of the pitches that we tried to do in 1997 or ’98, people didn’t get it. They couldn’t see how the web was going to change everything.

But it gave us the forethought to pivot from the one-way communication of video and advertising … into two-way communication and have the emotional audio and video and text and data integrated into these experiences that have been done for different brands.

That was when we jumped ship. We said thank you for everything and started a separate company in the interactive space, which was then moved down to Florida in 1999. After nearly nine years, Wrecking Ball was born. This is in 2007. By then, pretty much every major brand had a website. There were no apps; iPhone just came out; Facebook was just launching. So, it was a different time.

But everybody had a digital experience, a digital brand. Looking at what we wanted to do next, the name “wrecking ball” [came to mind]. People look at it as destruction, but it’s more about, let’s take the best of what was there prior—all the learnings, the boardroom fights, the money, the budgets—take the best of that, knock the rest down like a wrecking ball, and then make something better. That’s been the premise of the company since 2007.

When you started Wrecking Ball, what were some of the basic philosophies and goals that you had in mind?

The philosophy—aside from deconstruct, reconstruct, make things better—was always people first. Also, looking at the companies that we would like to work with, to ensure that they fit culturally. Because once we’ve clicked culturally with our clients, anything is possible.

After we like the people, what is the project that we want to do? If it’s a $50,000 project, if it’s a $2 million project, that’s all irrelevant. If we believe in what it is that our client wants to do, and we can help them to deliver that even better, than all the long nights are worth it. So, really, people first, client first, budget second.

From a personnel perspective, what do you think is most important when you’re selecting new people to come in and be part of that philosophy?

They all go hand in hand. We look for those that are odd or different. Those that strive to make things better. Again, one of the core principles.

College degrees don’t matter. There’s a bunch of our staff who either didn’t go to college or who dropped out.

The biggest one is really trust. Because, as we’re a smaller company with hundreds of freelancers, if someone says they’re going to do something and deliver, that’s it. They’re taken at their word when we have to hit these deadlines for these high-pressure projects. Trust is key.

In the media world, we’ve long said content is king. But you’re adding a twist by saying data and content are king and queen. Can you tell us about great examples?

King and queen are in no particular order, because it’s all royalty, but they work together.

So, for years, all you hear about is big data. It was a buzzword on every front-page magazine for who knows how long at conferences. Most companies still don’t use their data the right way, in a positive way. They’re collecting it—and, look, people came to these different web pages, or we have this much traction, and we sold this many, you know, knickknacks. That’s great. But when you … know who your customer is, and you can give them an experience online or an app that is more tailored to what they do or what they enjoy to buy or consume, you have a customer forever. That’s what we look at with a lot of the experiences we deliver.

During an Adobe summit, there was a product called Target that analyzed with artificial intelligence what the content was that people were consuming during the conference. And based on that recommendations engine, they had six different tracks and were able to up-level content in the library that would be more pertinent to what you’re watching now, rather than having to go dig further and find it.

Amazon has been doing this forever. We do it also with Charter Communications [on the cable side]; if we know that a customer likes horror movies and drama, the action category is not going to be marketed to them as a [priority]. So, content is king because we always need content, and data is king or queen as well. But when you fuse them together, that’s how you get the ultimate experience of what customers are looking for or coming to do.

What makes a project fun and inspiring for you?

Once we click with a client, and we get each other, that’s when the fun starts. With the projects that follow, it’s typically the harder the challenge, the more excited we are. The ones where we say, “Is this possible to even do?”

Midas had a conference coming up at the Hard Rock, a national conference. And this is purely content creation. A lot of us are gearheads here, and we enjoy having them as a client. But the brief for Midas was, they needed a new opening video and something energizing.

We just wanted to have the freedom to, you know, create the storyboard, and to present the ideas and to go out and shoot at the Hard Rock and get their audience pumped up. Unfortunately, it was one of the first conferences to be cancelled by COVID. But at least we had the ability to have fun and just do we wanted to do.

And the same comes on the software side as well. For Adobe, there was a project brief of “We have 3,000 patents, and we’re redoing our lobby experience. We need a fun, interactive, engaging, exciting experience to present these patents on a video wall.” That was it.

My partner, James, started combing all these different briefs of how we can present it. But the catch to this one was that all of their patents were in printed form.

So, the challenge was how do we get these patents into a digital format, create a content management system, build a touchscreen display that nobody’s probably going to be touching now for a while, within their lobby. So, we got to touch all aspects of the strategy and the creative to build this 3D area to play with patents.

But, also, the technology side wrote an app that scoured the Library of Congress for patents that were filed by Adobe, downloaded them, and built a new database and a new content management system. From there, they could display whichever were their relevant patents on the wall, [plus, there was a] new search engine for people to engage with at their conferences or their global headquarters in San Jose [California]. I think this is now running in 10 different Adobe offices globally. That was a small brief, but it had a big impact—and we had fun along the way solving the problem. ♦

Founded in 2007, Wrecking Ball is a team of experienced designers, creative engineers and professional problem-solvers. Strategy, design, content and engineering are the tools it uses to shape brands, build products and spin up weird and wonderful marketing things. From insight to install and beyond, Wrecking Ball takes its clients from crawl-walk to run-fly. Its solutions connect over half a million members on Adobe’s Education Exchange, serve millions of videos on Adobe’s Media Publishing Cloud, is watched by millions of viewers nationwide on the AccuWeather channel, and serves video content on demand to more than 22 million connected devices for Spectrum Cable customers. The firm has offices in Miami and Fort Lauderdale.

The CEO of Wrecking Ball is a 25-year veteran of traditional advertising, digital advertising, software development and media landscapes. He has helped with digital transformations for Adobe, Bacardi Brands, Dolby, Norwegian Cruise Line and Charter/Time Warner Cable. This includes the conception, design, development, integration and execution of award-winning, multiscreen, multiplatform applications and campaigns. Joseph is a board member of the South Florida chapter of the Entrepreneurs Organization and Refresh Miami and has sat on the boards of the South Florida Interactive Marketing Association and Hofstra University’s School of Communications.