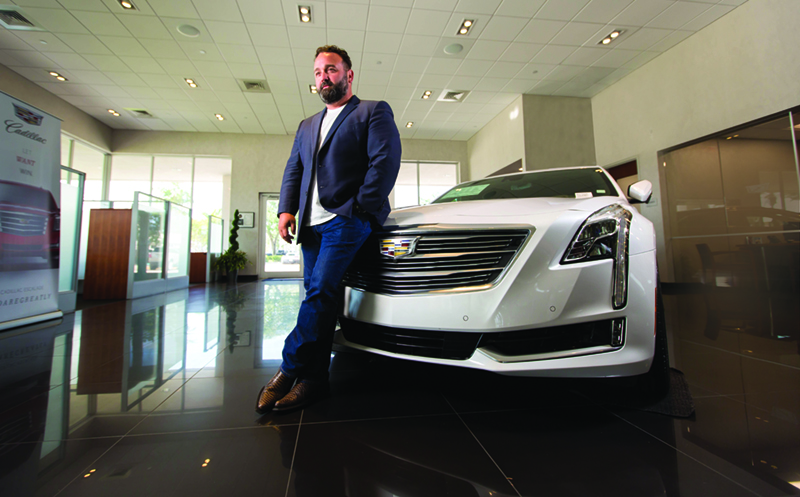 The view from the top is different. Just ask Teddy Morse, the CEO and chairman of Ed Morse Automotive Group.

When he was executive vice president, his father, Ted Morse, often would ask his opinion. Teddy often gave definitive thoughts on what should be done. Sometimes his father would act on Teddy’s advice and other times he would wait to take action. Teddy could get frustrated.

That dynamic changed when his father died after a lengthy illness in 2016. That left Teddy in the position of running a $1 billion company with 15 dealerships and 900 employees.

“When it becomes you making the decision, and it becomes the final say, I understand now about taking the extra day, the extra night to think about what you are doing,” he says. “We have close to 1,000 employees and you figure every person is responsible for maybe a spouse and a couple of children, so what is that—3,000 to 3,500 people who rely on our company doing well? That’s a sobering thought and that’s something that I didn’t have when I was younger. I now have that ability to pause.”

There have been plenty of learning experiences over the decades of working with his father and his grandfather, who founded the company. He just didn’t expect to be running the company in his early 40s.

“I lost my grandfather at the age of 91 in 2012. I always figured, ‘OK, that’s the family genes. I’m going to have my dad until at least in his 80s.’ Unfortunately, things didn’t work out that way,” Teddy says.

However, Ed Morse Automotive Group has passed two of the biggest challenges in family business—transferring control to a third generation.

“How they did that was, my family doesn’t take out the money. We don’t have houses in Aspen and another one in the Bahamas or St. Barts. My grandfather and my father and I try to live beneath our means,” Teddy says. “You take the money and you put it back in the business. You use your money to make money.”

A historic photo of Ed Morse Chevrolet in Lauderhill

The roots of the automotive group go back to 1946. During World War II, Ed Morse earned a Distinguished Flying Cross as a navigator on a B-25 when the pilot and co-pilot were shot and he managed to fly the bomber back to its base in New Guinea. Ed moved to Miami Beach, took a job as a doorman and helped procure rental cars. He saw a business opportunity and started renting out cars himself. He and his father opened Morse Rental Cars in 1946 in Miami’s Little River neighborhood.

When the fleet grew to 2,000 vehicles it merged with National Car Rental, where Ed became CEO, his obituary says. In 1961, Ed entered the retail business by buying a Ford dealership on 163rd Street in Miami. In 1968, he sold the Ford dealership and bought a Chevrolet dealership in Lauderhill, which became the nation’s No. 1 Chevy dealer.

His second major move was the 1979 acquisition of what’s now known as Bayview Cadillac.

Two years earlier, Ed had sent condolences to the widow of the dealership’s owner Conner Brown, telling her how much he appreciated her husband’s advice over the years and how he always wanted to be a Cadillac dealer, too.

Two years later, she was ready to sell. “She told my grandfather that the only one she would sell to was him because she was so touched by his note,” Teddy says. Ed Morse has five Cadillac dealerships now.

While Teddy might have been an heir apparent when he was growing up in Coral Springs, his dad made him work his way up.

The summer before his freshman year, his father asked if he had a summer job. “I remember laughing and saying, ‘I don’t have a job,’ ” Teddy recalls. “He said, ‘Yes, you do. You are going to be a porter.’ ‘I’m not doing that.’ ‘The [expletive deleted] you are not.’ ”

Young Teddy mopped floors, put plastic on the seats, emptied the trash and acted as a general go-fer. The next summer, he got to detail cars coming out of the body shop with a 40-pound buffer to get rid of overspray.

“I remember, my dad one day pulls up in this Corvette. He rolls down the window. ‘Hey, it’s lunchtime.’ I said, ‘Great.’ I put the buffer down and wipe the sweat from my face. He’s like, ‘No, no, no. You have cars to do. I’m going to lunch. I just wanted to know if you wanted me to pick up McDonald’s on my way back.’ ” Teddy gave a profane response. “He just laughed and … drove off.”

Teddy went on to work as a parts driver, technician assistant and assistant service writer. After going to Northwood University (now Keiser), he started selling cars at the Honda dealership. He later handled finance and insurance and became assistant general manager at the Cadillac dealership in Delray Beach.

His first GM job was at Bayview Cadillac in April 2008. Not only was the economy imploding, but the dealership was undergoing a major renovation. Gas spiked to $4 a gallon.

“I have no showroom and my whole inventory is covered with dirt,” Teddy says. “I remember calling my dad and said, ‘Did I do something to piss you off?’ He laughed at me and said, ‘Just relax. If you get through this, the rest of your career will be cake.’ ”

The cake actually got served up pretty soon, since the dealership was named Cadillac Dealer of the Year twice during the four years Teddy was GM. The honor was given to 20 out of Cadillac’s 900 dealers.

When Teddy’s grandfather wasn’t giving Teddy a hard time for not wearing a tie, he also taught him lessons.

His grandfather wouldn’t ask or tell anybody to do something that he wouldn’t be willing to do or hadn’t already done himself, Teddy says.

Teddy had to lead by example, too. He remembers dates talking about weekend parties. His response was always, “I’ll let you know.” While the dealership closed at 9 p.m., he could end up staying until midnight to work out a deal.

He joined the corporate staff in 2012 as director of advertising and marketing. Teddy started running the company as executive vice president during his father’s lengthy illness, but he has plenty of other family members on his team.

One cousin, Brian Danahy, is GM of Ed Morse Cadillac in Tampa, which is a Cadillac Dealer of the Year along with the Ed Morse locations in Sunrise and Fort Lauderdale. Another cousin, Richard Danahy, is director of dealership devleopment. His sister, Catherine Martinez, is an e-commerce consultant.

“It may have skipped me, but a lot of my family is incredibly intelligent. I just hope to ride on their coattails,” says Teddy.

In describing his thought process on making key decisions, Teddy uses a golf analogy. He wants to make sure decisions stay on the fairway and avoid the rough.

“What I don’t want to do is have that thing slice out of bounds to where there is no return and you have lost the ball,” he says.

He still loves Cadillac but wishes it had an entry-level, small SUV.

Ed Morse is clustered in South Florida and the Tampa Bay area. Teddy would like to get into the Orlando and Southwest Florida markets, and maybe have a dealership in another state.

While his father and grandfather shied away from going out of state, technology these days makes it much easier to monitor how a distant dealership is doing, Teddy says. He looks at an array of daily reports, such as unit sales, total grosses, average grosses per vehicle, finance and insurance operations, service, parts and body shops. He believes in the three P’s: Product, people and process.

Customer satisfaction surveys are “wildly important,” he says. “If the customer is not totally satisfied, completely satisfied, you’ve got a problem with the manufacturer.”

There are some challenges for the industry. Some millennials seem content with online interaction with their friends, like public transportation and delay getting a driver’s license. Some futurists expect people will stop owning cars and just summon a driverless car when needed.

Teddy counters that by saying cars represent freedom and the type of car someone buys is often an extension of their personality. He personally enjoys the roar of the engine when he presses on the accelerator.

“Your phone can only take you so far,” he says. “It can take your eyes far away, but it can’t take you. There is a difference between seeing things and experiencing things.” ♦