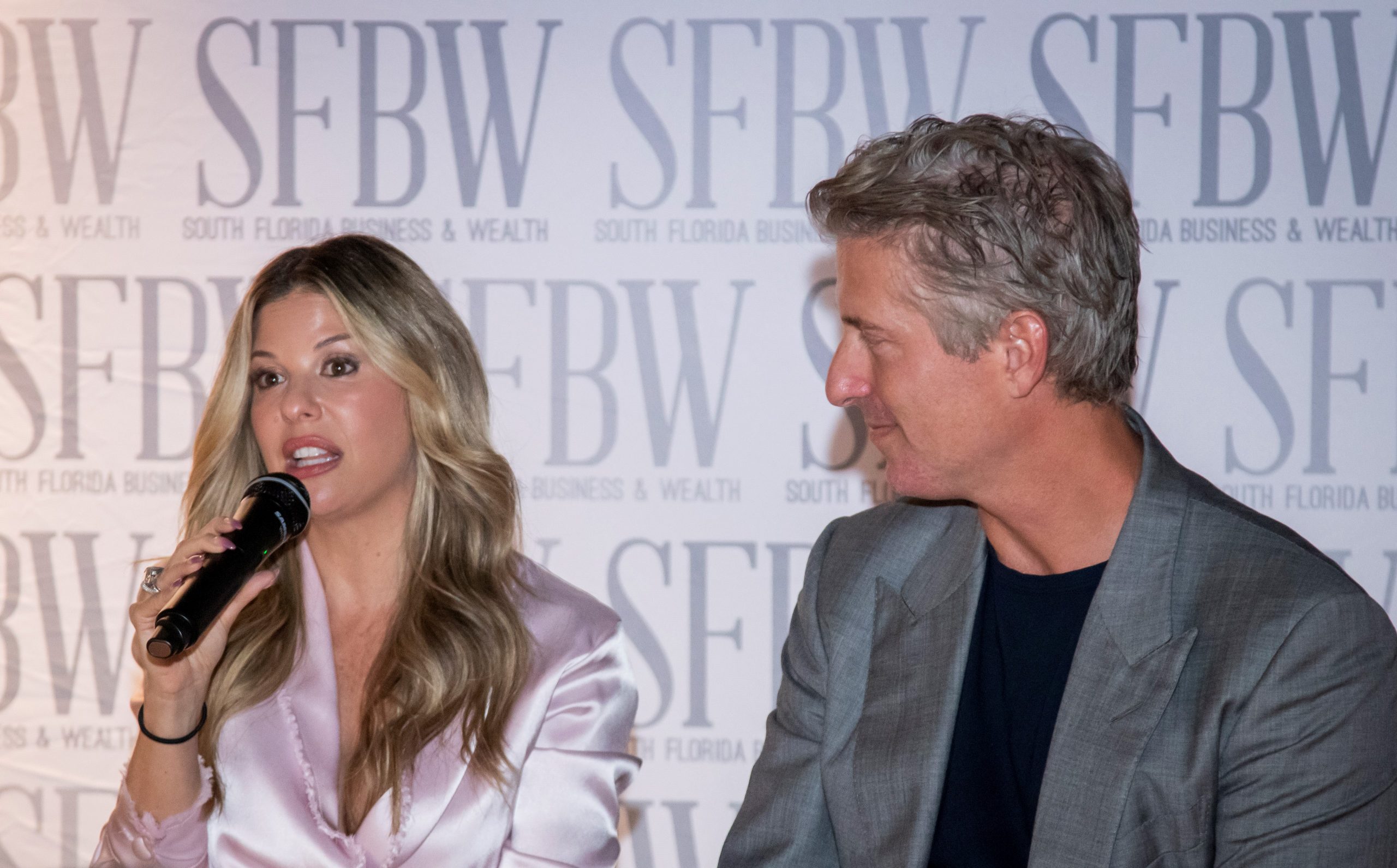 For more than a year, during the most virulent part of the COVID-19 pandemic, SFBW’s “CEO Connect” series—our illuminating and edifying and community-building events—were performed virtually. So, there was a sense of giddiness when we began gathering in person again, and one of our first live CEO Connects was held at Miami’s Red Rooster, the brainchild of celebrity chef Marcus Samuelsson, who launched the original Red Rooster in Harlem, New York. The multiple James Beard Award winner and cookbook author was the youngest person to receive a three-star review from The New York Times and Samuelsson also served as the guest chef for the Barack Obama administration’s first state dinner.

But we weren’t here just for the deviled eggs and the sublime cornbread: Our March cover subjects, Michael Simkins (president and CEO of Lion Development Group; owner of E11even Partners) and Nikki Simkins (CEO of E11even Vodka), who own a stake in Red Rooster, showed up with their three adorable kids in tow to answer even more questions about their Elleven ecosystem of nightlife, vodka, merchandise, real estate and more. Their journey is an only-in-Miami success story, which was on vivid display before a roomful of revelers and friends of the magazine. Here are some highlights.

Michael: It’s 375 units, with a hotel and residences, four restaurants, a wellness center by Deepak Chopra, and it sold out in five months—one of the fastest sellouts in the history of Miami. And we’re currently selling the Elleven Beyond, which is 85% sold.

Nikki: Before we talk about vodka, I want to tell you this hotel and residences. It was during the pandemic and everything was shut down. Most of the world didn’t want to do new projects, because it was a really scary time, and that’s how Michael—the visionary—came into it. He said, “While everyone is not working, I’m going to focus on designing this project.”

On the crypto connection:

Michael: We partnered with [cryptocurrency platform] FTX to allow our buyers to use cryptocurrency for the purchase of a condominium unit—and so far, 62 people have made their deposits with crypto, representing more than $40 million of condo purchases.

On Elleven’s 24-hour nightclub experience and the 6 a.m. crowd:

Michael: If you arrived at 6 a.m. on a Sunday, you would see all these people here. They would still have their clothes on, but they would be having a good time and they probably would have no money left in their wallets.

Nikki: When Michael came home and said, “We should be partners in this,” we actually went to therapy over it. It was a little scary to me to own and be a part of that because we had never been in the ‘ultra-club’ business, so it was nerve-wracking. But it was a life lesson for me. I had all this fear about something that hadn’t happened yet, and it taught me that there is no reason to be fearful of something until it happens.

It’s hard to tear yourself away from the club:

Michael: I’ll give you a story. It was South Beach Food & Wine, about four years ago, and a well-known chef—I won’t mention his name—came to town and had planned events all through the weekend, as a host and a participant. He ended up going to the club on a Thursday night and he didn’t leave until Monday morning. He missed every event and stayed at the club for like 100 hours straight. I don’t know if he got invited back to South Beach Food & Wine.

Why vodka—and why that bottle:

Nikki: I’m actually not a huge drinker, and when I do drink, I only drink Elleven vodka. I did all this research on the health aspects of alcohol. What I determined, after all this extensive research, is that vodka has zero carbs, zero sugar and no congeners—that is the unhealthiest part of drinking alcohol: the chemicals, like formaldehyde and acetone. They stay in your liver and cause the most intense hangover. And we distill our vodka six times. My scope of work was designing the bottle. My vision was about creating Miami in a bottle. It was super important, because we were both born and raised in Miami. It was pretty hard to create something that looks good that we could sell for a reasonable price. We’re going right up against Tito’s Handmade Vodka—but why drink Tito’s when you’re in Miami? The cork comes from Italy; the glass comes from France. The [aqua] foil piece is really intricate to do, and it was really important for us to have this one-one, the 11 logo vertically, so that’s how you see how much of the liquid is gone.

On the best mixers:

Nikki: I drink it the same way all the time: Elleven on the rocks, with sparkling water and a whole squeezed lemon. I’ll have two—maybe—and that’s it.

Michael: Also on the rocks with lemon.