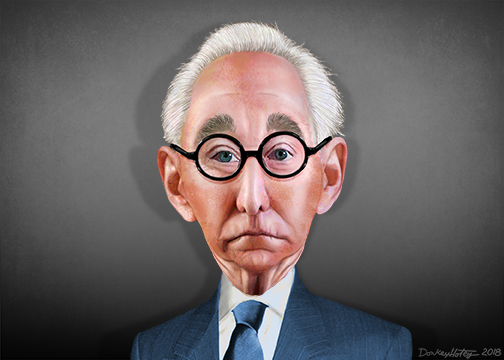 When I met Roger Stone

I heard about the seemingly inevitable listening to CNN on Sirius XM on the way to work this morning: Political consultant Roger Stone was arrested by the FBI in a predawn raid on his Fort Lauderdale home.

A 24-page, seven count federal indictment says Stone committed a litany of crimes, including false statements, witness tampering and obstruction, during an investigation of WikiLeak’s posting stolen emails involving the Hillary Clinton campaign. Stone had long proclaimed his innocence, but predicted in his Stone Zone website that they would eventually come to get him.

After a hearing at the federal courthouse in Fort Lauderdale, Stone said he was not guilty and would defeat charges that resulted from a politically motivated investigations. He said any error made in testimony in Congress was immaterial and without intent. He said he wouldn’t bear false witness against President Donald Trump.

I’ve been wondering for some time whether Stone was the direct intermediary between WikiLeaks and the Trump campaign when it came to the stolen emails connected to Hillary Clinton’s campaign. Stone has said he had indirect communications with WikiLeaks, but the indictment portrays a direct connection.

I’ve been especially interested in Stone because he has a long connection to South Florida and I once had the opportunity to meet him.

That happened back near the beginning of 2008. There was a splashy, fast-growing law firm in Fort Lauderdale known as Rothstein Rosenfeldt Adler and I was editor of the South Florida Business Journal. RRA was not only in the news a lot it spent an immense amount of money advertising with the local media, including the Business Journal.

One day reporter Paul Brinkmann and I interviewed Scott Rothstein in his corner office at Las Olas City Centre, the building that has the Bank of America name atop it. Rothstein extolled the virtues of his hard-nosed approach to practicing law, including having someone dig through trash cans of the opposition to seek dirt. What really struck me, though, was the pronounced nervous eye twitch Rothstein had. It seemed like he was keeping something bottled up. Little did we didn’t know he was in the middle of one of the biggest Ponzi schemes in U.S. history.

After the interview, Rothstein took us to the back side of the building and introduced us to Roger Stone, who was friendly and dapper, living up to his reputation as a clothes horse. I didn’t know that much about Stone at the time, but his office was a shrine to Richard Nixon. There were all sorts of posters and curios connected to Nixon on the walls and in the display cabinets in his office. (I later saw that Stone had Nixon’s face tattooed between his shoulder blades.) There were also photos of Stone with political luminaries, such as John McCain, Arnold Schwarzenegger, Charlie Crist and Rudy Giuliani.

Stone cut his teeth as a political operative in Nixon’s Committee to Re-elect the President. The outfit known as CREEP gained widespread prominence during the Watergate scandal. Brinkmann in a profile wrote that Stone subsequently helped Presidents Ronald Reagan, George W. Bush and then businessman Trump. Trump has been an associate of Trumps for decades, as outline in the movie “Get Me Roger Stone” on Netflix. 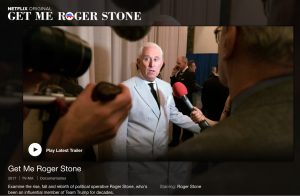 Netflix has a website for its movie about Roger Stone

Add it up now, and there’s a pretty good triangle of Stone, Trump and Giuliani, the former prosecutor and New York mayor who is now the president’s lawyer.

Rothstein said he wanted the best political strategist and crisis PR guy in the business and Stone was the guy. “He fears nothing, but he’s ethical and tough,” Rothstein said.

The statement is laughable given that Rothstein was anything but ethical. Is Stone tough? President Trump has indicated Stone is, saying he hasn’t been a rat like some of the others caught up in the Mueller investigation. Trump seems to have a lot more respect for Stone than Michael Cohen, his personal lawyer for many years.

Stone was active in South Florida politics. He notably claimed a role in the so-called “Brooks Brothers rebellion” in 2000 during the Miami-Dade recount of votes in the presidential election of George W. Bush vs. Al Gore. In 2008, Stone helped Broward Sheriff Al Lamberti get re-elected, but four years later helped Scott Israel defeat Lamberti.

The Sun Sentinel has a good chronology of Stone’s history in South Florida, saying he first publicly mentioned he had contact with Julian Assange of Wikileaks in an August 2016 speech to the Southwest Broward Republicans in Pembroke Pines. He said he passed nothing along to the Trump campaign or Trump himself.

There are some examples of Stone’s alleged tactics in the Sun Sentinel article. For example, comedian Randy Credico says he did some work for Stone on robocalls in the 2008 and 2012 sheriff’s campaigns, imitating Al Sharpton, George W. Bush, Rudy Giuliani and Richard Nixon.

Credico has said he testified before Mueller’s grand jury, mostly about Stone. The indictment outlines what allegedly happened. 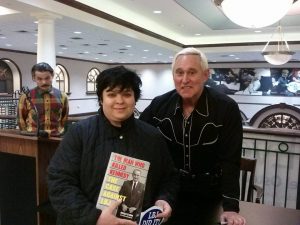 A Wikimedia commons photo taken from Flickr shows someone with Roger Stone holding his book, “The Man Who Killed Kennedy, the Case against LBJ.”

The FBI says Stone committed obstruction of justice by making multiple false statements to the FBI and House and Senate intelligence committees. Stone is also alleged to have attempted to persuade a witness to provide false testimony and withhold pertinent information.

The indictment has detailed information, including references to emails about Stone communicating with the head of Organization 1, who was in the Ecuadorian Embassy in London. (Of course, anyone who follows the news knows WikiLeaks leader Julian Assange was holed up there.) The indictment also talks about text messages related to Organization 1.

The indictment says in his testimony before the House committee that Stone made false statements about his possession of documents relevant to his investigation and his communications with the Trump Campaign about Organization 1.

On or about Nov. 19, 2017, Stone texted Person 2 in the investigation to use his Fifth Amendment right against self-incrimination. USA Today and CNN have indicated Credico, who did the robo call voices in the sheriff campaigns, is Person 2.

“Stonewall it. Plead the fifth. Anything to save the plan’ …. Richard Nixon,” the FBI says Stone advised Person 2. The FBI says another text told Person 2, he should do a “Frank Pentageli” before the House committee to avoid contradicting Stone’s testimony. Pentageli is a charter in The Godfather: Part II, who testifies before a congressional committee and claims not to know information that he does in fact know. The indictment says Person 2 in fact did invoke his Fifth Amendment rights before the committee.

The FBI says Stone ramped up the pressure on Person 2 in an email around April 9, 2018. “You are a rat. A stoolie. You backstab your friends-run your mouth my lawyers are dying Rip you to shreds.” Stone also said he would “take that dog away from you.” Then there was the, “I am so ready. Let’s get it on. Prepare to die [expletive].”

Person 2 told Stone he should have been honest with the House intelligence committee and “you’ve opened yourself to perjury charges like an idiot.” 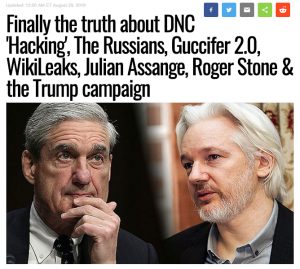 Stone’s attorney, Grant Smith, issued a statement that said, “They found no Russian collusion or they would have charged him with it. Roger Stone is vindicated by the fact there was no Russian collusion.” Stone’s misstatements were due to forgetfulness and were “immaterial.”

Smith also said Stone received no materials from WikiLeaks ahead of their public release.

Smith was formerly an attorney with RRA, but told Brinkmann in a 2010 Business Journal article that he wasn’t aware of Rothstein’s purported business of selling interests in structured settlements of legal cases, which were later discovered to be phony settlements. Grant’s biography on StrategySmith.com says he has been a good standing member of the Florida Bar for 25 years and was once general counsel of an environmental services firm purchased by H. Wayne Huizenga. 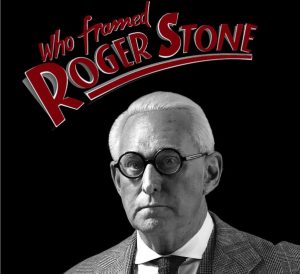 Stone’s Instagram feed had this post after his arrest: This morning’s news is deeply saddening. Robert Mueller’s early morning raid was straight out of the gestapo’s playbook. We must fight for Roger Stone… now more than ever. If they can do this to Roger… they are coming for us next!

Presidential counsel Jay Sekulow released a statement saying the indictment doesn’t allege Russian conspiracy by Roger Stone or anyone else.

A final thought: When I was at the Business Journal, Brinkmann and I sometimes marveled about how major national stories often had a South Florida connection. With Friday’s pre-dawn raid, that’s true once again.