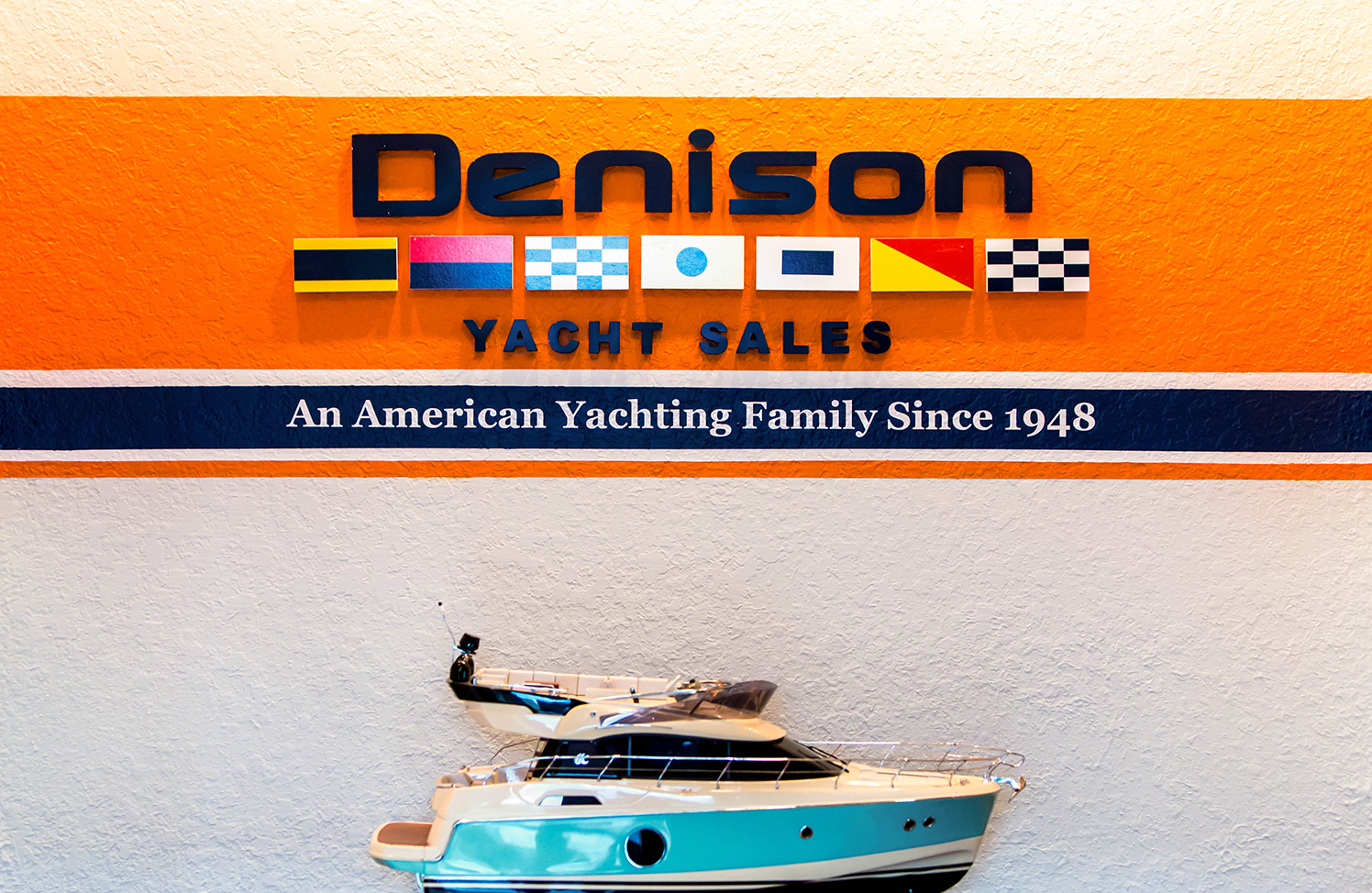 After turbulent seas, Denison family sails ahead in yachting industry

When Denison Yacht Sales owner and President Bob Denison says he’s standing on the shoulders of giants, he not kidding.

The Denison family is synonymous with the history of yachting in South Florida, going back to 1948 when Bob’s grandfather, Frank Denison, bought Dooley’s Dry Dock on the New River just east of Interstate 95 and renamed it Broward Marine.

Bob Denison has built Denison Yacht Sales into a giant with 23 locations, mainly in North America and the Caribbean, but also stretching to Hong Kong. Last year, the total length of the yachts it was sold was 28,412 feet – 95 football fields long.

Denison has childhood memories of running around at company picnics at his family’s boatyard and pretending he was helping – more likely, he was just getting in the way, he says. Later on, he would sweep the parts room or sort PVC pipes. He spent the summers in Saugatuck, Mich., where his grandfather had a second boat-building operation.

Bob says he would try to impress girls with his family’s ownership of Broward Marine, since it was a major employer, but found they were more impressed when he was a bat boy for the Florida Marlins. After getting a degree in sports marketing and business from the University of Miami, Denison went to work with entrepreneurs who worked in the e-commerce and aviation sales and leasing business.

In 2001, Denison says he got the bug to get back into boating, so he went to work for his father, Kit, who was Frank’s oldest son. All of Frank’s sons ended up leaving to start their own businesses.

While Frank was a visionary in the yachting field, he had a temper that sometimes escalated into violence, according to an intra-family lawsuit that was covered in a 1992 Sun Sentinel article.

“He was really good at building boats, but was cantankerous for sure and wasn’t one of the easiest guys to get along with,” Bob Denison says. “But with what he lacked in charisma, he more than gained in being an awesome boat builder.”

The 1992 article told how Frank was fighting his wife, Gertrude, and one of his other sons, Ken, over ownership of Broward Marine. There were big stakes because Broward Marine had 200 employees and sales of more than $20 million a year. Frank ended up in control at the end, selling Broward Marine in 1999 for $40 million. “I was there for 51 years. Don’t you think it’s time?” he told the Sun Sentinel. Gertrude had died two years earlier and Frank died a year later.

The roots of Denison Yacht Sales stem from Kit leaving Broward Marine to start Denison Marine in 1983 – going right into competition with his father. It became a leader in building 100-foot-plus, high-performance aluminum yachts and had a 76,000-square-foot manufacturing facility in Dania Beach. It went bankrupt amid the early 1990s recession. Frank Denison scooped up the assets and folded them into Broward Marine.

Denison operates like a luxury car dealership, Bob says. It sells new yachts, sailboats and catamarans made by Hatteras, Beneteau, Marquis, Carver, Couach, Privilege, Fountaine Pujot and Dufour. When it comes to used boats, the denisonyachtsales.com website allows searches for 13 different brands in eight categories of boats. Marketing is done on a global basis.

Denison is gearing up for the Fort Lauderdale International Boat Show, which is the equivalent of the Super Bowl for the yachting industry, Denison says. “There is no other event that comes close to the economic impact in South Florida. I’m talking about even the Super Bowl coming to South Florida.”

The show brings in thousands of people from all over the world who get to know the city, he says.

Denison is passionate about the yachting industry’s impact and expresses dismay when it’s perceived as benefitting only 1-percenters.

“Whatever port a yacht chooses to go to, it spends about 13 percent of the value of the boat on the local economy,” he says. The spillover is not only just in the marine industry, but extends to restaurants, hotels and grocery stores.

Despite Denison’s current success, the boating industry has a lot of ups and downs, he says. There was the aftermath of the tech bubble bursting in 2000, the Sept. 11 terrorist attacks, high oil prices making it expensive to fuel yachts, the real estate bubble bursting and the Great Recession.

“It seems like every few years there is something that disrupts the boat buying environment,” Denison says. However, yachts are the “epitome of a luxury item” and create magic moments for families.

Denison says he was lucky that he attracted an ambitious workforce. “They were willing to make sacrifices, stay late and treat this place like their own company,” Denison says. “We also had our eyes on the technology ball a lot earlier than other companies in the marketing field.”

Denison uses technology to find customers and communicate with clients so they can keep informed about what’s happening in the yachting market. The website says the company has a database of 25,000 yachting enthusiasts.

“I love being able to fly our orange flags where people are doing this thing called boating. San Francisco is one of the major holes we had,” Denison says.

He’s enthusiastic about the future of boating. For example, new stabilizer technology enables a smooth ride in almost all conditions, which helps attract customers who worry about getting seasick. Improved bow and stern thrusters are making it easier to fit into tighter dock spaces.

By the time his baby son, Rivers, is ready for his first boat, Denison expects he’ll be able to just push a button and the boat will slide into a slip behind a restaurant and tie itself to a dock.

Denison wants to capitalize on the marine industry’s future by building a stronger super yacht division and growing its business lines in crew placement, charter management and retail charter booking.

What seems to be missing now is some of the past drama in the Denison family.

Bob’s father, Kit, and uncle, Skip, are both yacht brokers for Denison. Bob’s brother, Eddy, ran a dance studio with his wife for six years until he also became a broker in 2013.

Bob’s wife, Daniella, is Denison’s yacht marketing manager and brings more than 10 years of experience in graphic design and a degree in web and interactive media from the Miami Art Institute.

So, is there a next generation of Denisons?

It looks that way. Bob’s older brother, Christopher passed away in 2013, but his oldest son recently got his first job on a boat. And then there’s Rivers, who was born in December 2014. As the company’s website humorously says, “He doesn’t know much about boats but is eager to learn.”