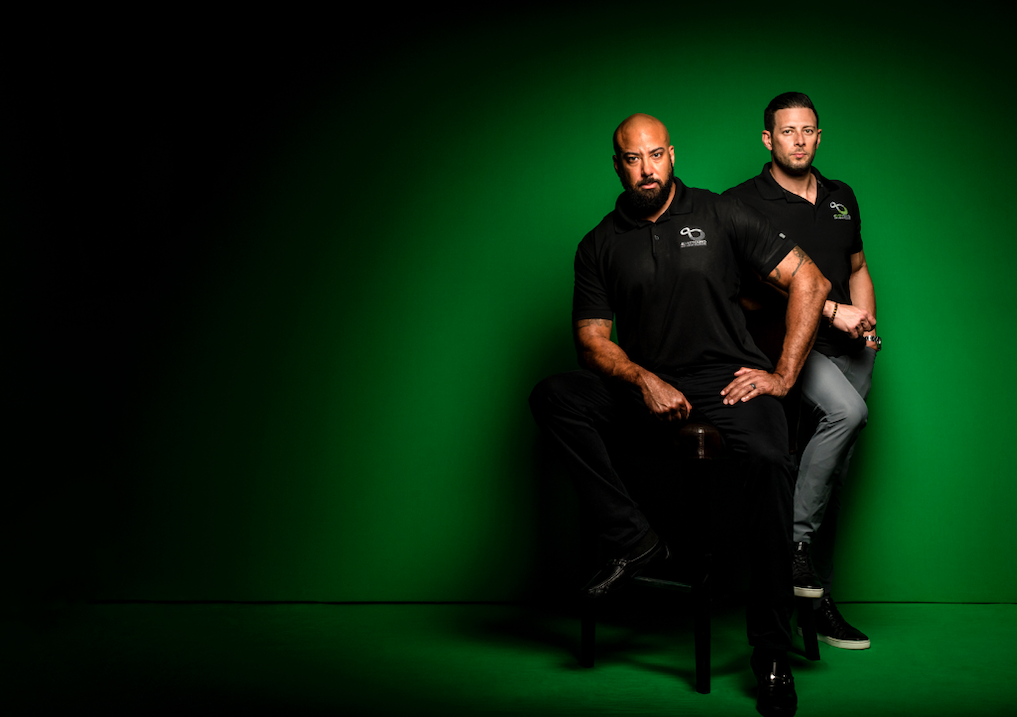 Their Own Best Advertisement

Carlton Washington and Deniz Duygulu once focused solely on their own health and fitness. Now, with 4Ever Young, they’re building a multi-county South Florida tribe built to thrive and stop the clock.

They both grew up worshipping Arnold Schwarzenegger. And their parents wouldn’t let them drink soda. Those commonalities set Carlton Washington and Deniz Duygulu—who otherwise grew up in quite different circumstances—on a path that would lead them to join forces for 4Ever Young. The holistic anti-aging company, headquartered in Boca Raton and Fort Lauderdale, has seven locations (five more in development), from Coral Gables to Jupiter. Next up: dozens of franchises nationwide. If its rejuvenation promises and business growth plans are heady, the company’s manifesto is equally assertive:

“What we offer is in our name. 4Ever Young is the embodiment of a powerful idea: that aging doesn’t have to mean losing your quality of life. We’re a preventative health facility—which means we’re not just focused on treating symptoms. Because traditional doctors tend to only treat patients when there’s a problem, they practice reactively, not proactively. We don’t. We use advanced diagnostic methods and a tried-and-true evaluation process to find out what’s sapping your energy and feeling of wellness, discovering the root cause of any age-related symptoms and addressing them with the latest in modern anti-aging science.”

Let’s put aside the fact that medical doctors do indeed practice preventative care; the trick is to get patients to participate in that behavior. 4Ever Young’s clientele is self-selecting in this regard: They fine-tune themselves just as you would bring in your Jaguar or Lambo for a regular tune-up. Evangelists for self-care, Carlton and Deniz share the ways in which their personal stories of self-improvement evolved into the kind of mission that everyone has a stake in—or should.

Guys, tell me about your respective upbringings and your earliest inspirations in the area of fitness.
Deniz: I was actually born in New York but my family moved to South Florida when I was 3, so I’m pretty much a Floridian. As far back as I can remember, as a kid I was always obsessed with building muscle—Arnold Schwarzenegger was my idol. In high school, I was a wrestler and ran cross-country and I really wanted to put on muscle mass. I didn’t play any traditional college sports—my college sport was weightlifting. I wanted to build my own physique, and eventually I wanted to help others build theirs as well. I had some basic training certifications, but I mostly did my own research, learning from other trainers and coaches. I put things together for myself, but as I gained knowledge, it turned into a personal training career, and that led me to 4Ever Young.

Carlton: My story is kind of fragmented—I was born in the Washington, D.C. area. I lived there till I was 9 years old but then I moved to Mississippi and lived there for a few years, which shifted my development a little bit. Then I came to the Fort Lauderdale/Plantation area to finish out high school. In high school, lifting weights was synonymous with trying to meet girls. My first job was in a health food supplement store. Like Deniz, it was all about building muscle—Arnold was the king; I was idolizing those type of guys. But as I got older, my interests turned into more of a health, wellness and longevity philosophy. It became about avoiding pitfalls like diabetes, obesity and cardiovascular disease.

Was being healthy a priority in your families?
Deniz: Health was ingrained in me from childhood. My parents were very strict about our eating, wouldn’t let me have soda. We never had the cool snacks when kids came over. I was taking Flintstones vitamins at three years old. I don’t remember other parents making sure their kids got their vitamins. I was in my late twenties when my thinking went from looking my best to being my healthiest and looking really good at the same time. So this led me further into nutrition, which led to vitamins and supplements, which then led to hormone optimization.

We always had soda and juice. I remember going to a friend’s home for dinner and they served water and I didn’t know what to do.

Carlton: I was adopted so I never really saw my health history in terms of family illnesses, but my family who raised me were pretty similar to Deniz’s. My mom didn’t allow us to have candy. Water and milk were the drinks of choice. Boring cereals, boring food. But our extended family was the opposite, so that was a treat for me. But as we got older, we watched them pay the price—a lot of amputees due to diabetes, cardiovascular disease, severe obesity. This created a fear in me.

With the onset of COVID-19, a lot of us who’d been very active lost our mojo, becoming couch potatoes bingeing on takeout and Netflix. And then there’s the guilt, because throughout the pandemic we always had the option to exercise outdoors. Is that something you’re hearing from your clients?
Deniz: I’m hearing it a lot. It’s always a similar story: “I was so active and then COVID happened.” I’ve even seen it in some of my friends. Now, I feel like the fear of COVID is starting to diminish, and people are coming to us and asking us to please help them, because now they lack the drive, energy and motivation. Having a sedentary lifestyle and being less active plays a huge hormonal role. Maybe a client had a testosterone level of 700 before COVID, and now he’s at 400 and feels like crap. When testosterone is low for a man like that, it makes it almost impossible mentally to want to get back into that routine and eat right.

OK, say I’m a new client. What’s the intake like?
Deniz: Everything starts with a complementary consultation. We get them to tell us what symptoms they’re having, what their goals are, what they’re looking to accomplish. And we tell them what programs we’re offering, and what the costs would be. If they decide they want to go through the process, we do very extensive bloodwork, probably the most extensive bloodwork they’ve ever seen: blood count, comprehensive metabolic panel, liver function, kidney function, glucose, cholesterol, thyroid, testosterone, estrogen, progesterone, vitamin D3, B12, growth hormone production, adrenal function—that’s really important, especially this year. Adrenals—cortisol, DHEA—indicate how your body handles stress. What else? We do an antibody screening that looks for autoimmune issues.

Carlton, how did 4Ever Young come about?
Carlton: Interestingly enough, Deniz and I met in 2014. I had recently moved back here from Atlanta and at the time I moved here because my wife got a promotion. It was a reluctant move for me, and I was really upset, disappointed and depressed. I didn’t know many people so I got deeper into fitness to keep myself sane. I wanted to do a bodybuilding show and I was introduced to Deniz around the gym community. Before I moved here I was a member of a wellness facility and I needed to get back on my hormone replacement. I went to Deniz to see where I could go. We started toying around with getting into this industry. It seemed like there was an opportunity.

How old were you when you started hormone replacement therapy?
Carlton: 28. I had a corporate job in banking and I’m sitting at a desk all day in a suit and tie, stressed out of my mind, trying to hit targets and numbers all the time. I was making it to the gym less consistently than I’d ever had in my life. I was falling asleep at my desk, mood issues, low libido. I had my testosterone tested and it wasn’t optimal, so I went with the program. In two to three weeks, it changed my life. It’s just been a huge factor in any success that I’ve had—family success, business success. When I moved here, it was a struggle to find a place down here that I could trust. And I met with Deniz and we talked and agreed to just go for it. It really wasn’t that complicated. I’ll let Deniz speak for himself, but we didn’t have anything to lose at the time. There was more upside than downside.

Who were your investors?
Carlton: Deniz and I scrounged up whatever we could get our hands on—cash, credit cards. We formed the LLC in May 2014 and opened our doors in August 2014. We had a third investor, but five months after opening, we bought him out. And it just became Deniz and I, and literally about a month after that is when our business took off.

Do you have clients in their prime earning years, but they’ve let themselves go physically, and they know something has to give? They’re ready to work less and earn less to commit the time to their health. Do you have clients like that?
Deniz: I don’t really hear that, because when patients come in and get on a program with us, I feel like they make more money, because they’re in a better mental place. I’ve seen friends of mine get on hormone replacement and mentally they’re more motivated and driven. They’re no longer sitting at their desks at 2 o’clock with their eyes shutting. They can wake up early and get their exercise in, which motivates them for the rest of the day. And they have more energy to play with their children. It puts them in a better state of mind all around.

Carlton: I always tell people, “You on hormone replacement will always beat you without it, always, in any category.” Whether you’re 30, 40, 50, 60—there’s no comparison.

Do you have doctors on staff who consult? That’s the first thing a lot of people will ask.
Deniz: All of our locations have a medical director—a doctor—and then we have nurse practitioners and physician’s assistants. They advise about dosages and whether a patient should be on it or not. What separates us is that we’re not just a hormone clinic. Because of the extensive bloodwork we’re doing, we’re helping people optimize all of their health, from nutrition to exercise tips.

Carlton: I went up to a woman in the gym, and told her I’d really love her to come in and do some facial treatments and other therapies, and I was talking to her and I could see that she was looking at me, thinking I’m going to be doing her facial. And I said, no, we’re not doing facials, we’re not the doctors—the whole facility is medically staffed. We are behind the business.

Well, you can’t really blame her—you guys are the best advertisement for the brand. Tell me a success story besides your own.
Deniz: One of our clients started with us, early 50s, out of shape, and he took full advantage of the program. It changed his life. He told us he loved what we were doing, and if we ever franchised, he’d be our first franchisee. Now he owns our Delray Beach location.