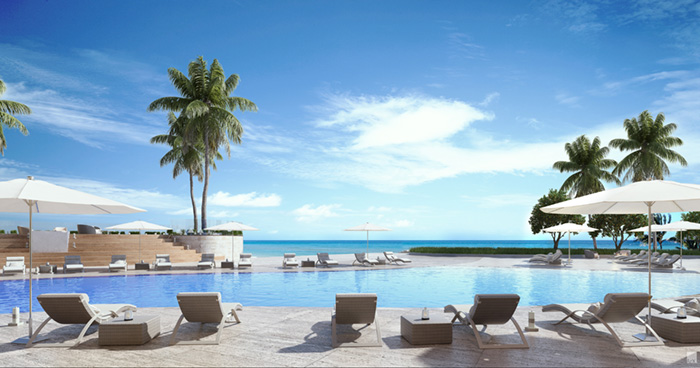 Interiors by Steven G. put its touch on the living room of the last penthouse left at Sabbia Beach

Officials for the Sabbia Beach oceanfront condominiums report they have a penthouse under contract for $934 a square foot, which is a record for Pompano Beach.

SFBW profiled the city in the December issue, and the luxury residences are is a symbol of the city’s revitalized beach area, which has received a $32 million makeover. The beach’s $16 million parking garage recently opened near Sabbia Beach.

“It is extraordinary that Penthouse D is under contract for the highest price per square foot in Pompano Beach history,” says Danny Salvatore, a partner in Fernbrook Florida, the developer of Sabbia Beach. The last penthouse was being listed at $5.9 million.

While the price is high by historical standards in Pompano Beach, it’s a relative bargain in South Florida, where some Miami Beach condos have gone for $3,500 a square foot and some of the new condos in Fort Lauderdale have hit $1,500 a square foot.

The 19-story, 68-resident condo is now 65 percent sold, and the developer closed on $45 million in construction financing on June 3. Completion is expected in 2018.

Arquitectonica oversaw the architecture, and Interiors by Steven G. is handling the interior design.

Martin Hill had problems with a fussy baby during feeding time and needed a free hand, so he created the Beebo, a device he could drape over his shoulder to hold a baby bottle.

Brian Melzer thought there was an opportunity to launch a cool line of household products and created Epoca International.

The three entrepreneurs were part of the Boca Raton Chamber of Commerce Biz Pulse lunch in June, at which SFBW Chairman and CEO Gary Press served as moderator. One question was how much support the panelists received from those around them when they launched their ideas.

Hill said there was nothing like his product on the market, and his family and friends told him it was a great idea. He got extra validation when people in restaurants saw him using the Beebo and agreed how helpful it was.

Biscuiti says the original Chestee was a T-shirt that received mixed reaction. Being open to criticism allowed her to evolve the design into more of a sports bra that features padded shoulders, where barbells can sit when doing squats.

Melzer said he had a restaurant in New York City and was acquainted with buyers at Macy’s. They told him if he came up with nine key items that Macy’s would be able to sell them. He went to China to accomplish his goal.

Safeway, the nation’s second-largest supermarket chain, has made its first foray into South Florida with a store in Oakland Park that looks like a cross between a Publix and a Fresh Market.

It is one of three former Albertsons grocery stores that Safeway has converted in Florida. The others are in Largo (near Tampa) and Altamonte Springs (near Orlando).

Albertsons and Safeway are both owned by Cerberus Capital Management, which manages more than $30 billion in investments. Its chairman is former Treasury Secretary John Snow, and the chairman of Cerberus Global Investments is former Vice President Dan Quayle.

With that much money, it’s clear Cerberus can see how the initial stores do and then decide whether to proceed. A company statement said it was focusing on the initial three stores for now.

See more photos of the store at SFBWmag.com.

While it’s already nice to hop aboard a private jet for your travel, Fort Lauderdale Executive Airport (FXE) just got a way to make it easier.

FXE has added a global entry kiosk, which allows preapproved, low-risk travelers to get expedited entrance to the United States. It works by scanning their passport or resident card plus their fingertip, with the Customs declaration completed online.

While travelers at major airports usually are stuck in long lines in big, drafty buildings, FXE opened a cozy-looking customs facility last October. That’s where the kiosk is.

The airport, which is owned by the city of Fort Lauderdale, also announced it has been authorized by the Department of Homeland Security to serve as an entry point to and from Cuba.

Add the two together and you can come back from Cuba and clear Customs quicker than you could smoke a Cohiba mini.

The Residences by Armani/Casa were designed by renown architect César Pelli. The pool area looks over the Atlantic at Sunny Isles Beach

The Residences by Armani/Casa were designed by renown architect César Pelli. The pool area looks over the Atlantic at Sunny Isles Beach

The Residences by Armani/Casa in Sunny Isles Beach has obtained a $305 million construction loans in what is being called South Florida’s biggest condominium financial deal of the year.

The loan shows the continuing strength of high-end projects on the ocean this year even as some areas experience slowdowns in sales and buildups of inventory.

Partners Dezer Development and The Related Group obtained the loan from Wells Fargo and the Blackstone Group.

The project, which expected to be finished in early 2019, is notable for the big-name architects and designers involved.

Architect César Pelli also designed the Adrienne Arsht Center for the Performing Arts and the Petronas Towers in Malaysia. The interior is by famed Italian designer Giorgio Armani’s Armani/Casa.

One of the keys to getting the loan was that more than 70 percent of the building’s 308 residences are under contract, for a total of more than $700 million in sales. That indicates sellout could be close to $1 billion.

OK, many South Floridians and visitors know Wynwood is hip and cool, but national real estate company Cushman & Wakefield has given it an official seal of approval. Wynwood not only makes C&W’s inaugural 100 Cool Streets report, but ranks it in the top 15.

Wynwood meets the criteria of hip arts scene with a new and edgy retail district. Warby Parker Annex (eyewear), Shinola (watches, leather goods, bicycles) and Illesteva (eyewear, bags and umbrellas) were some of the stylish retailers mentioned by Greg Masin, senior director of C&W’s South Florida retail team. “Wynwood is evolving quickly,” he said in a news release for the Cool Streets report. “Pedestrian traffic continues to increase and a soon-to-be-announced exit off of Interstate 95 at 29th Street will enhance access and further drive traffic.”

Office users are looking at the neighborhood, but it needs more of a residential component, Masin said.

Miami International Airport is inching closer to getting the long-awaited, nonstop service to Asia.

Republic of China (Taiwan) President Tsai Ing-wen landed at MIA on June 24 after a 16.5-hour, 8,628-mile nonstop charter. While MIA has regular cargo service to Asia, the president’s trip was hailed as the first nonstop passenger trip from Asia to the airport.

The China Airlines flight was on a Boeing B777-300ER, one of the few aircraft with the range to make the trip. Tsai made a stop on her way to the grand opening of the Panama Canal expansion.