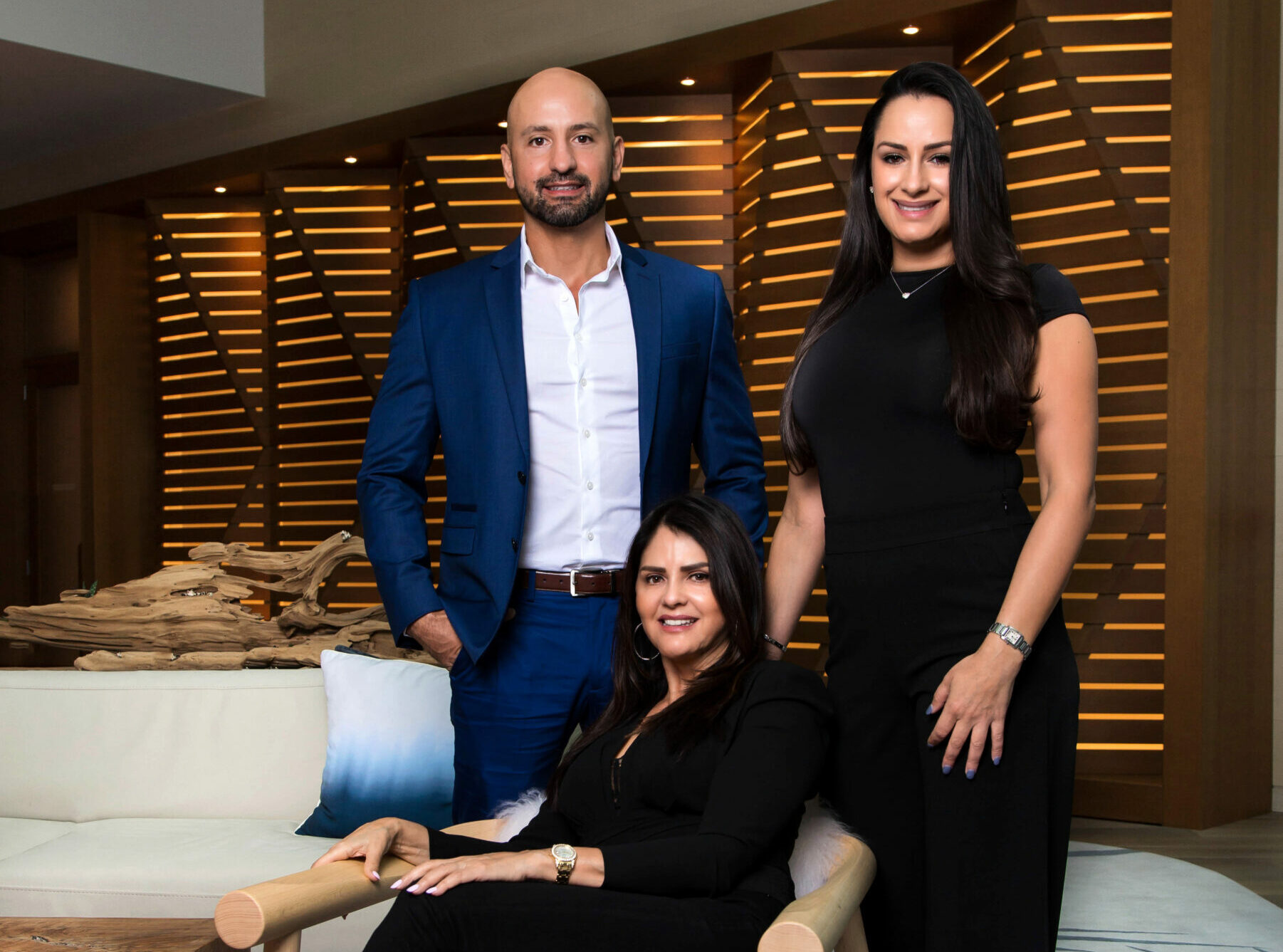 The secret to Maritza Meza’s, GianPierre Giusti’s and Gigi Giusti’s success can be summed up in one simple idiom: They live the life. This familial trio represents Fort Lauderdale luxury waterfront condo lifestyle as residents of its most prestigious high-rises, so no client would likely be surprised to learn matriarch Maritza and her son, GianPierre, have brokered more than $1 billion in real estate transactions in just over a decade, from their storefront office on Las Olas. And her daughter, Gigi, is part of a team that achieved $40 million in combined sales in just months at the new 100 Las Olas mixed-use condo tower alone.

Though Maritza’s father was a real estate developer in Peru, her home country, when Maritza moved to South Florida three decades ago after starting a family she was armed only with a bachelor’s in business management—and good instincts. “At that time, Fort Lauderdale Beach was prime for a facelift,” she recalls. “It just needed the right developers with the vision and foresight to see its true potential.” Soon she became sales director for the Related Group’s new Las Olas Beach Club and, in time, sold nearly all 12 of the property’s tony penthouses and successfully closed out the building. Today her focus is largely in-house pre-construction sales at Auberge Beach Residences & Spa, the resort-style property where she also resides.

By the time her kids became teenagers they sought to emulate their mother’s success. “At 18, I made a commitment that I would no longer work for anyone but myself,” explains GianPierre. Formerly a nightclub promoter, he had a plan in place by the time the market crashed in 2007: “All these developments my mother had sold were complete. I said to her, ‘Since you know these owners maybe we could help them sell before they lose it all.’”

The duo started acquiring and successfully selling exclusive listings from high-end condo buildings and attracted the attention of Coldwell Banker’s president. “We signed the next day,” he says. “That’s how my mom and I founded Meza Group. My first transaction happened within 30 days. It was a sale for $5.5 million.” Since then GianPierre, Meza Group’s president, says he and Maritza sold an $8.6 million condo residence at Auberge (Fort Lauderdale’s most expensive condo resale through 2019) and the most oceanfront condo sales in Fort Lauderdale throughout 2019.

His younger sister started her real estate career in resales but parted ways professionally with the family a few years later, deciding new construction was her passion. “We’re always working together as a family, just not under the same umbrella,” explains Gigi, who works at Douglas Elliman as a sales agent for new development projects. “My brother does AIA to the beach and Las Olas to Oakland and Mom is at Auberge, but I’m more the downtown girl.” Today Gigi is part of the lead sales team at 100 Las Olas, a property boasting units with generous square footage and open-concept design, starting at $999,000. One two-story penthouse and only 25 percent of the total inventory remains.

In the meantime, GianPierre and Maritza say they are having their best year to date, focusing on Four Seasons Private Residences Fort Lauderdale (currently under construction), Auberge Beach Residences & Spa, The Palms, L’Hermitage, Paramount Residences and Las Olas Beach Club. Their niche: having intel and providing savvy advice. “I consider myself an educator,” he explains. “Is the listing value above or below market? Why? What’s the most desired floorplan? What are the rental restrictions? Would it be a good investment? If I can provide you security and comfort, my job is done.” To that end, GianPierre recently restructured his organization to focus on marketing outreach, creating content for social media platforms and sharing market tips for the masses.

The changes are coming at a time when the family expects to have their best year yet. “We’re seeing a major shift in the market,” Gigi says, “with the amount of people coming in from the Northeast and California. There’s huge demand. The first thing driving demand are the tax benefits.”

Maritza adds, “Interest rates are now at an all-time low. It’s a great time to sell. In addition to low property taxes and no state income taxes, Fort Lauderdale offers a lifestyle like no other. It’s a very unique city lifestyle if you want it, but it also is a resort lifestyle, as well. In my opinion, Fort Lauderdale is the jewel of the thriving South Florida market, which is one of the best markets in the nation.”

Gigi, who is also a co-owner of the new Legacy Fit gym off South Andrews Avenue, agrees: “I’ve been living downtown for over 10 years. I love it. I live what I’m selling—I literally live the lifestyle. Fort Lauderdale will always be home for me. My family, for sure, is a big part of that.”