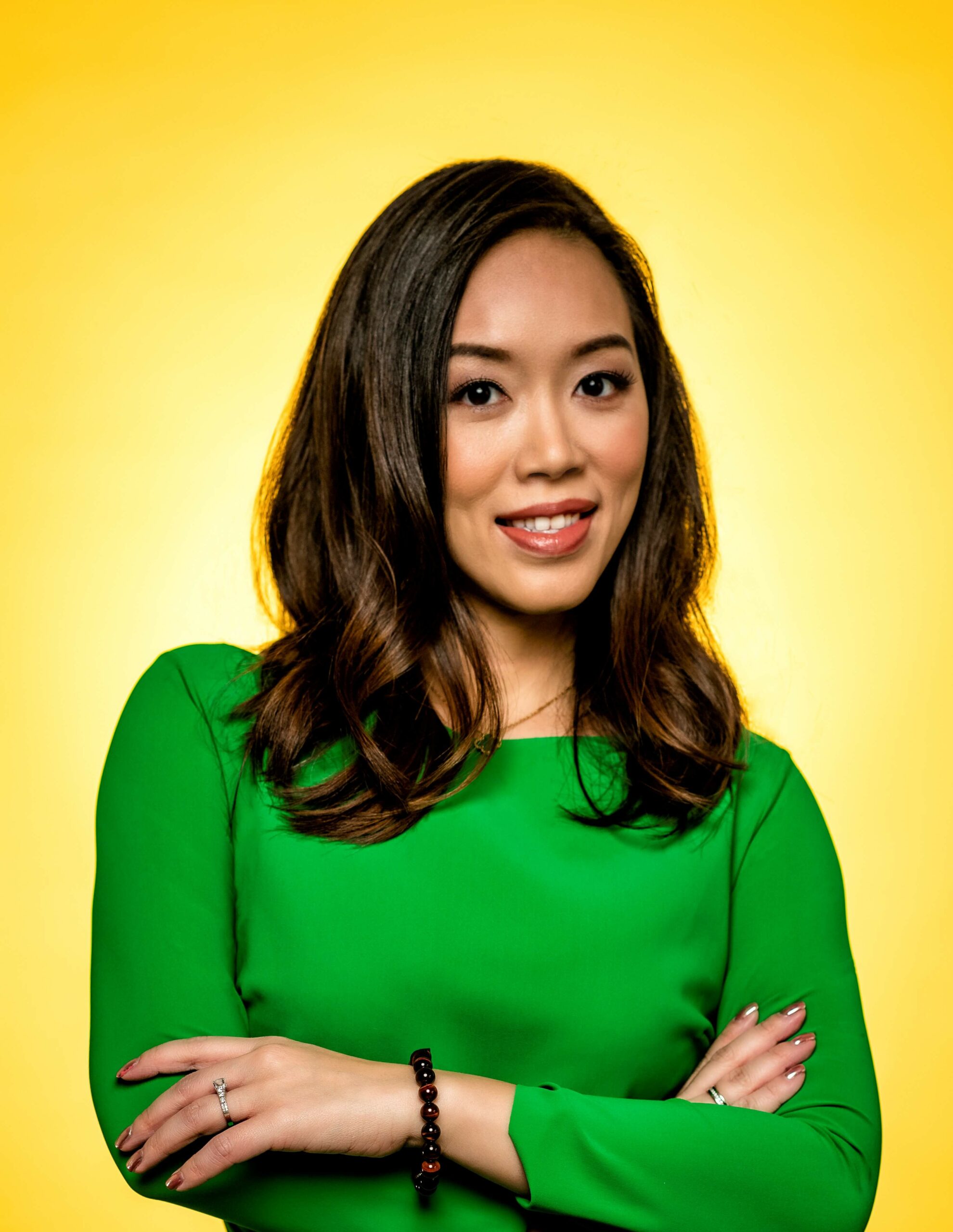 Maggie Vo’s life story began unusually, dependent on both fate and her own unconventional choices. Born and raised in Vietnam, she came to the U.S. 17 years ago, but not before singing with a Vietnamese pop band for three years. By the time she landed in upstate New York, she had one year of high school left, which she spent at Warwick Valley High under the watchful eye of her host parents. “I still remember what it was like to land in JFK at 2 am,” she says. “My host parents picked me up—I’d never met them but I stayed with them for a year. That’s how my journey in America started.”

It was a journey that led her to college in Kentucky, a year of study in the U.K., and eventually to her South Florida. “Before you can decide where you want to stay,” Vo says, “you need to travel. You need to see where you will thrive and swim the fastest. I picked America as my second home because here it doesn’t matter where you come from or the color of your skin. What matters is whether you can do the job and do it effectively.”

Today, Vo lives in Boca Raton, helping to guide the fortunes of Coconut Grove-based Fuel Venture Capital. “The fund was established in 2017 at $185 million and we’re in the process of raising money for the second fund, which is more fintech-focused,” Vo explains. The fund’s two managing general partners are Vo and Jeff Ransdell; the latter spent two decades at Merrill Lynch in various senior roles, culminating in the position of managing director and division executive for the Southeast, Latin America and the Caribbean.

What gave Vo the gumption to hold her own with such a seasoned partner? It was actually those three years fronting a band that helped her with confidence and public speaking, even though her work now calls for an entirely different type of performance: “I identify investment opportunities and present them to the committee, which then votes on whether or not to invest.” Vo opens up the chapters of her varied life to SFBW.

MAKING YOUR OWN LUCK

One thing on your resume that immediately jumped out at me was your education in at Centre College in Kentucky. There’s a story there.

The reason I picked a small, liberal arts college instead of a big university is that I wanted a well-rounded experience and culture. I was a double major in mathematics and financial economics. I studied abroad in the U.K. at the University of Reading. I graduated Phi Beta Kappa at the height of the financial crisis in 2009—it was a tough year to graduate, especially as an international student.

And then you took an analyst job at a railroad company in Kentucky.

Yes, you must get a job within 90 days after graduation in order to remain in the country.

What I love about your story is that a random event—a storm—provided a stroke of luck.

On the way back from New York to visit with my family, the flight schedule was changed due to bad weather and I ended up seated next to a man who would impact the course of my career. He was reading an investment newsletter, and, curious, I looked over his shoulder for a “sneak peak.” The man turned and handed me the publication—“You want it?” he asked—and we chatted during the flight to Atlanta. He turned out to be the chief investment officer of the hedge fund in Boca Raton. I told him about my past work in investments in Vietnam and Singapore—short-term assignments for Prudential.

Yes. The man handed me his card and asked me to contact him. Later on we became very close and he told me hadn’t expected to hear from me again. He told me that most people, when they don’t see something in it for them immediately, they walk away. But I started calling him once a week to pick his brain—to enhance my knowledge about investments, and talk about macro-economics, the stock market, fiscal policy, anything.

Did you explicitly ask him to be your mentor?

I totally agree. He didn’t have a position open at the time but he encouraged me to take the Chartered Financial Analyst exam. It’s one of the hardest exams in the financial industry, a three-level exam offered once a year. If you fail, you have to wait another year, and you probably forget what you learned. I took the first level and I passed it with a very high score, so I said to him, “I did what you asked, don’t you think it’s time you open a position for me so I can continue to the next two levels, move to Florida to contribute to your hedge fund?” So he asked the CEO to open a position for me and they sponsored me. So I moved to Boca Raton. I tell that story to a lot of people and to them it’s like I got on a plane, met a Hollywood producer and became a movie star. Normally to get on the investment side you have to move around a lot on the sales side—killing yourself with long hours before you get to the buy side. But I immediately went to the buy side, working for a hedge fund.

Why did you decide to forge your career in South Florida instead of New York?

I chose to go to school in Kentucky because I knew that there, my background would be unique and would let me stand out. In Kentucky, you can count the number of Asian people on two hands. Choosing to be in Florida—same concept. I felt that with my skill set, my CFA and my education, in New York I would just be a commodity, because so many people in New York know how to do the same thing and have the CFA just like me. I knew that if moved I moved to South Florida, my skill set would be very appreciated and recognized.

After you moved to Boca Raton, starting in 2011 you spent more than six years as an investment associate and then a portfolio manager at Blue Shores Capital. That chance meeting on the plane led to a long tenure. What prompted the move to Fuel Venture Capital?

The reason I made the move is that I love investment, and my goal was to work in different asset classes. I moved from public equity to real estate in Singapore, then to a hedge fund in Boca Raton, but by 2017, I noticed that the money was flowing into private equity. I watched the money move and I watched the opportunities, and a lot of my clients wanted to gain access to opportunities to invest a little bit early—and not just wait for a company to join the stock market when it’s already too big to invest in. So they really pushed me to find opportunities for them. That’s how I decided to make the move from the public market into the private market.

We’re just coming out of such a fraught year. What is your perspective on it, and what sort of counsel do you give to clients, family, friends?

When I talk to my family, friends and clients, I always say that ten percent of our lives just happens, but 90 percent is how we react. I understand that the pandemic is tough and impacts people in a lot of different ways, but I try to look at things from different angles. We invest in a lot of technology companies, and you would think that during the pandemic it would take a long time for people to adapt to new tools and leverage technology. A lot of enterprises talk about using AI and cloud technology, but they are so far from that—they probably only like saying that more than executing it. But the pandemic gave people no choice—they had to explore. The pandemic caused us to slow down—in my fund, we had a moment to look at things from different perspectives. We could pick up initiatives that we had set aside for a while but are important.

YOUR OWN BLUE OCEAN

What’s the most exciting thing about your day?

That every day is different. Some days I sit down with investors with their portfolios and review the achievements and performance. Another day, I’ll sit down with the founders to help them operate the company in a more efficient way. These things challenge me. For the past 17 years in the U.S., every single year I have to set a plan for myself. It’s just my personality, to avoid boredom. A lot of my friends saw me studying the CFA for three years and then they thought I could take a break and hang out with them. I was like, Don’t even think about it, because after the CFA, I knew that I would come up with another plan. This job has allowed me do different things every day and has pushed me to explore my potential.

With two managing general partners, what’s the division of labor?

Jeff and I work well together. We both came from the public markets—we come from the same background and speak the same language. Our personalities complement each other. He is more top-down, big-picture. I am more number-crunching, detail-oriented. So when investors sit down with us, they listen to Jeff’s story, and then get into the numbers with me to see that everything is matching.

The left brain and the right brain.

Given my math background, I always knew that my left brain was stronger. This job allowed me to improve my right brain. When you work in VC you have to know not only how to step onto the horse—you have to know how to drive the horse into the future. If you just based everything on the numbers, the metrics of a company, you would not invest in anything at all. So this role allows me to balance both sides of my brain.

Tell me about a Fuel Venture success story.

I sit on the board of Ubicquia, a 5G company. I heard about the company in 2019. They have a technology to leverage 360 million streetlights. This is tied to my philosophy—you leverage what is already there, because building from scratch takes a lot of time and capital. But streetlights are already everywhere, and you can transform them into smart streetlights and turn them into wifi access points, free public wifi. We invested in the company last year and it has grown exponentially. It is solving problems, making the city smarter and more connected—and safer. The audio and the video can help with crime solving.

We’re all aware of the big exodus from New York and Silicon Valley. How does the Miami area compete?

Fuel Venture was established in 2017 in Miami because Jeff and I know that if you want to found a venture capital fund, you want to be a bit different. You don’t want to go to Silicon Valley or even New York, because then you’re behind the game. There’s a book called Blue Ocean Strategy. Basically, if you follow what others are doing in business, you put yourself in a red ocean, a bloody ocean, and the only way to compete is to reduce price and hurt your market. The only way to compete is to create your own blue ocean and swim in it.