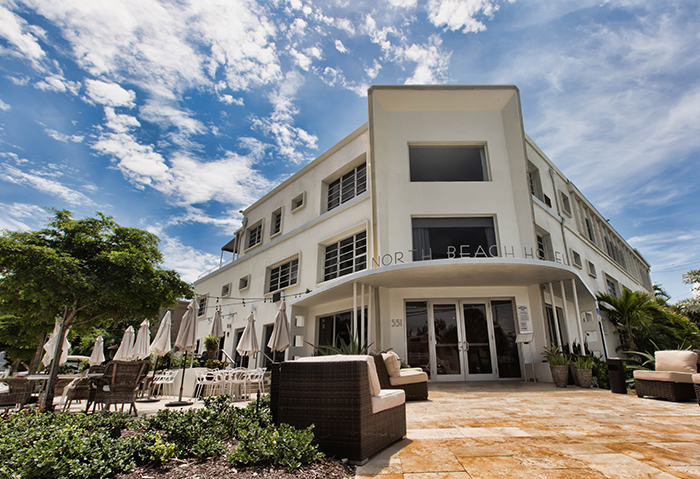 In 2008, in the midst of the recession, Swedish entrepreneur Par Sanda purchased over 30 run-down properties just a block off the beach in north Fort Lauderdale. Since that time, with a clear vision in mind, Sanda and his team have invested $100 million in developing North Beach Village. Within a 1.5-mile radius (starting directly behind the W Fort Lauderdale to the south, spreading west to the Intracoastal and north to Vistamar Street), they have renovated 15 boutique hotels, launched a full-service cafe and a separate outdoor bistro, host popular monthly pool parties and are opening an art gallery” and they’re just getting started.

“When Sanda first came to Fort Lauderdale, he truly felt he was in paradise,” explains Christine Sposa, VP of operations for North Beach Village (NBV). “He knew he wanted to share paradise with many, and he feels that we can create a European village feel with plazas and bistros and places where locals and tourists can gather and converse.” As for buying dilapidated properties when no one else would (or could), Sposa says, “It’s like there was a fire, and everyone ran out. But we ran in – and we had some hoses!”

The hotels of NBV are a rarity in Fort Lauderdale –
boutique-sized and affordable, boasting midcentury modern architecture with contemporary interiors, all just a block from the beach. The properties share a spa and fitness center (at the Royal Palms Resort) as well as bike rentals, a large cafe, yoga classes and numerous special event spaces.

The design element is of particular significance in this area, as the MiMo style has been mostly contained to Miami. Dev Motwani, president of Merrimac Ventures and co-developer of upcoming neighbor the Gale Boutique Hotel & Residences (previously the historic Escape Hotel), says, “The architecture is an important part of this neighborhood’s story, so we’re excited to be restoring and preserving some of its most iconic buildings.” NBV hotels also feature vintage-inspired interiors designed by fellow Swede Ulrika Kristofersson, as well as pop art installed throughout the rooms.

With a total of 500 rooms (600 by end of year), NBV properties include the flagship North Beach Hotel, AQUA Hotel, Tranquilo Hotel, the newly finished Flow Hotel and more. Additionally, rather than disregard the “all-male, all-nude” history that made these hotels popular in the 1970s and “80s (before much of the area fell into disrepair), Sanda designated three hotels as male LGBT properties: Hotel Lush Royale, Grand Palm Plaza and Elysium Resort (where clothing is optional).

Sposa explains the vision for NBV is one of inclusion, as well as creating an overall community feel. “We use the term “Village Life,” she says. “Because when you do enter, it’s a relaxing place to be – to kickback, enjoy, spread love and happiness.” And Village Life extends well beyond the NBV hotels. “We share our village with many neighbors – some big hotels (Hilton, the W), some condos” They all think of themselves as being in North Beach Village. It’s a community, and we are all chipping in to make it better and better.”

The fun, love and happiness mentality of NBV does not just apply to hotel guests. The area hosts numerous events and houses a variety of outposts of great interest to locals. The Royal Palms Resort has become known for its monthly “Mod Saturdays” pool parties, when up to 100 revelers gather to celebrate the past and embrace the future. “Each month, we make it better, add a twist, different DJs and specialty drinks,” Sposa says. The hotel also hosts a “Sunday Funday” pool party, which used to be directed at the LGBT crowd, but now draws a wholly diverse group of partygoers. Both events are expected to increase in frequency as their popularity grows.

The North Beach Hotel is also home to the Village Cafe, a charming and popular indoor-outdoor restaurant that features entertainment every Saturday night and hosts a series of cultural dinners (Italian night, Colombian night, etc.). And, at the corner of Breakers Avenue and Belmar Street is a quaint outdoor piazza that the village runs as the Plaza Bistro during high season. Using a food truck as an outdoor kitchen, the bistro delivers full meals in a casual European setting.

The village also boasts numerous event spaces, including a 1,200-square-foot ballroom and rooftop at the Royal Palms. The location is great for everything from weddings (Sposa hosted her son’s nuptials here) to pop-up restaurants, like this summer’s sold-out Hardy Park Bistro and Nacho Bizness events.

Expanding on the European vibe, this month, the village will be opening an art gallery directly across from the cafe on Breakers Avenue. The goal of the gallery is to offer pieces that are affordable and that “capture the art that will be symbolic of the area,” Sposa explains. The eventual vision for this street – and one that the area is working on in conjunction with the city – is to widen the pedestrian walkway, or possibly even close off traffic all together (a la Las Ramblas in Barcelona).

Potential plans for the future of NBV (the group still owns six undeveloped properties as well as vacant land) include residences, a market, mini golf, a retro ice cream shop and more. “We have a lot of options,” Sposa says. “Seeing how people react as I’m showing them around reminds me how great this area really is. Everyone is like a kid in Disney World, their eyes open wide, and they say, “This is an amazing place, it’s like the best-kept secret.”” Not anymore.

Just a couple of miles due north, another neighborhood is quietly making its mark on the Fort Lauderdale scene. A small section of North Beach, anchored to the west by Bokampers Sports Bar & Grill on Oakland Park Boulevard and to the east by A1A, has grown into a quaint neighborhood of restaurants, residences and friends. The few blocks from Northeast 32nd Avenue to Northeast 34th Avenue have recently sprouted some wonderful new businesses.

Outposts such as Fishtales Restaurant & Nightclub, known for its live music, Blue Jean Blues jazz club, Italian restaurant La Dolce Vita and the kitschy 4:30 Boardroom Bar make for an exciting and eclectic night scene. Newcomer Scolapasta, from New Jersey-born Denise Silvano, has already received an amazing response in just a few months of being open. “All the locals are coming in and coming back two-to-three times a week, just from word of mouth,” Silvano says. She and her working partner Rosario say they selected the area because it had that, “lovely walking feeling.” Silvano adds, “No words can explain the feeling that I got when I first saw this little neighborhood.” She compares what she calls the area’s ‘rebirth” to Manhattan’s Meatpacking District or the lively downtown of Montclair, New Jersey. Set on buying a building rather than becoming a tenant, Silvano found her best luck by hitting the town, as if time was turned back 50 years. “I got a facial and was told to go to Mr. Black, the attorney down the street. He told me to go see Mr. Fox, the local broker. It was like straight out of a movie!”

Surprisingly, many of the neighborhood’s businesses (Fishtail, Blue Jean Blues, Sandra Topel’s Wellness Spa and more) are owned my women. “It’s a very homey place,” Silvano says. “Everyone watches over everybody’s business, and we all support one another.” ?