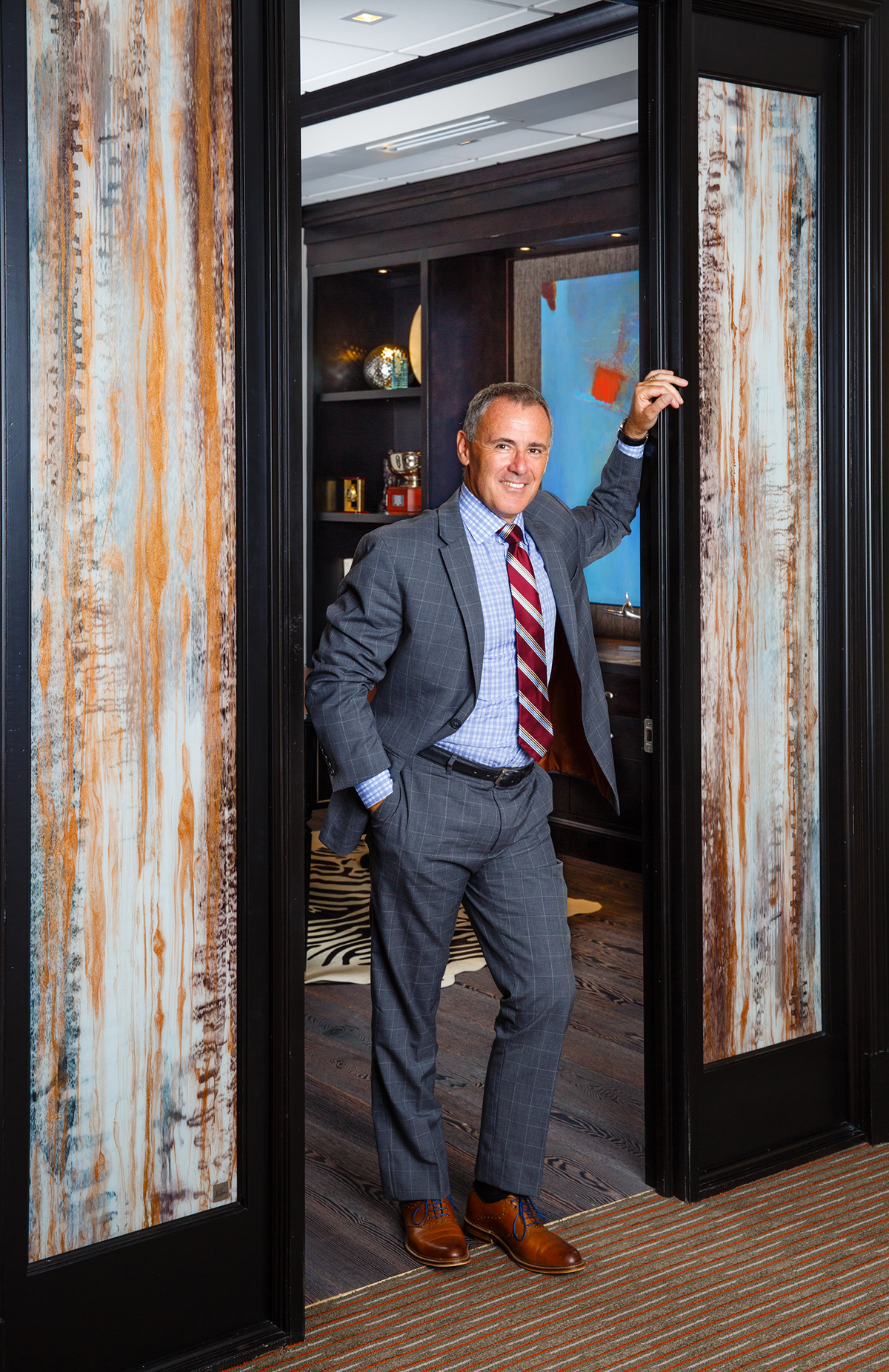 Broken Sound’s GM has a drive to be green

With their vast swaths of grass, country clubs are sometimes portrayed as monoculture biological deserts. That’s not the case at Broken Sound Club.

In the middle of talking with a visitor, General Manager and COO John Crean goes behind his desk and grabs two jars of honey with the Broken Sound logo. One of his many quests to make the club ecologically friendly was planting wildflowers and installing 22 beehives. It’s a critical environmental move as scientists worry about the collapse of bee colonies. The hives have about 1 million bees and produce more than 1,000 pounds of honey a year, which is given to club members.

Crean and Broken Sound’s environmental approach offers a case study in how to build a brand to differentiate yourself from the competition. The competition is fierce in country clubs, Crean says. He thought about how to brand the club when every club offers similar food and service—although he’s quick to add his club provides that at higher levels. The answer was to position the club as an environmental leader among gated communities.

Broken Sound, which has two 18-hole courses and a residential development, is certified as an Audubon sanctuary and was the second club in the United States to become certified by the Scotland-based Golf Environment Organization. The club has a composter/digester that turns plant clippings and food waste into compost that has the qualities of organic fertilizer.

While golf greens are sometimes criticized for soaking up a lot of water, Broken Sound uses reclaimed water from the city of Boca Raton. It also uses solar power and recycles cardboard and plastic bottles.

Crean said his appreciation for the environment goes back to his family’s farms in his native Ireland. He became irritated when he saw foam cups being blown onto the courses at Broken Sound. He doesn’t give up easily in his quest. When the corn-plastic cups used to replace the foam cups sweated and got on members’ clothes, he added insulating koozies to golf carts.

The food and plant digestor is hailed as the first industrial compost program in Florida. It can hold 47 cubic yards of material. Microbes generate heat and breakdown the cellulose—“and out pops seven cubic yards of compost on a daily basis,” Crean says. Environmentally friendly, yes, but it also reduces the need for fertilizers and mulch, which saves money.

The previous renovation of the spa and fitness center was built to standards for Leadership in Energy and Environmental Design, a program by the U.S. Green Building Council, which resulted in recognition from the city. The Environmental Protection Agency asked Crean to be a speaker at a conference in San Diego.

A few years ago, Crean saw concerns about the Zika virus. “What’s the natural killer of the mosquito? Bats. The Florida bat has been declining. Let’s see if we can create habitats for bats,” he says. The club put up 12 bat houses, and four of them are now populated.

Crean gained major recognition in 2005 when he was awarded the “2005 Club Manager of the Year” award by Club Management magazine as well as the “Excellence in Club Management in 2005” award by the McMahon Group, a private club consulting firm.

While some gated communities are struggling in South Florida, Broken Sound appears to have a robust model.

The Club Course, which is part of the residential development on the west side of Military Trail on Yamato Road, has a cap of about 435 family members and was recently at about 380. Crean plans to fill the gap.

There is a 45-person waiting list to be a member of the Old Course, which has a 350-member cap. It’s on the east side of Military.

“I don’t know when they are going to get in, because I don’t have people downgrading or selling to get out of the Old Course,” Crean says. The Old Course has been the home of the Boca Raton Championship, the PGA Tour kickoff event, since 2007.

Work on the Old Course began in 1977, according to an article in the Palm Beach Post-Times (now, simply the Post). It’s been called a Northern-style course with an abundance of live oaks and maples.

The Broken Sound name came about when golf course architect Joe Lee cleared some brush, put a ball on a tee and took a swing. The ping of the ball broke the stillness.

Arvida, the developer of the residential project, bought the Old Course because it was running out of memberships at the residential development. Lee and golfer Johnny Miller designed the new course.

The club complex has 1,623 homes and 800 apartments and 23 tennis courts. There is an array of amenities, including three restaurants, a spa, fitness center and a gym.

Crean is embarking on the third upgrade of the clubhouse during the 17 years he has been there. The earlier versions cost $18 million and $10 million. This one will cost about $29 million.

The design by Peacock + Lewis Architects and Planners will have a new entrance with a fountain, a glass-covered porte cochere and a two-story arrival pavilion.

The clubhouse will include more space for the card rooms and a bigger golf pro shop, a rooftop bar, a grill room atrium bar, a sports bar overlooking the greens, a new main dining room with a retractable floor-to-ceiling glass wall, and an outdoor terrace with a restaurant and bar. A new playground will be built behind the pool deck.

Homes at the club range from $300,000 to $4.5 million. Broken Sound draws many residents from places like New York, Chicago, Philadelphia and Washington, D.C., Crean says, but a recent trend is Miami-Dade County residents moving north.

Health, wellness and conveniences for members are other emphases at Broken Sound. Crean recalls a conversation with Boca Raton Regional Hospital CEO Jerry Fedele about six years ago about the trend for health care to become more localized. Why not have some physical therapists from the hospital at Broken Sound so members wouldn’t have to trek over to the hospital for visits? What started with one physical therapist has evolved to 2½ to three working almost full time with a nurse practitioner also on site. The club’s spa has a dietitian, too.

Crean’s impact on the club and the city were recognized in January when he was honored at Broken Sound’s 15th annual fundraiser for the Jewish Federation of South Palm Beach County. There was a video of his life, and Crean was surprised by the mayor when he was given the keys to the city. ♦

Crean was born in Roscommon, Ireland, and says he probably swung his first golf club by age 12.

His father established one of the first manufacturing businesses in western Ireland, making mosaic tiles. Crean’s father died when he was 3, and the business was taken over by an uncle, who turned it into a major enterprise.

Crean got into the hospitality field as a hotel and catering major at Galway’s regional technical college, which involved a year in Switzerland.

His brother suggested he put his name in for the U.S. visa lottery. Crean moved to the States and got his green card in 1996. He worked at The Lawrence Beach Club and The Muttontown Club on Long Island in New York.

Crean was recruited to Broken Sound by a headhunter from John Sibbald and Associates. Some members of Muttowntown liked his work and also had homes in Broken Sound. Crean says he wasn’t that eager to move to Florida, but his wife fell in love with it.

The club didn’t make a great first impression on Crean. He saw some overflowing ashtrays and cigarette butts on the ground. There were tissues on the floor of the restrooms and chairs weren’t straightened up.

“If people were missing the details, then I knew there were much larger details that were being missed,” Crean says. “These things can be fixed easily, but the problem is nobody is seeing them. If you don’t see the small things, you aren’t seeing the bigger things.”

Crean said he fixed the details and then went after the bigger structural problems, such as the level of food and service. For example, he didn’t like the concept of overtaxed waiters working just for tips and handling too many tables.

Cearn acknowledges he has a big job with lots of employees and responsibility for the brand.