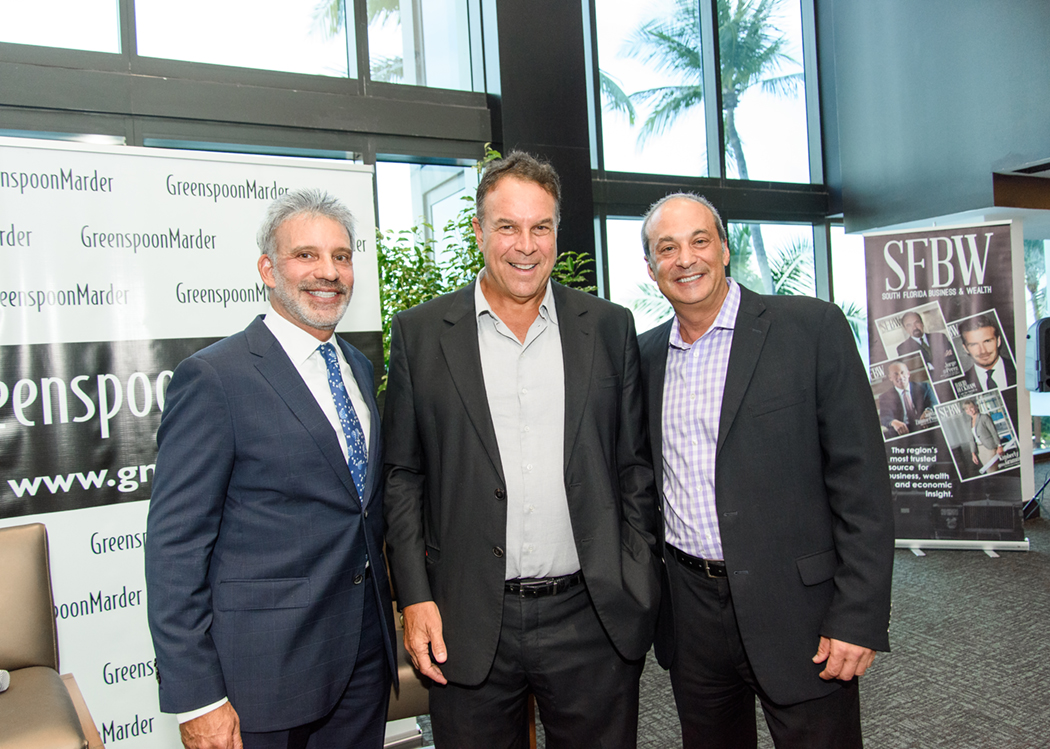 Real estate investor Jeff Greene reaped $800 million by anticipating the nation’s housing collapse before the Great Recression, but these days he’s a developer himself.

He is poised to build a two-tower, 30-story, mixed-use complex in downtown West Palm Beach and has dozens of other acres in a city. He also just opened The Greene School for pre-kindergarteners through middle schoolers.

Although Forbes estimates Greene’s net worth at $3.3 billion, he comes from a blue-collar background. He worked his way through Johns Hopkins University, including winter vacations as a busboy and waiter at The Breakers in Palm Beach, and earned a bachelor’s degree in 2½ years.

After accumulating a nest egg as a circus promoter, he went back to school at Harvard University and earned an MBA. He also bought a three-family home that started his investments in residential real estate.

He survived a roller coaster property market in Los Angeles to accumulate a $1 billion real estate portfolio. Then he made a bet on the collapse of subprime mortgage-backed securities. His investment has been described as the most successful trade in history by an individual investor.

SFBW Chairman and CEO Gary Press interviewed Greene was interviewed in a ballroom overlooking the ocean at the Tideline Ocean Resort and Spa, which he owns in Palm Beach. The following transcript has been edited for brevity and clarity.

Tell us a bit about your early life, including the values instilled by your parents and how you worked your way through college.

I grew up in Worcester, Massachusetts, a working-class manufacturing city. If you were rich, you had a Lincoln Continental and a two-car garage.

I think I was brought up at a time when it was really easy to have a hard work ethic and really good values.

What prompted you to buy your first residential property while you were going to Harvard, and how were you able to accumulate 18 properties while earning your MBA?

A guy at John Hopkins had bought a three-family building and said you can live rent-free—the other two units can cover your payments. I bought a three-family house for $37,000 and $7,000 down. I ended up moving in there, and the market was so undervalued, I realized this was a good investment. While I was at Harvard, I bought 18 properties. I ended up selling that first property for $185,000. The market went up 500 to 1,000 percent. I realized you usually make the most money on the big wave.

When did you move back to Florida?

In 2008. I lived in Los Angeles for 28 years after Harvard. I had ups and down in my real estate career. I had about a $1 billion real estate portfolio and $500 million in debt. During an earlier crash, my wealth had been in negative territory. In 2003, I started to get concerned: Are these prices going to hold? What if rates grow up?

I thought that there has to be some sort of hedge rather than panic and selling. I met with my bankers in New York, and John Paulson, who has a hedge fund. They had different ideas. Goldman Sachs said you could short S&Ls. Paulson said, “I’m shorting subprime mortgages and doing it with derivatives.”

I ended up shorting $1.1 billion of subprime securities in April 2006. I knew in 2008 I’d be cashing in and my profit was over $800 million, so I thought, “Florida, here I come.” I had a yacht and was only in L.A. three or four months a year. I thought I could save a couple million in taxes. My mother lives in West Palm Beach.

My wife and I moved to South Beach. I was married for the first time in 2007. We didn’t really like South Beach that much and then we came up here for Thanksgiving. We found a great house and moved here. We love it here and have no intention of going back to California.

Did you know the guys in the book and movie, “The Big Short?”

Michael Lewis, the author, contacted me early on. After I cashed in the trade, I was on cover of the Wall Street Journal and had a big thing in Forbes and on CNBC. Greg Lippman of Deutsche Bank and I were in a parallel world, but we weren’t talking to each other.

What, if anything, keeps you up at night?

I think we have a real problem in this country creating an inclusive economy. What globalization did to manufacturing jobs and the blue-collar workforce, I believe machine learning, robotics and big data will do to the white-collar workforce in the next five years—massive job destruction.

We are heading into a society where it’s going to be very hard to create good-paying, meaningful jobs. We have to reinvent capitalism. I believe that the capitalism that was so good for me will not allocate our national resources equitably.

The problem where we are today is just the evolution of our global economy. We have iPhones that do what supercomputers did 20 years ago.

Our economy has a cancer, and the cancer is the job-destroying technology and globalization. We have the best economy and universities, but a distribution problem. How do you equitably distribute all our resources?

I had lunch with someone in the technology field and he said, in five to 10 years, we may see people not owning cars—you’ll just jump on one that picks you up. I understand the argument, but cars are also status symbols. What do you see happening?

I think five years is way off. There are 1 billion cars on the road. Some friends at Harvard say there will be half a million driverless cars in five years. At some point, they will take over. All the drivers will lose their jobs and all the auto shops close. Personal injury attorneys will lose jobs.

What are your thoughts about the real estate market down here?

I just finished a 540-unit complex on the former Atlanta Braves site and rented 400 units in the first few months.

West Palm Beach didn’t have the recovery that Miami and Fort Lauderdale did. We are just getting stabilized here. There’s the Bristol condos that just started. Kolter is finishing a 15-story apartment building, and Broadstone is going up across from the train station. We are going to lag the other South Florida markets and we will have a recovery as the others decline.

It’s a much better deal to live in West Palm Beach. In a year, we will have a train that will take you to downtown Miami.

When we moved here, I had just cashed out all that money from our subprime craze. For me, having always been in real estate, it was a no-brainer to buy some of these deals at depressed prices. There were great deals, not that I just loved West Palm Beach. Over more time, I realized it was a little gem.

There’s an airport next to the city and beautiful beaches across a short little bridge. Palm Beach is a wonderful historic city with great restaurants and historic architecture.

Downtown West Palm Beach is a beautiful city. You can walk everywhere. There are great restaurants, fishing and the Kravis Center. There are two baseball teams playing here next spring, the Washington Nationals and Houston Astros, in a $150 million stadium. We’ll have the high-speed train next year and you can be in Fort Lauderdale in 35 minutes and Miami in an hour—some day, Orlando in two hours.

There are people from all over the country moving here. Anybody who has a tax event, the first thing they want to do is move to Florida.

What are you working on in West Palm Beach that you are most excited about?

One West Palm between Dixie Highway and Quadrille, just south of the north bridge. It’s two blocks from the water, and Arquitectonica has designed two amazing, 30-story buildings.

I hope to break ground in the next four to five months.

In the Northwood area, I’ve accumulated 22 acres and a half-mile of waterfront. I have some very exciting plans for mixed use there.

How did you deal with the ebbs and flows of being up several hundred million dollars and then have a negative position?

When you are doing great at a young age, you think you are Boy Wonder. In 1991, it was no buyers, all my properties crashing in value, and everyone threatening lawsuits. I spent three or four years in what was like guerilla warfare. I hadn’t been married. It was a pretty depressing time.

The lesson was, don’t get too leveraged. Real estate is a cyclical business—some are mild and some will be severe. Don’t ever assume it will be a straight ride. There will be bumps in the road and they will come when you least expect it. ↵