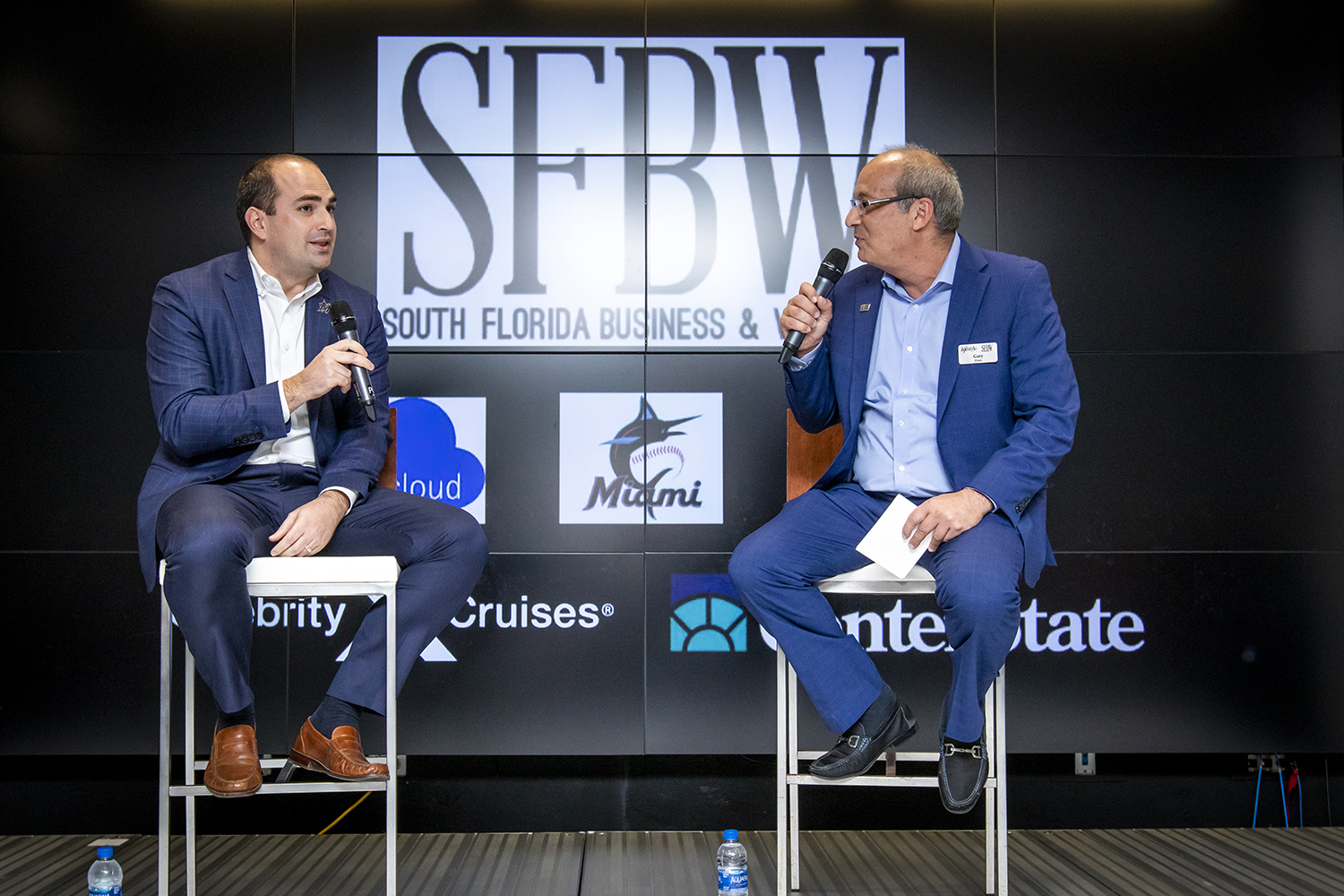 Chief revenue officer Adam Jones has a key job at the Miami Marlins, trying to renew the fan base of a franchise that has plenty of down seasons despite winning two World Series titles.

Jones’ entry into the organization was initially serving as a consultant when now CEO Derek Jeter’s group was bidding for the team in 2017. Jones saw a generational opportunity to join the Marlins executive ranks in October 2017 when the deal was finalized. He brought plenty of insight as leader of the sports practice at consulting giant PwC.

The new owners have invested $15 million in Marlins Park, which is evident in the revamped Club presented by DEX Imaging, where this edition of the “CEO Connect” feature was held.

Jones’ strategy has broader lessons for any business that is in a turnaround situation or just wants better engagement. He was interviewed by SFBW Chairman CEO Gary Press.

Here are 10 key takeaways, edited for brevity and clarity.

As the Marlins ownership group prepares for its third season, Jones talked about the start of the journey.

Year one was a lot about listening as an organization. We need to build trust in the marketplace and understand the Marlins complicated history. 2019 was about investing and moving forward. Those investments started with our brand and the launch of the new look and feel of the Marlins, a brand that we’re very proud of. That was informed by the market and our fans as to what was authentically Miami. We then turn to $15 million of capital investment into this ballpark—the first private dollars that have gone into this beautiful community asset. We were looking to reimagine what a ballpark experience is. We certainly want baseball fans and the advocates here cheering on the Marlins, but what we’re seeking to create is a much broader entertainment experience. That’s going to allow us to address more of South Florida, and really allow us to take this to a scalable level so that we’re sustainably investing into the baseball season.

Jones was asked whether the Marlins might be under a more powerful microscope than the Heat or the Dolphins, who might get more of a pass if they don’t put the best team out there.

I’m happy to be under that type of scrutiny. Baseball is South Florida. If people are leaning in and paying attention, that’s good for us and we have set a very aggressive standard for what this organization will be. We are making promises that we intend to keep. I think there is no one that is more of a critic than we are of ourselves, as to where we are and how quickly we want to take this, which is building a business that sustainably can invest within the baseball side, which has made tremendous strides going from worse to among the first in terms of talent within our system.

More than a ballpark

Rock ’n’ roll fan Press said he thought South Florida always had the reputation of really not having the right venues for arts and the cultural scene, but there seems it has a lot of different venues now. How does Marlins Park fit in?

There was a view in the organization that this was a baseball venue for 81 dates of Marlins baseball. We said this is a world-class sports and entertainment venue. It takes time for us to build toward that type of standing, but we’ve been well down that road to this point. We believe that there are artists that have played larger venues that will start to play in this size venue. But we also think that there are festivals and other formats of live entertainment, too. There are family shows, there are assembly events, there are conventions. For those who had a chance to step out toward the field, you saw one of those events that we’re bringing to life this weekend [in November]—hosting the FIU/UM football game.

Press talked about working in Baltimore and Camden Yards being walkable from downtown. Is Marlins Park’s location a challenge?

There are downtown facilities, and there are facilities that are located more in suburban locations. We’re very fortunate and we embrace our location here in Little Havana. What that represents in terms of an identity is for us to embody what that means to the broader South Florida. We know the vision, the promise of this ballpark was in part to serve as a catalyst for economic impact, which we’re addressing both in terms of Marlins events and non-Marlins. events, but also the continued growth and development of the neighborhood. There will be a role for the Marlins to play within that further evolution of Little Havana.

Take me out to the ball game—earlier

Jones was asked about some earlier start times in the upcoming season.

During the week in the early and later parts of the season, we’ll be starting not at 7:10 p.m., which has been the start time since the park opened, but at 6:40 p.m. For professionals leaving the office, the earlier start time hopefully allows people to come straight from work. For families, the earlier start time when kids are still in school gets them home earlier. It makes that decision a little bit easier as it does for fans to the north. Hopefully we’re getting them home closer to 10.

Marlins CEO Jeter is a five-time World Series champion with the New York Yankees and one of the top players in Major League Baseball history.

Working with Derek is an incredible opportunity. He’s someone who has a vision for what this organization will be, which is world-class standards for how we’re going to operate and engage with the community. He has incredible intuition as to how he’s approaching not only the baseball side, but the business side of the organization. He’s someone who listens intently, never forgets anything that, you know, is said throughout our conversations. He is very thoughtful with his questions and where he chooses to apply that intuition. But it’s something we have very fortunately across our entire investor group, who share a vision for what the future of the organization is. Everyone is in this for the long term.

Jones is married with two girls, ages 5 and 8. He was asked how he finds work-life balance

I think you find that balance is not a constant. You’re sort of always on that pendulum swinging back and forth. I came from a career that involved a lot of travel, involved a lot of the same hours that we find ourselves committing to today. I’m fortunate now that I generally find myself here in Miami and am able to go home at night. It requires having a supportive spouse and understanding spouse and understanding kids. As they get older that only becomes more voices to that conversation. There are very unique things that come with being involved with the sport organization. Where we can find those moments to create that unique access, unique experience for our families, we try to do so. But I won’t sugarcoat it to say that the balance is there the majority of the time. We’re doing something incredibly hard and it involves an incredible amount of investment of time for us to deliver

Jones talked about how the team did a price reset after listening to fans.

Prior to 2019, we had our ownership invest in the overall cost of attendance through food and beverage with the “305” menu, which is a $3 hot dog and $5 beer. We’re investing in parking rates going into 2020. The market was saying we were disjointed. There’s a $12 ticket, there’s a $3 hot dog, but it’s $25 to park. We’ve reset that coming into 2020 and to make sure that that is a consistent message across all of those transactions here at the ballpark. [MLB.com says the Marlins will have advance parking for as little as $15 for weekday games and $20 on weekends.] We want to take costs off the table as an objection.

About those empty seats

The team looked at why people weren’t coming to games.

For us, it’s not fighting for shared wallet, we need to vie for share of calendar, which is the most-valued asset that businesses and residents have. And that’s what we’ve done through the rest of our investments in terms of enhancements to the experience, creating products that speak to broader segments of the market. We saw marked improvement and satisfaction from those existing fans, marked improvement from our members who saw a reimagined member program, new benefits, new incentives, more flexibility, more personalization. We also find ourselves is going out to the rest of the market and understanding, “Why aren’t you here?” What we found is a market that that generally was positive. And if not positive, they were neutral. So, for us, that’s a tremendous opportunity to go out and win a much broader share of this market. We generally found a lack of awareness around a lot of what we’ve done on the investment side.

New fun for fans and families

Associate publisher Clayton Idle asked what might entice businesses to bring clients, prospects and vendors—plus himself and his three children under five.

I will start on the premium side. I believe you have a chance to experience at least a look at The Club presented by Dex Imaging. The anchor of baseball premium is the best seats in the house and those seats are located right behind home plate. We made a $3 million investment into that space coming into 2019 to reimagine the look and feel to be authentically Miami. We worked with a local design firm to overhaul that space. We focused on the food and beverage experience. We want to create a more social communal experience within the ballpark. We have people up moving around and socializing, before they make their way out to the seats. Where previously all the food and beverage was generally back in the Club, now we brought that in enhanced form out into the seats themselves. In the left centerfield area, we addressed another gap, with a more premium group hospitality space—the AutoNation Alley Deck, which is a premium hospitality opportunity for groups up to 175 to come out enjoy a baseball game from a very, very unique perspective looking back at the field.

For families, Billy’s Kids Club and Billy’s BoatHouse were two very early additions to the program. We’ve created different destinations where you can take the family, get up, move around and let the kids get some exercise before you go take in some additional innings. Family four packs and four tickets for $84, which were only available on Sundays, are now any day of the week. On Sundays, fun days, trom the time the gates open, until everyone leaves, it’s face-painting and other activities before the game. And then after the game, kids have the opportunity with UHealth to run the bases. We want to continue to allow people to build memories here with the Marlins.♦