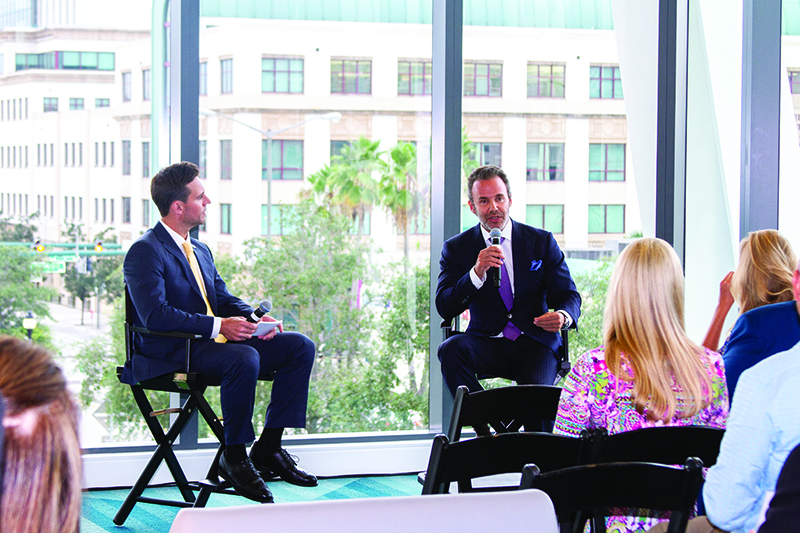 Since 2013, Jay Parker has been the CEO of Douglas Elliman’s Florida brokerage, which has 18 offices and more than 1,000 agents. The brokerage marked a banner year in 2017 with $3.6 billion in closed transactions. It ranks as the No. 1 brokerage in total sales volume in Miami Beach, Wellington and Palm Beach County.

Earlier in his career, he handled more than $300 million in mergers and acquisitions at the law firm of Gunster Yoakley. As general counsel for LandTel Communications in New York, he raised more than $375 million and restructured the company’s assets to avoid a bankruptcy filing when the industry was in distress.

In late 2001, he returned to Miami Beach to form Clear Title Group LLC. In 2006, he founded a joint venture called Titan Capital Florida, of which he is managing partner. The organization is a direct lender, with offices in New York, Connecticut and Miami.

In 2010, he formed Beloff Parker, which grew to Beloff Parker Jacobs, a real estate and transactional law firm based in Miami Beach. It represents many respected developers, landlords and tenants.

Parker recently was accepted into the Forbes Real Estate Council, an invitation-only community for executives in the real estate industry, where he shares his expert insights. He is president of the executive board of Mount Sinai Medical Center Foundation, on the board of governors for the Miami Beach Chamber of Commerce, and on the leadership board of the Miami Association of Realtors.

Tell us about your upbringing.

I grew up in Toronto. My father was a real estate lawyer. I was intrigued by real estate, and I thought I’d come to South Florida and try to do something exciting for myself. I went to the University of Miami law school. I had a great opportunity at Gunster, a very prominent law firm in South Florida. I met some great people, which led me in different direction to New York as general counsel to a telecom company. But, ultimately, I saw space in the residential real estate market, where, really, there was a lack of focus on professionalism, Realtors weren’t challenged and there wasn’t a rise of excellence in the industry.

In South Florida, every aspect of our lives, whether it’s real estate, transportation, hospitality, dining or culture, we’ve all been held to a higher standard. When I started my career 25 years ago, I could stand out by doing just a little bit more than the person was doing next to me. Today, to stand out, you really need to be revolutionary and hold yourself to a standard that exists in major metropolitan cities like Las Angeles, New York and Chicago. And we are seeing things like Brightline, and we are seeing innovators taking the next step. We are all raising the bar. We now have 22 offices and we are expanding rapidly. Florida has become a destination, and we are hitting all the markets where our clients want to be in.

We’ve had a strong real estate market since the end of the recession. How are things now, and where are we in the cycle?

You know I’m going to go bold and say that the notion of a cycle in real estate is a phenomenon that we need to realize isn’t going to repeat itself. There are many markets throughout the country and the world that have not experienced cyclical behavior, but instead have had extraordinary trajectories upward. My hometown, Toronto—they have had 25 years of upward momentum in sales in velocity and price. Cities like New York, while we’ve seen some blips and crashes, ultimately, the price and value continue to go up and up and up.

The notion of cyclical real estate markets in Florida is a byproduct of the boom-bust cycle we’ve experienced historically, and I think that Florida, for many, was a place for second homes, an investment destination, a place for flight capital and money laundering. It has not been a primary destination in the same context of that is today.

I hate to say negative things, but I remember when I started practicing law that Florida was called a sunny place for shady people. It is very far from that today.

Today, the Sunshine State is a place for tax refugees, a notion that didn’t exist a year ago. Today, world-renowned architects, award-winning designers and world-class financiers are coming to Florida to put their products here. At Douglas Elliman, we are fortunate to represent Pritzker Award-winning architects, like Jean Nouvel and Renzo Piano.

We host probably the most significant art festival in the world, Art Basel Miami Beach, which I think was a catalyst to this significant change in our markets, drawing an international, discerning crowd that has bled slowly and effectively north and is now starting to permeate the west coast of Florida, complemented by tax reform.

So where are we? We’re in a stable market as opposed to where we were in the past.

Today, we have high net worth people from California, New York, Connecticut, Canada coming to buy permanent residences. Why? The age of our population. First off, you have the baby boomers—now, they aren’t coming here to live by a shuffleboard court or in a golf course community. Now, they want “lifestyle,” because our community sense has evolved where we want to live closer to culture and be able to walk. So, the age of our population and tax reform have created a surge in our market, which have directed us away from a cyclical market and into a market, I think, that has sustainable growth for the foreseeable future.

Luxury is the hottest part of the market. The $500,000 to $2 million sector has been strong the past five years. We can expect that to remain strong. That could be in part that so much of the new development today is luxury driven. Palm Beach has seen quarter after quarter of increasing strength and volume. We are seeing more units coming on the market, and prices are increasing quarter after quarter, and [the number of] days that inventory is on the market is starting to drop in most of our markets. Overall, we are seeing strength throughout South Florida.

What’s not moving with the same velocity is the low end. There is so much demand for the middle market, that there’s not as much excitement around the low end of the market. I think it’s in a lull, but not in a dangerous place. It’s just not experiencing the same spotlight that the other sectors of the market are experiencing.

Within Florida, which areas are you most bullish on?

West Palm Beach. Boca Raton. Fort Lauderdale. Delray. Tampa. St. Pete. Naples. There’s no question about it that the market has evolved in Broward and Palm Beach counties. We are selling the Four Seasons in Fort Lauderdale at $2,000 a foot, which was almost unheard of in Miami five years ago. Fort Lauderdale didn’t have a product meeting that price point.

Two studies that hit the news in April suggested that sea level rise was starting to influence the prices of homes at lower elevations. Are you seeing evidence of that?

No, I’m not seeing evidence of it affecting price. It’s definitely an issue. It would be foolish for anyone to deny that sea level rise is a concern—or a reality. But it’s not unique to us; it is affecting us globally. We don’t yet have any concrete solutions, but if we put a man on the moon, then we can find a solution and we are working on it.

I really enjoy seeing industries evolve. I believe in helping people. I was motivated in the title industry because I thought what was out there was really weak and focused on serving the client. When Howard Lorber, my mentor and chairman, approached me about Douglas Elliman, I thought he was brilliant in recognizing the connectivity that exists in our nation—the fact that people in New York naturally move to Florida, that people from California naturally buy places in Colorado, and that people from New Jersey buy places in New York and in the Hamptons. And there was an opportunity to coddle that business and build relationships.

I saw that and believed that, so I left my business and really took a big risk and came in and saw all these Realtors that joined me. I really thought there was a chance to evolve the business and provide a more professional discipline for an industry that is fragmented. It’s not that the people aren’t professional, it’s the structure with all these small brokerage firms all over the place that created a void, leaving 50,000 Realtors on their own to define what’s professional and what they should be doing.

Should I make cold calls? Should I be doing research? Should I host an open house? By employing a level of unprecedented professionalism, I think Douglas Ellman really raises the standard for the industry. And, of course, providing for my beautiful family motivates me. ♦

The evening begins with a cocktail reception for about 100 guests followed by the highlight of the event, a live interview conducted by SFBW Chairman and CEO Gary Press or SFBW Associate Publisher Clayton Idle and a well-known C-level executive who provides insight into their personal lives, careers and views on issues affecting the business community.