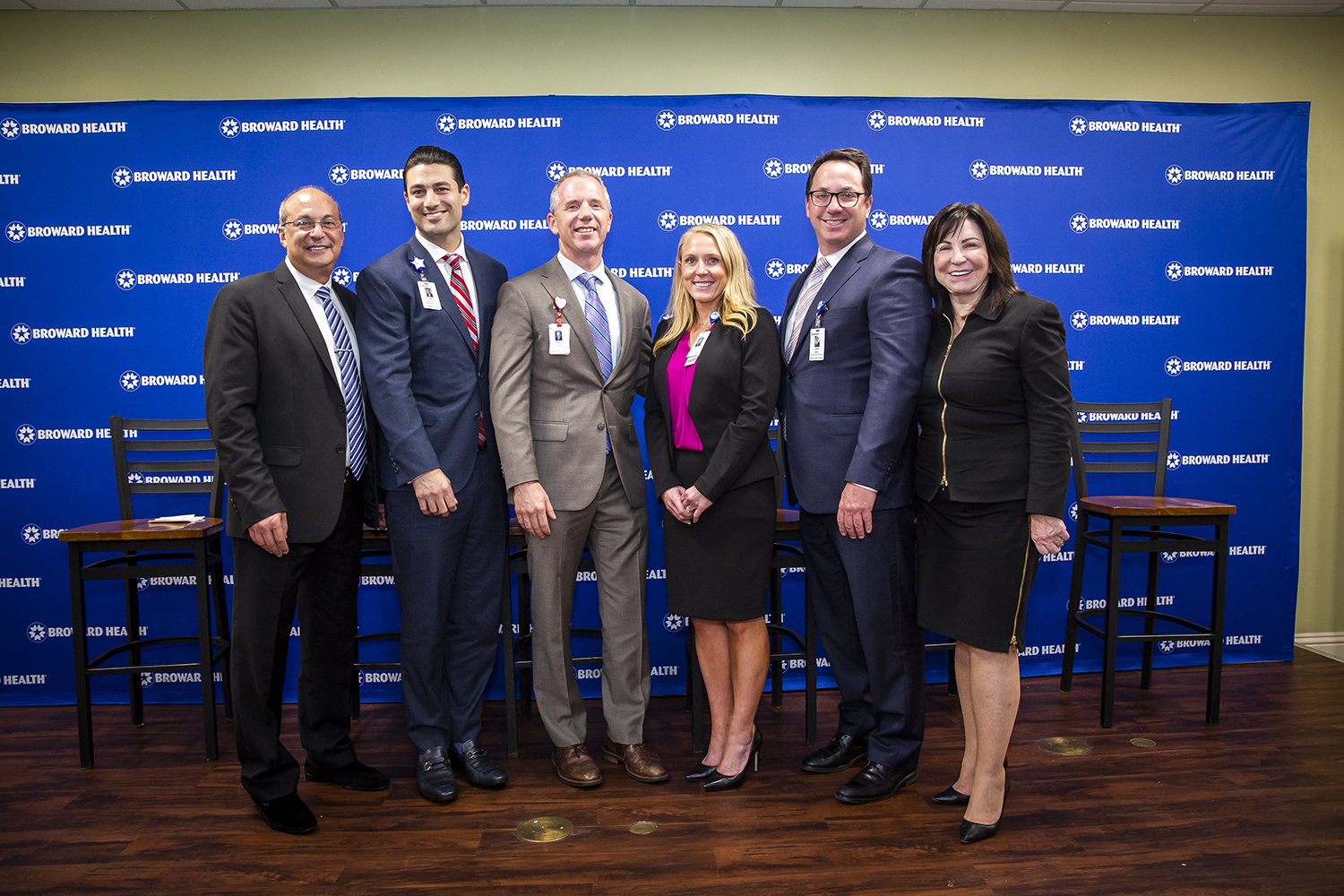 This edition of “CEO Connect” features the CEO of Broward Health and four of its hospital CEOs.

Broward Health is one of the nation’s largest public health care systems with a $1.2 billion operational budget, 1,584 beds, 56,351 admissions a year, 276,790 emergency department visits annually and more than 8,000 employees.

• Gino R. Santorio, the president and CEO of Broward Health, was promoted from chief operating officer in December 2018 and has more than 15 years of health care experience. He has saved Broward Health more than $33 million in operational costs in the past year by leading the system through contract renegotiations and operational improvements.

• Registered nurse Heather Havericak is CEO of the 716-bed Broward Health Medical Center in Fort Lauderdale. Before being appointed CEO in August 2019, she was chief operating officer.

The interview was conducted by SFBW Chairman and CEO Gary Press at Broward Health Medical Center. Following are highlights edited for brevity, clarity and continuity.

What would you like to see happen with the federal and state governments in addressing health care?

Santorio: I’d like to see a little more organization in how it is administered. It’s a little bit difficult right now to get on some of the plans for Medicaid. Medicare has been a bit easier. Medicaid is a little bit more difficult. The way that it’s handled right now in terms of who is qualified for it and how it’s funded, from the federal share versus the state share, is a little bit convoluted.

Taylor: I think I would like to seek better alignment between the reimbursement and the rising costs of supplies and on drugs. They are inconsistent—one is going down and another is going up.

What would happen to the public health institutions to hospitals all over the country if Elizabeth Warren or Bernie Sanders were elected and they got to implement their Medicare for All program?

Santorio: It works in some countries. It doesn’t work in other countries. I think it’s really all about how it’s administered. Our current structure in the U.S., even though we’re a multipayer system is very different from other nations that have multipayer systems. That’s largely because of the ratio of reimbursement from the commercial payers compared to some of the federal payers. Medicare is pretty much the standard. It about covers costs. We’re not really earning profits on Medicare. Medicaid, on the other hand, in the state of Florida, we earn approximately 57 cents on every dollar of cost we spend on Medicaid, so we lose on Medicaid. The commercial insurance payers are really making up a lot of that deficit, which keeps the equilibrium. So, I think having multiple or single payer, either option really could work. It really depends on how it’s administered. Right now, I think I favor keeping it in a multipayer system.

Smith: The fact of the matter is, you probably need to head toward a more universal health care system. If you look at the health care spends, it’s roughly $4 trillion, and it’s expected to go up in the next five years, hitting $7 trillion. So, to be able to make those types of changes and have a single payer system is quite unlikely and probably not very realistic—to be able to change the entire industry in that fashion and to get through all the politics. But I do believe that we need to get toward universal health care, we should have equal access.

Let’s talk about the mission of Broward Health, which is the last resort for uninsured patients.

Santorio: So, this aligns with what differentiates us as a health system. We treat everyone with the highest level of care regardless of their ability to pay. We don’t have the option, nor would we turn away someone just because they can’t pay. That’s both on an elective basis as well as inpatient. We provide about $335 million a year in community benefit that’s nonreimbursable. So, that’s really the difference in why we exist, because if we weren’t here in the northern two-thirds of our county, no one would really pick up that slack.

Havericak: We are also very much passionate about outreach, early detection, wellness. We do realize that many of the populations we serve in the community still continue to have disparate outcomes. We know that a large percentage of our African American population, our Hispanic populations are continuing to have different health care outcomes. It’s really important that we reach some of those communities exactly where they are and provide that education outreach and screening.

Smith: I’ve personally worked at for-profit and a number of nonprofit entities. Broward Health is the first one I’ve worked for a public health care, safety-net hospital system. There really is a major difference. The type of services that we provide to our community is so extensive. We truly do provide world-class care to anybody and everybody that needs it. We’re providing prenatal care to others that wouldn’t necessarily get it.

Taylor: Even as the safety-net hospital, we really invest in innovation and technology and we have that available for all the patients we serve.

You inherited a mess. I’m not go into all the details, but some bad leadership, some bad deals and you’ve turned this around tremendously in your short tenure. Where do you see the financial health today?

Santorio: Financially, we’re actually A-rated from a bond standpoint. We have over 230 days of cash on hand. That’s why we’ve been able to continue reducing the millage rate and the tax burden. Financially, we’re very strong. Our outlook from a growth perspective is I think, very favorable in the next five to 10 years.

Where do you see the greatest challenges for 2020 and beyond?

Smith: The system is really starting to see significant growth. We’re headed in the right direction, and we need to redesign our facilities to meet the outpatient needs, and to transform our services as health care is ever-changing. At the same time, we also need to outfit our medical office buildings for primary and specialty care and provide more services closer to the community. At Coral Springs, for example, we just expanded with a new tower, a $65-million expansion.

Havericak: We’ve invested a significant amount of money in our graduate medical education because we see that we’re going to have a shortage of physicians in every specialty. We have a statutory teaching hospital here with a variety of fellowships and residencies, and we’re going to expand that academic footprint throughout the whole health system. We’ve also looked from the human capital perspective at nursing residencies, tech residencies, so really engaging all of those different methods to support the future of health care.

What are some of the cutting-edge treatments these days?

Havericak: We are the first in Broward County to offer robotic surgery for our head and neck cancer patients. We have been able to onboard a world-class expert from Johns Hopkins [physician Ryan Sobel], who has relocated down here. Patients with head and neck cancer historically have had very disfiguring surgeries that limit their ability to eat, to drink and to talk normally. So, this is really a revolutionary treatment.

Taylor: We have a Mako, a robotic piece of equipment that assists the surgeons in orthopedic surgery. If you had a hip or knee done 10 years ago, you probably were in the hospital at least five days and then there was another five days to rehab. We actually can discharge the patient with a hip replacement in a little bit more than 24 hours and with a knee replacement in about two days. It’s so precise, and it’s minimally invasive. We recently invested in a $1.7 million 3D magnetic resonance imagine system. It’s quicker so the patients not in a confined area for a long period of time, and the imaging is so precise that it’s easier to make the diagnosis.

Smith: We have six different specialties using the Da Vinci robots. We’ve seen our volume basically double year over year, and we’re covering everything from general surgery to geriatrics, GYN surgery, GYN oncology surgery and urogynecology. We also have a similar orthopedic device made by Zimmer that helps with precision. I’m excited about the interventional cardiology lab at Coral Springs, which is really going to transform the entire medical center and the services we provide the community. Right now, we transfer out to our sister hospitals 25 to 30 patients per month that need more advanced care.

Gross: We have two Da Vinci XIs, which are the latest and greatest that is offered. We’re doing some unbelievable procedures. We have one of the busiest GYN oncologists in the area. You look at bariatric surgery that we are doing robotically, colorectal procedures as well.

Santorio: So how many people in the room have had pain and headaches? You all notice that you have a preference, right? What works better for you: Tylenol, Aleve, Advil or Excedrin? Everyone’s got their thing that works better for them. There’s an actual scientific reason for it and it has to do with the way your body metabolizes the drug. So, in America, about 50 percent of our prescription drugs are not necessarily the right drug. We are going to probably be the third health system in the country to launch a program—and probably the one that’s going to be the most comprehensive when we do it in June—around genetic testing of all of our patients through blood testing to test how the drugs metabolize in your body.

To give an example, for behavioral health patients, there’s all these antidepressants and anxiety drugs—30 different classes of them. It’s two weeks to wean them on it to see how it works. They have the most incredible side effects on the planet and then they wean you back down for two weeks when it doesn’t work and they can cycle five times until they get right. The new program will allow you to pick the right class of drugs before you start. Pain medicine the same thing and hypertension, too. So, you will have an individualized precision medicine when you get tested and show up at a Broward Health facility. If you need medication, in the electronic medical records, the prescribing physician will get a notification to say which class works for you.

And most important, which I talked to the Florida Agency for Health Care Administration Secretary about yesterday, is the opioid epidemic. We spend about $150 million dollars a year in the innovation fund in the state of Florida to figure out how to help patients that are addicted and succumbing to opioid addiction and dying. It’s all on the back end—it’s once you’re addicted. Out of that test, believe it or not, there is scientific proof that shows that one in five patients will have a .9 correlation, which means you’re basically almost 100 percent guaranteed to become addicted to it. What’s worse is those same patients not only become addicted, but the opioids don’t work as well for pain, which is why you have to take so much. So, this is an opportunity to actually treat the opioid crisis right here in Broward County for the first as a pilot on the front end. ♦