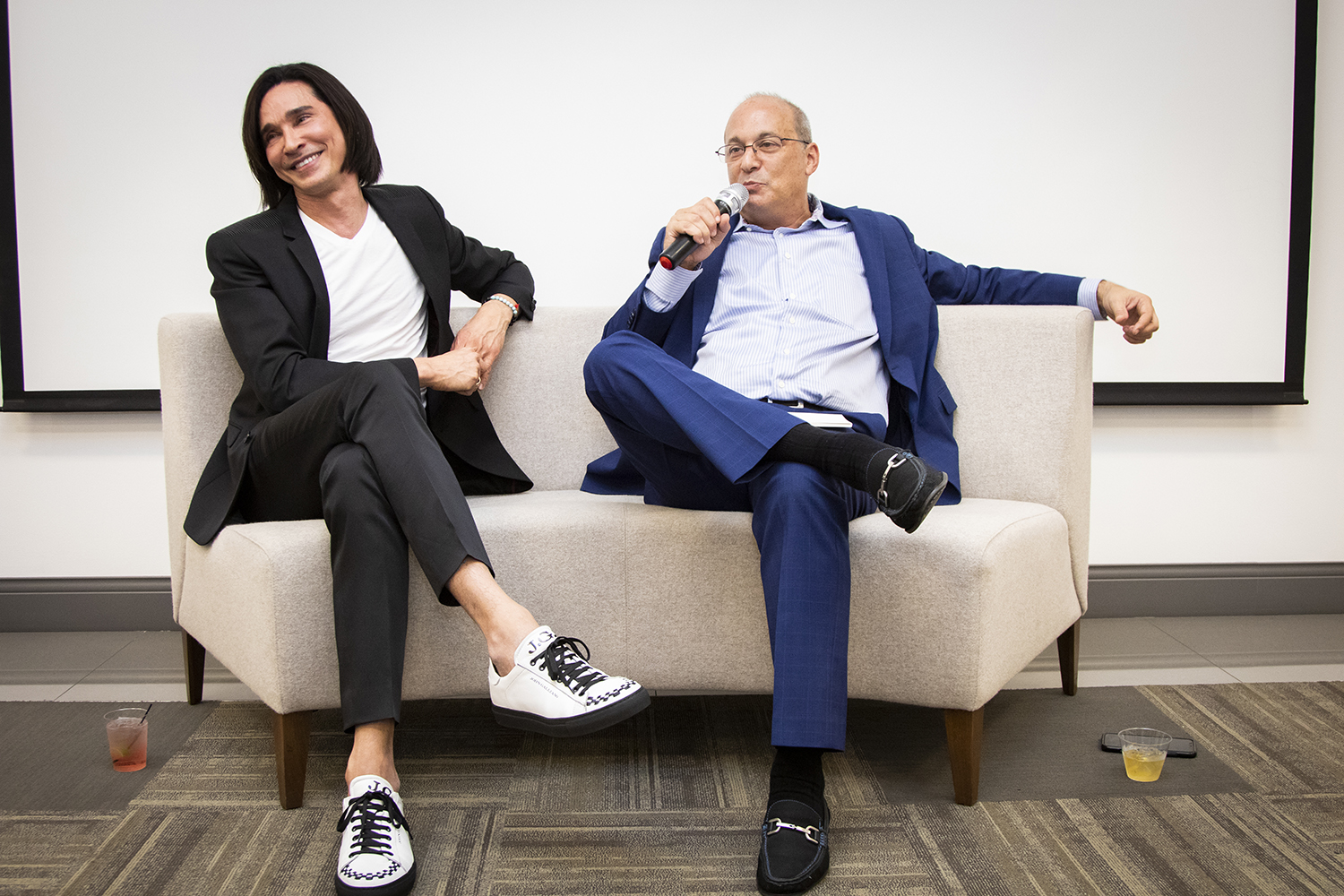 This edition of “CEO Connect” provided a lively interview with dermatologist Shino Bay Aguilera, who is world-renowned in the field of aesthetics with Shino Bay Cosmetic Dermatology and Laser Institute on Las Olas Boulevard in downtown Fort Lauderdale.

Aguilera is an award-winning cosmetic dermatologist, dermatologic surgeon and cosmetic laser expert, but he also brings a high degree of spirituality and personal attention to his patients. He told the audience how he overcame a childhood of abuse in Panama and found success in the United States.

Aguilera has a fellowship from the American College of Osteopathic Dermatology. He is a top-requested speaker among noninvasive cosmetic dermatologsts and has pioneered new practices.

He has over 17 years of advanced training in lasers and aesthetic medicine. He is a clinical researcher and a published author of medical literature, and he has worked with several medical schools.

Here are highlights from Aguilera’s interview by SFBW Chairman and CEO Gary Press. They have been edited for clarity, continuity and brevity.

We did an article in our Lifestyle magazines earlier this year in the April issue, and you were incredibly open with Editor Kevin Kaminski. You chatted about what it was like growing up in Panama and some of the things you went through. You had a very tough childhood.

So, the article was supposed to be talking about my success in my career and being successful within three years of being open. I was doing as good or better than many practices for 25 years. The article for me was a gift, because I always have lived my life with this imposter syndrome [feelings of inadequacy despite success]. It was an amazing article about my life and it really, really freed me from my demons and my past.

I grew up very, very poor. It wasn’t enough being poor, but I was raised by a prostitute [his grandmother]. So that actually marked me for the rest of my life. I would get into fights, because everybody would bring that up to me, if anybody wanted to hurt me. Now, I’m actually proud of my grandmother, because any of you who work 9 to 5 and when you complain, imagine sleeping with dirty, ugly nasty looking men every night, just so you can raise eight children. She was a foreigner in Costa Rica. My grandfather was from China and my grandfather left her with eight kids. So, she raised all of them until they at least finished school, and three of the grandchildren, me being the youngest of them.

My mom was about 17 and my dad was 18, 19, and they were kids having kids. My dad had an opportunity to go to the United States to be a jockey and my mom remarried. My grandma raised me, but she was never home at night. So, when you are a child and no one is home at night, then bad things can happen and that’s what happened to me. I was sexually abused by relatives, by the neighbors, the neighbors’ friends. I didn’t know that anything was wrong with that. Actually, that was the only time I really got affection. And to be honest with you, I enjoyed it. I did. It felt great, but then I did my first communion. Nothing like being raised Catholic, and that’s when things messed me up. It shows you that sometimes it’s not what happens to you, it’s how you’ve been conditioned to react or respond to things. So, immediately, I reacted to thinking it was my fault because most of the time when you’re a victim of molestation you always blame yourself. When I was 9 years old, I tried to commit suicide. I thought it was something about me that many people wanted to do that to me.

I always got this inner voice that guides me, and it’s the same inner voice that I hear now when I meditate. I realized that I didn’t have to kill myself. I didn’t have to be in the situation. So, I moved away from my grandma’s house when I was around age 10. I tried all the relatives and friends. I would sleep on the floor. I was afraid of the rodents and the cockroaches. I literally would sleep with my nose just sticking out, because I was afraid of the cockroaches. To this day, if you’re gonna kill me, show me a cockroach.

But I was able to conquer that and the universe tells me that in order for me to survive this, I have to forgive everybody. But, truly, most people that forgive are just saying that word. You really know when you forgive, because when you see the faces of these people or you hear their names, you don’t get a visceral response anymore. I really forgive them, truly forgive them, so they don’t have any power over me. When you forgive, you don’t do it for them, you do it for yourself.

If somebody asked me if I could go back in time and have a wish and have a better childhood with my parents raising me, I say no, I don’t want that. I want that childhood, because it made me who I am now. It made me be compassionate. It helped me understand other people. It made me meet the people in my life right now. So, for me to wish that I had a different childhood is to wish other people away.

As a child, on top of everything that happened to me, I was a very sick child. I have asthma and many, many times, I was on the verge of dying because we had to take the bus. We had to wait for the bus and there were times I barely got to the hospital and they always got gave me adrenaline and oxygen.

I also got carbuncles, which is a fancy term for boils, all over my body, from having poor hygiene. When you grow up poor, your hygiene or the water you use is not the greatest, so I would get hospitalized. I always wanted to be a doctor because of the way they made me feel whenever I got sick. So, I knew since I was 5 years old, I was going to be a physician always and I worked really hard.

I knew I wanted to come to the United States. One of the reasons is my grandmother lived behind a bookstore and they would dispose of journals. I think it was JAMA [Journal of the American Medical Association]. I loved them because it has tons of great articles about disease, tons of great pictures about diseases and tons and tons of pictures of naked people. I would read in a lot of the journals about UCLA [he thought it was pronounced ook-lah]. I told myself, I was going to go to United States and go to UCLA, which I did as [an] undergrad.

You’ve done well financially, but that’s not a motivator for you.

A lot of people say, “You’re crazy, Shino, for saying that,” but I have to be honest. I’m 51 now. I never looked at my checking account, my saving accounts. I don’t know how much money I have. I don’t care. I have people now in place to help me with retirement. I have to be responsible, but I am not leaving a huge inheritance. I work really hard for my money and my children need to be able to do that for themselves.

I want to be able to see with my own eyes what I can do with my money now. The people that hurt me were my family, the people that made me are the people that trusted me. That’s why I’m so big behind Handy [a charity that helps homeless youths and foster children] and Jack and Jill Children’s Center [a provider of early childhood education], because people believed in my dream and pushed me. They became my codreamers. That’s why, for me, money is not my motivation. My motivation is seeing my patients being happy. If they are happy, I’m extremely happy.

What are some of the latest types of treatments in your practice and, you know, with the latest things are going on, and what do you see coming up in the future?

There’s a lot of things that exist. I speak internationally. So, a lot of things that come to the United States and you go, “Whoo, novelty,” has already been somewhere else for 10 years. The good thing is the FDA happens to be very, very safe in the United States, but sometimes that could be also too strict if we don’t get out this drug that is overseas and that’s actually doing wonders for people in terms of antiaging.

When you were seeing new patients, and somebody came in and they said, “I want this done,” and you knew it just wasn’t the right thing, how did you handle that?

Some patients are unreasonable. Some vanity is good. If wasn’t for vanity, none of you would have brushed your teeth today, combed your hair and taken a shower. People that are dealing with healthy doses of vanity as they age have less disease and they are happy because they look better. Some patients have body dysmorphia [anxiety about flaws that others may not even notice] and you’re never going to make them happy. They don’t see what you see. Unfortunately, people with body dysmorphia usually tend to be the most beautiful, but they cannot see that. So, if there is body dysmorphia, it’s hard to treat them. Most gracefully, I will have to let them go. They need more help than I can do. ♦