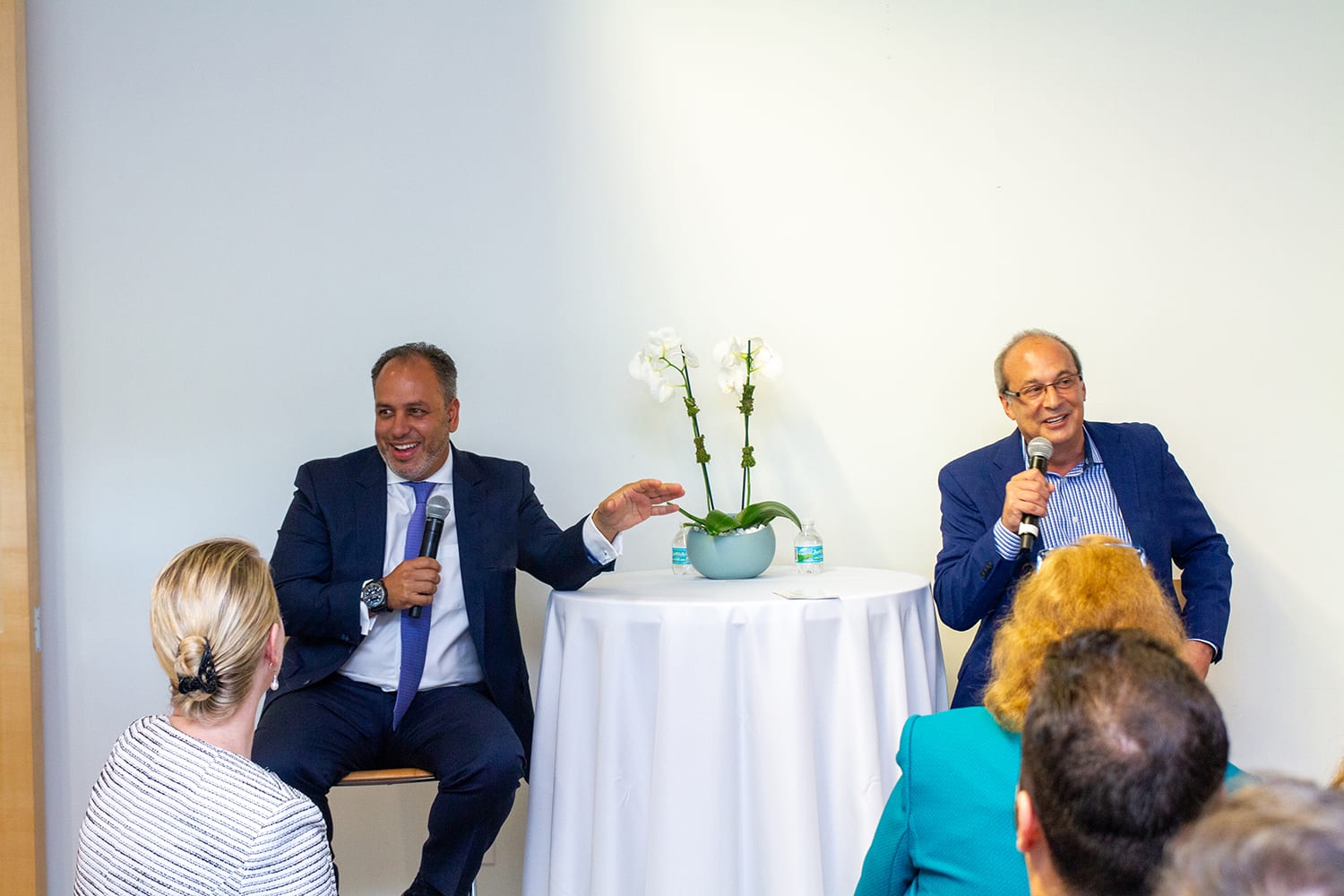 Insights into the future of health care

Barsoum is the principal investigator for a variety of clinical, basic science and translational studies and has more than 40 granted or pending U.S. patents. He has more than 200 peer-reviewed publications and is an international speaker on the topics of lower-extremity joint replacement and health care reform.

He obtained his medical degree from the Ohio State University, followed by orthopedic surgery residency training at the Cleveland Clinic and a fellowship in adult reconstructive surgery at the New England Baptist Hospital.

Barsoum was interviewed at the Braathen Neurological Center at the Weston campus by SFBW Chairman and CEO Gary Press. The following transcript has been edited for brevity and clarity.

What led you to medicine?

I was born in Jordan and my father was a physician trained in Egypt. We moved to Georgia before I was born. My dad had an internship at the University of Oklahoma and then went to the Cleveland Clinic, where he did his anesthesia residency.

I remember, as a kid we had one car, so my mom would drive him to work and we’d go back the next night to pick him up. It was that same door that he went in and out of. Years later as a resident, I actually went back and forth through that door as an orthopedic surgery resident, which was awesome. Seeing how much passion he brought to the job was just really motivating for me. For me, medicine was a great way to serve society and to do great things for other people.

What do you think the nation should do to improve health care?

As [President] Donald Trump said, that’s a really hard problem. The United States today is about an $20 trillion gross domestic product country, which is incredible. The challenge we have is, we spend close to $4 trillion on health care, which is too much. We’re really, really good at complex care. If you’re looking at certain quality indicators, like infant mortality, generalized wellness, reducing the administrative burden in the health care system, we don’t do so well.

If you look at the 10 wealthiest countries in the world, and how much they spend on health care, we spend on average, at least twice. We score dead last on most quality indicators when we’re compared to these other nine other countries.

We have a fee-for-service, reactive health care. We wait till we get sick, and we go to the doctor, the doctor makes us better, charges us money, sends us on our way. In a preventive model, the idea is, we don’t get sick as often. We live healthier lives. We’re thinner. We’re more active. Our hypertension and our diabetes are under control. And when you live that way, even if you are genetically predisposed to high blood pressure or Type 2 [adult onset] diabetes, it comes later in life. So, you’ve lived a much longer, healthier life. And then when these diseases do come on, they’re easier to manage for a longer period of time. And by doing that, you really cut down significantly on the cost of health care.

Do you think voters are ready for some sort of “Medicaid for All” program that would guarantee health insurance for all Americans?

I, personally, believe that every person in the United States should be able to get health care and I don’t think that they should go bankrupt. Whether the solution is “Medicare for All” and .. opening state borders to allow for more competition between payers, there’s a lot of ways to get there. There are some things that the federal government in health care actually does pretty well, including having a fairly low administrative burden. If I see a patient that needs a hip replacement, or a knee replacement, and they have Medicare or Medicaid, I can go ahead and schedule them for surgery and get it done. It’s very, very rare that that somebody is going to push back on me and say, that person shouldn’t have surgery. There’s kind of an implied trust, the federal government puts in caregivers.

The challenge, then, becomes when you don’t have that implied trust. There are immediate denials, and you’re constantly going back and forth. The Cleveland Clinic employs literally thousands of people to deal with insurance. Imagine if we could make that a more streamlined system.

Now, that being said, there are things that private payers do even better. Many private payers have plans that give you lower out-of-pocket costs, if you work with a health coach and keep your weight down or manage your diabetes tightly.

What’s the future of hospitals?

I think we’re going to see more and more hospitals concentrating on the two extremes of health care. For the critical care patients that are really, really sick and need to be in the hospital, we’re clearly going to see increasing the need for those types of beds. In fact, if you look at the hospital tower that we just built … a third of those beds were critical care beds. It used to be that when you built a hospital, maybe 10 percent of your beds were critical care beds. The other side of the of the coin, are the patients that you’re observing. Somebody comes to the emergency department and has a chest pain. You’re trying to figure out, is this a heart attack or is this the really bad moo goo gai pan that they had?

In the middle area—that used to be the primary total joint replacement and the laparoscopic cholecystectomy [gall bladder removal], the appendectomy patient—those patients are now more and more spending more time at home.

There was an acronym [CON] we were chatting about before, and you were talking about what they’re what they’re doing on the Tallahassee. What’s that about?

“Certificate of need” is the idea that to build a hospital, or to start a quaternarycare service like transplants, you have to petition the state. All of your competitors get to weigh in on whether or not you ought to be able to do it. It’s kind of a screwed-up system, I think. The competitors can actually block you from doing that, because they say, “Well, if they do that, they might take business away from us.”

Fortunately, this year, our state legislature actually voted to unwind certificate of need for hospitals, and for tertiary and coronary care services, like transplants. I think that’s a great thing. I can tell you that the cost of certificate of need for our hospital here, as we’ve tried to start, for example, a bone marrow transplant program, has been in the hundreds and hundreds of thousands of dollars. And every time we apply, we get blocked. Now that this one is going away, we’ll start a bone marrow transplant service that will also take more care of more patients here in our community, which I think is a wonderful thing.

What do you think about the governor trying to push more Canadian drugs into South Florida?

Having drugs coming in from Canada will lower the cost, but it’ll be a temporary fix, right? Eventually, it just becomes one more supplier. And you got to figure, if I’m a for-profit pharmaceutical company, I’m going to figure that out and I’m going to raise my prices for all the drugs going into Canada.

What we really need is to get our arms around lowering the cost of pharmaceuticals in the United States. And I think it requires several different things. The first is, the idea of having nonprofit pharmaceutical companies is a pretty good idea. We can also make pathways a little easier to do the FDA. The cost of bringing a new drug to market is astronomical.

And then finally, this whole idea of what’s called “evergreening,” where a drug can come to market with a single indication and after the patent is starting to run out—it’s about to become generic—you can go back to the federal government and say, “Well, hold on, what about if we add this additional indication?” Now, we can keep it as a trademark drug and not a generic, so the price stays up.

What innovations do you see that are coming to the forefront?

Let me start with some companies that we didn’t used to think about as being health care competitors that are now challenging us to think more out of the box. Think about companies like Amazon or Apple, which now gives you a watch to wear on your wrist that can measure an EKG [electrocardiogram, heart-rate monitor] and look at where you are on a given day. We used to think about all of that as big data. But the reality is it’s small data. It’s your data. It’s knowing how often you went to the gym. Knowing how often you ate at McDonald’s that week. Those are important pieces of information for your doctor if you’re truly in a wellness-focused preventive health care system.

Artificial Intelligence is already revolutionizing the way we take care of patients. Places like the Cleveland Clinic have invested heavily in personalized medicine. It’s important because, God forbid, if you’re diagnosed with breast cancer or prostate cancer, your tumor is probably genetically different than the tumor that your neighbor had. Having access to what that genetic sequence looks like and what combination of pharmaceutical drugs with or without surgery, with or without radiation, to use makes a big difference. We need artificial intelligence to help drive medical decision-making.

Finally, looking at your neighborhood stores. They didn’t use to deliver health care—CVS and Walmart. Walmart has a plan to put an MRI [magnetic resonance imaging] scanner in every store where you can get an MRI for 50 bucks. [SFBW contacted Walmart to verify the MRI plan, which was reported on EETAsia.com in 2015. Walmart officials did not respond to inquiries by deadline.] That’s competition, right?

Do you want to give us an update on the campus?

Our new tower, which … is spectacular, has been a long time coming. Our [admitted-patient] census has always been well over 100 percent, especially as we got into season. We have an 180,000-square-foot expansion with 75 new beds, which has been wonderful. Plus, there’s the 120,000 [-square-foot] … beautiful Braathen Neurological Center and our Maroone Cancer Center.

In addition, we’ve committed $750 million throughout the Treasure Coast, with the Martin Health System joining us and Cleveland Clinic Indian River joining us. So, we will continue to grow and modernize facilities and add new facilities. We just purchased about 35 acres in Wellington. We’re in the process right now of master planning what we’re going to look like on the east coast of Florida.♦