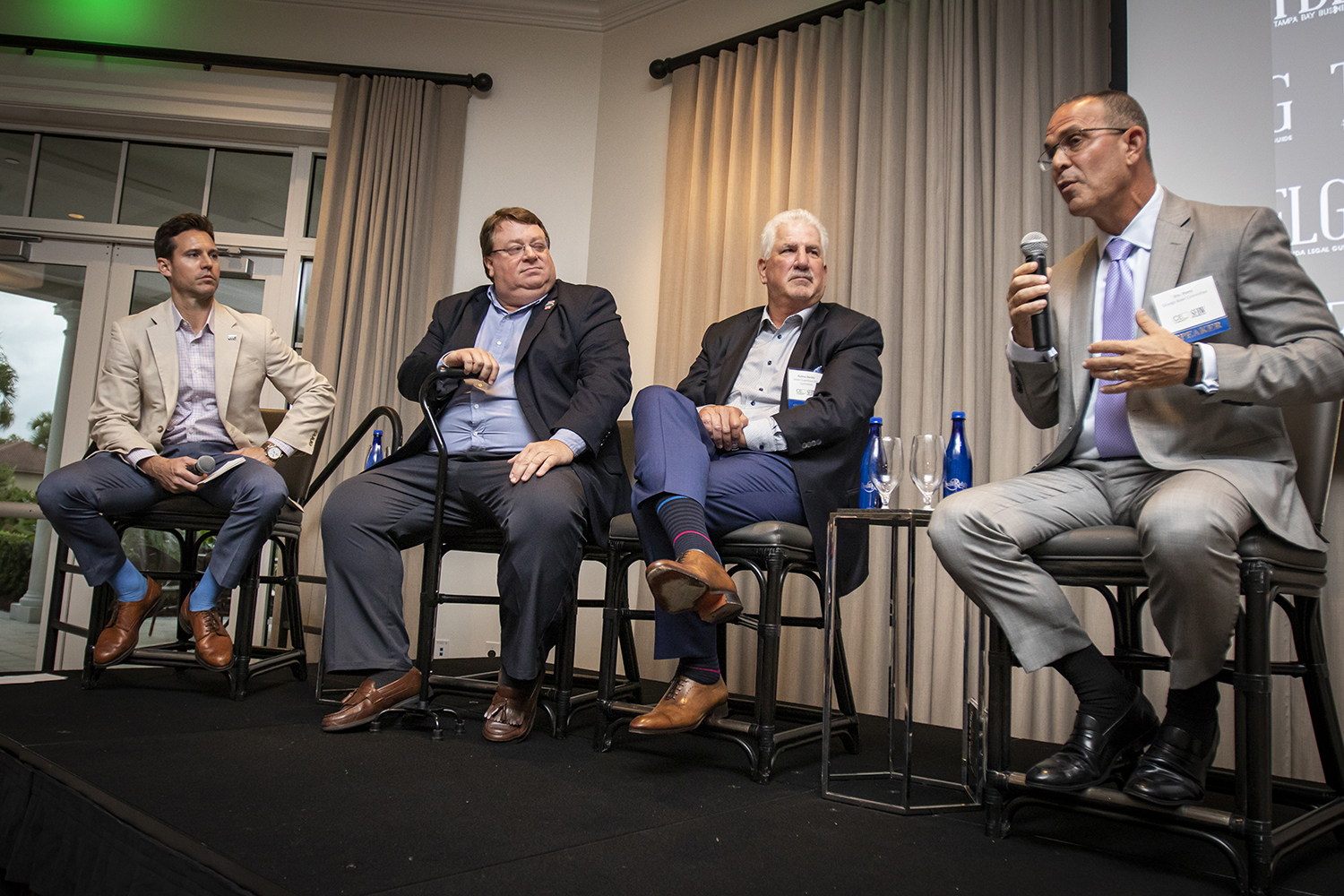 The big business of football bowls

South Florida is getting a trio of football bowl games this season, as the Super Bowl observes the 100th anniversary of the NFL at Hard Rock Stadium, the Orange Bowl celebrates 86 years and the Boca Raton Bowl marks six years.

SFBW assembled leaders of the three bowls at The Club at Quail Ridge in Boynton Beach to talk about their history and impact. They were interviewed by Associate Publisher Clayton Idle.

The following transcript has been edited for brevity and clarity

Through all the evolutions of the college bowls and playoffs over the last 25 years, how has the Orange Bowl continued to be one of the top-tier bowls?

Eric Poms, Orange Bowl Committee: I’m going to start with the Orange Bowl committee. You have 360 members of the community from Miami-Dade County to Broward and Palm Beach County. They’re standing on the shoulders of generations that built this there. But it started in 1935. The crazy thing about it is the mission statement has never changed. It’s been about economic development. And through that, they’re able to give back to the community in a meaningful way.

The Big Eight Conference was the anchor with the independents—Penn State, Miami, FSU. That changed in the last 25 years. A court decision gave rights to the institutions instead of the NCAA. The bowl coalition formed in the early 1990s, and that turned into the BCS and now the playoffs. Our leadership embraces change. We’ve been fortunate that we have always been in a Tier 1 position.

What’s the role of the Super Bowl Host Committee in landing the game and leading up to the game?

Rodney Barreto, Miami Super Bowl Host Committee: We hold the contract with the NFL and have to execute working with the governments in three counties and the cities in between. Miami is the hottest city in America. It’s the hottest city in the world. People are flying into three international airports, staying at all the hotels. There are new things since 2010 [the last time Super Bowl in Miami], such as Uber and Lyft. Past third-party economic studies say the economic impact is more than $300 million. A 30-second TV spot is $5 million. We will get north of $150 million of [publicity] for the region when all the press is here.

How did the Boca Raton Bowl come to be?

Doug Mosley, the Cheribundi Boca Raton Bowl: It came out of a relationship with FAU [Florida Atlantic University] and Conference USA, who came to us. ESPN is probably the biggest difference between how we are set up. I’m part of a group of soon-to-be 16 bowl games with the help of the conferences. I credit former FAU football coach Howard Schnellenberger for pushing for the stadium, which provides a perfect site for a bowl. We will be on the second day of bowl games on the Saturday before Christmas. We made our niche because we have such a great recruiting base down here—great student-athletes. It gives those teams an opportunity to get down here at prime time and get in front of these schools.

You are on ABC now?

Mosley: Yes, for the first time, because we’ve had so much success every year with teams in the top 25 or receiving votes. We’ve had six conference [champions] playing in games. We have won our nights, ratingswise. We loved being on ESPN, but to be on ABC, compared to last year, we will have 3.5 million households vs. 1.5 million.

Why is it important for the Orange Bowl to lead the bid to host the college football national championship game?

Poms: Well, we’re in the college football playoff era and that started five years ago. We saw change coming and we fought as hard as we could to keep the championship game within the bowl system. But it was evident that there was just too much momentum to bring it outside like the Super Bowl, like an NCAA Final Four or like a World Cup. So, the Orange Bowl committee obviously has been around and we have the decision-makers. In the Super Bowl’s world, the owners do the selecting, and, in our world, it’s the commissioners of the major conferences. So, we decided we’re going to lead the effort, got with the Miami Dolphins, Hard Rock Stadium, governments, central business districts.

I went down to Rodney, who we’ve known forever, and he’s done a lot of work for the Orange Bowl committee. He coached us up. We had to go through a couple of rounds to get it. I think South Florida is ultimately the place to do this. It is not hard to sell Hard Rock Stadium. It is competitive with all these stadiums going up around the country and maybe not as desirable as tourist destinations. We put our best foot forward. Last year, we had our national semifinal. This year, the Super Bowl is here. The following year, the [college] championship game is here, and the following year, a semifinal game is here. What that says is, South Florida is the capital of football.

What kind of economic impact do the bowls have?

Poms: Beyond the excitement of having a local team in your game, the economic development of having two out of state teams is unbelievable. Oklahoma-Alabama [last season] showed a $261 million economic impact. Media visibility is not just the broadcast but also the buildup of the week. Alabama-Oklahoma was the biggest ESPN property. They camped out on South Beach for a week with [network programs] SportsCenter and Game Day.

Barretto: This is corporate America at its best, entertaining top salespeople and having an open checkbook. A lot of tickets change hands four times before someone sits in that seat. There’s an open checkbook for restaurants and nightlife. This game is the single most-watched game in the world viewed by 70 million people in 170 countries. It certainly gets our name out there.

Mosley: The cumulative value is over $60 million. The two to 2½ weeks of bowls on ESPN is the highest rating period annually. The sponsoring value for our game was over $75 million. A lot is realized by [sponsor] Cheribundi and the city of Boca Raton.

Can you outline the changes if the playoffs go to eight schools? What would it do to the Orange Bowl?

Poms: We hope [they don’t]. South Florida is a special place. It used to be, every year, you could have a national championship game. In the college football playoff era, four teams get in there. If Clemson goes No. 1, 2, 3, 4, they go elsewhere. I think from our perspective, the four playoff-teams [format] is working. We advocate for South Florida and do everything to protect it, but as I mentioned earlier, you have to embrace change. We are prepared to make sure we keep that Tier 1 position.

What’s the most exciting thing about your job?

Barreto: All the great people I meet through the process. It’s great. The satisfaction [you get] from being born and raised here. I’m one of 11 kids, and we all grew up in Miami. I feel blessed to give back to the community and to be successful in business. It’s very fulfilling.

Mosely: For me, it comes being on campus for 26 years and working with student-athletes. Now, I’m not on campus, but when student-athletes and the coach come to us, I get to share it with you all.

Poms: I grew up in Miami and went to Orange Bowl games. I could never imagine I’d be doing what I am doing right now. It’s more than a job to me. ♦

• Rodney Barreto, chairman of the Miami Super Bowl Host Committee: Super Bowl LIV will be held at Hard Rock Stadium on Feb. 2, and televised on Fox. Barreto has been chairman since 2005, which encompasses the 2007, 2010 and 2020 Super Bowls. He has been actively involved with the Super Bowl since 1989, which has raised more than $100 million and in-kind contributions. He is the founder of The Barreto Group, Floridian Partners LLC and Healthcare Data.

• Doug Mosley, executive director of the Cheribundi Boca Raton Bowl: The sixth Boca Raton Bowl will be held at 3:30 p.m. on Dec. 21 and televised on ABC. The Boca Raton Bowl is owned and operated by ESPN Events. Its matchup includes teams from Conference USA, the Mid-American Conference and the American Athletic Conference. It has featured six conference champions. Mosley has more than 25 years’ experience in intercollegiate athletics and also a background in media.