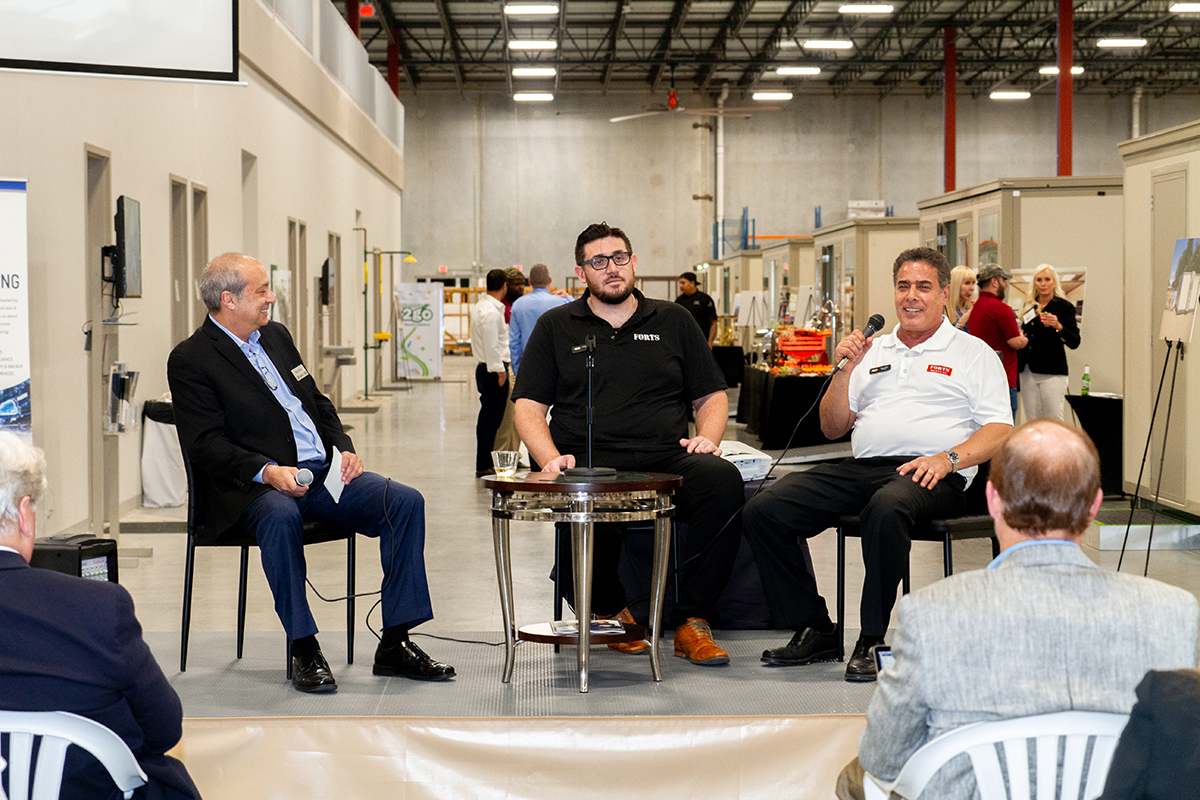 FORTS is an unfolding success story

FORTS Services is the result of a collaboration between founder and CEO Daniel Rimon and his friend and mentor, Peter Zadok.

Zadok is the president of Elite Aluminum Corporation, a Coconut Creek company that makes insulated sandwich panels and enclosure systems for the commercial and residential construction industries.

Zadok invented the FORTS system, an acronym for Fold-Out Rigid Temporary Structure, which is manufactured by Elite Aluminum. FORTS Services markets them as rentals.

FORTS’s 25 models can be transported on trucks. A demonstration at a recent “CEO Connect” event showed how they could be unfolded and snapped together in about five minutes.

Zadok is the inventor of the interlocking insulated aluminum panel system, and the Elite 2000 aluminum extrusion system, which is used for patio enclosures and room additions. He began a manufacturing operation in 1983. Elite Aluminum became the largest aluminum panel supplier in the country with more than $50 million in annual sales before the Great Recession devastated the business.

At 15, Rimon began working in the family business by pressure-cleaning apartment buildings and warehouses. At 18, he purchased his first property at a foreclosure auction in Hollywood.

After discussion with Zadok, Rimon decided to introduce FORTS as a rental company in South Florida, focusing on the entertainment and event market. Customers include the South Beach Wine and Food Festival, the Orange Bowl, Art Basel and the Ultra Music Festival.

Zadok and Rimon were interviewed by SFBW Chairman and CEO Gary Press at their 200,000-square-foot manufacturing plant in Coconut Creek. This transcript has been edited for brevity and clarity.

This space is huge. What does it mean regarding the scope of this business? It seems you can take this all over the country.

The reason we have such big spaces is because this product needs big spaces—plus we have big dreams. We currently have 175 employees and want to grow to 400 to 500 employees. >

How did your relationship evolve from being family friends to starting FORTS?

Zadok: I’ve known Daniel since he was born. I’m originally from Israel. I came in about 42 years ago. The first person I met was Daniel’s grandfather and we got a good relationship going. Daniel and I have always wanted to do something together. I followed his career and I realized that he’s the right person for the job, so we started talking about the rental idea. Daniel took the hook and we started FORTS Services a few years ago. Daniel got into a lot of different markets. The Rolling Stones are renting units for their concerts. CNN is renting units, The NFL. The unit is very unique, and you can see we have different models. Daniel built it into a nice operation and we’re looking to build it much further.

Rimon: Peter was one of those people who were basically family. So, when he first showed me the FORTS, I was floored by the product—not only by the concept but its quality. It’s not just that it folds open, but it looks unbelievable—sturdy, durable, luxurious. I didn’t make one decision without Peter. He really gave me the confidence to push and push and push when normally an older person probably holds back a little bit.

We constantly explore different verticals—push the envelope. So, the unit you see over here can be, depending on the window layout, a Lululemon or Kumon popup shop, a Lasik eye-surgery center, a command center after disasters, production offices, or green rooms for some of the biggest celebrities.

What gives you guys a competitive edge?

How is the product evolving over the next few years?

Zadok: We are learning, with South Florida as a prototype. As soon as we figure out how to reach all the types of verticals that we can rent the units to in South Florida, then we’ll take it all around the country. What we want to do is go to 200 locations.

What are you thinking now about marketing them over the next few years?

Rimon: We’re looking to explore different options, but the most effective marketing we’ve done so far is we just let a potential customer using it for free [for one week]. I would say 19 out of 20 times, they come back and ask for more.

If you’re in business and take risks, you make mistakes. What mistakes have you made along the way?

Zadok: The biggest mistake I made is I built a business on one vertical before the collapse of the market in 2006. With one vertical, the company did $50 million in sales in 2006. The vertical was sunrooms.

Never in my imagination did I expect the housing market collapse. I lost 70 percent of the business and had to let go of a lot of employees. And I say to myself I’m never going to make that mistake again. So, the lesson learned from that was, let’s invent the product that I can take into 120 verticals.

What’s the best advice you guys have ever received?

Zadok: It takes exactly the same effort to think big as it does to think small.

Rimon: When I was a kid my dad used to play this game where he would ask me what I want to be when I grow up. Doctor? Wrong. Lawyer? Wrong. He kept saying, “wrong.” The answer was to be successful.

Has there ever been a somewhat of a serious decision where you guys disagreed?

Zadok: If we don’t agree, we talk about it again—until we agree.

Zadok: Honestly, I keep other people up at night.

Rimon: Peter keeps me up at night. He calls me 24 hours a day. There is no time when it’s inappropriate for him to call.

How do you do shipping?

Rimon: It would depend on the volume. We can fit four units on one tractor-trailer and they can be unloaded with a forklift. For a single rental, we can ship one with a pickup truck and use a mobilizer—no fork lift needed.

What is the cost to rent?

Zadok: It depends on how many units you are renting, the time of year, how busy we are and what you are using the unit for. We have a rental right now for a few months. We have to be more reasonable than if the guy rented for two days. It’s sometimes $1,000 a week.

Where do you see future growth?

Zadok: In the sales market, the future growth is really in the medical field. In rental, it’s mostly in the event market, entertainment market. We do disaster relief. Right now, in Panama City, we have 16 units. In the Keys we’ve had units there since Hurricane Irma.

Do they meet building codes?

Zadok: Yes and no. Because it’s a temporary building, it has a special code for 180 days. We rented them to a fire department. The chief said, “I want for one year.” I said, “What are you going to do?” “I’m going to fold it, reopen it and start another six months.” That’s exactly what he did.”

Who are your main competitors?

Rimon: It depends on the use. We’re kind of a brand-new concept. Sometimes they substitute for air-conditioned tents, sometimes modulars, RVs or tractor trailers.

Do you have running water and ventilation?

Zadok: We can put water inside the unit. We have a special connection. A kitchenette can go with the unit. Sometimes we attach a sink. The AC recirculates.

If I ordered 100, when could I expect delivery?

Zadok: If you order 100, the first question is do you qualify as a buyer? If we suspect you are in the rental market, we don’t sell. We only sell to governments, such as municipalities and cities. We don’t sell to anyone who can compete with our rental market. For 100 units, it would take about four or five months.

What did you learn from the age gap between you?

Rimon: Logic would tell you he is conservative, but he is go, go, go.

Zadok: The reason I push is time. I don’t have much time.♦