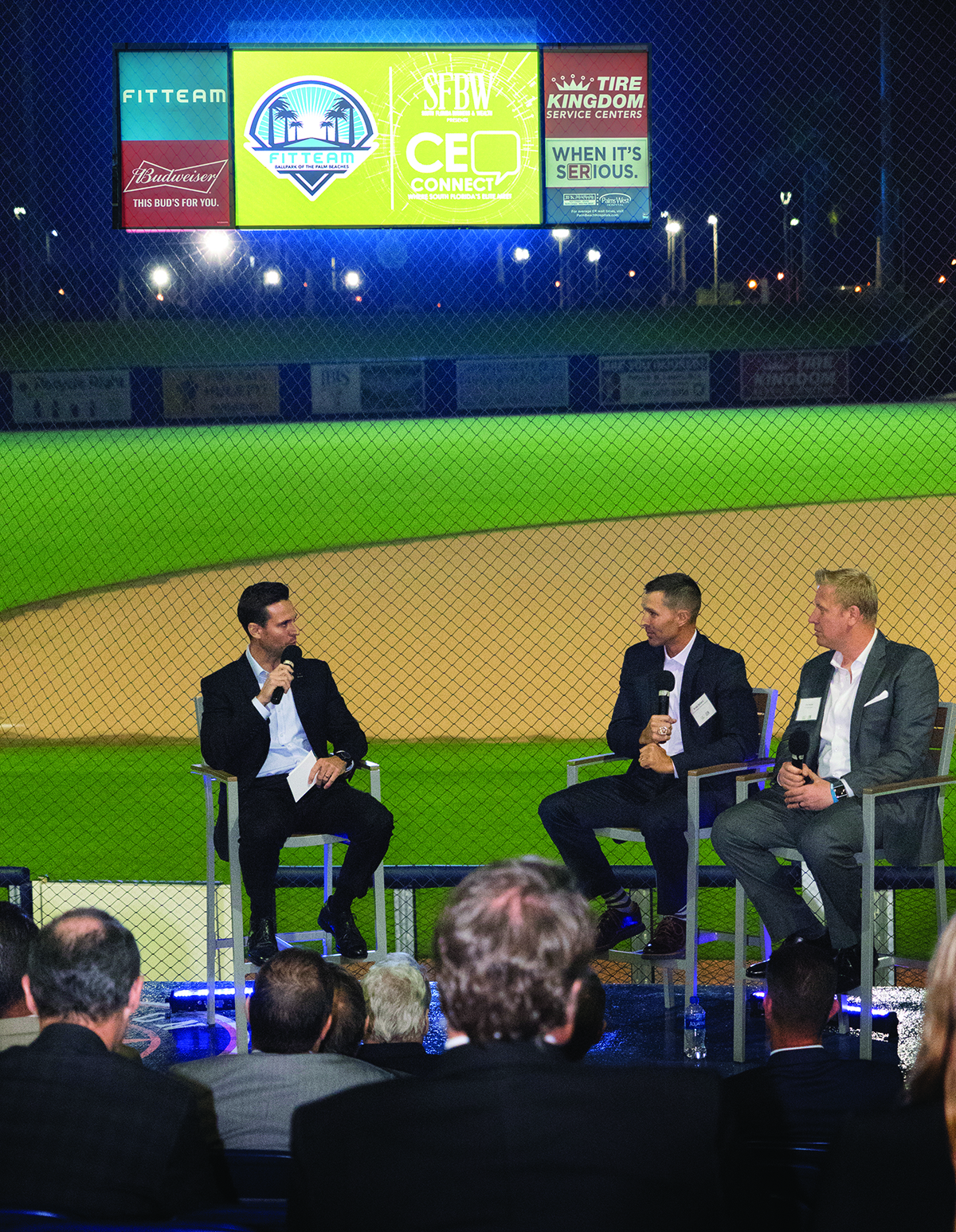 A Night at the Ballpark

This edition of CEO Connect involved interviews with Chris Hummel, the CEO and founder of rapidly growing FITTEAM, and Brady Ballard, general manager of FITTEAM Ballpark of the Palm Beaches.

The event was held at the ballpark, which is the spring training home to the 2017 World Series Champion Houston Astros and four-time National League East Champion Washington Nationals. The 160-acre ballpark complex has a 7,700 capacity stadium as its centerpiece, along with six practice fields per team. Fans will find shade, a 360-degree concourse, the Banana Boat Lawn, suites and party decks to enjoy games.

Hummel was in the U.S. Air Force for nearly five years and previously was a broker and owner of Hummel Real Estate and founder and CEO of Visionaries Worldwide.

Ballard was vice president at Historic Dodgertown in Vero Beach from 2013 through 2016, under owner Peter O’Malley. He spent eight years with the Daytona Cubs, a minor-league affiliate of the Chicago Cubs, and was general manager from 2010 to 2013. He began his career with the Jacksonville Suns, the former Double-A affiliate of the Los Angeles Dodgers, in hospitality and sponsorship sales.

He is a graduate of the University of Illinois, majoring in economics. He earned a baseball scholarship along with Big Ten academic and athletic honors.

Here are five key questions from the interview. The following transcript has been edited for brevity and clarity.

Brady, tell us about the ballpark’s design features.

Ballard: The openness and the grand entrance gives the fans a panoramic-view experience when they come up the steps and walk in. Many ballparks can be closed off and we had the benefit of being new. So, they took the best practices from other facilities from both the minor leagues and other spring training. I think if you have the best seat in the house with your nose against the net, at some point you’re going to want to walk around. We’ve got a craft corner bar, where people can look straight down into the bullpen and watch pitcher Justin Verlander and others, as close as you can get. There, you can hear the ball pop and feel the energy. My favorite features are our private suites and the grass. For me, spring training tradition is the grass, a blanket and bringing it all together.

Chris, what led you to start FITTEAM?

Hummel: That’s a great question. There are a lot of different supplements and brands out on the market in the nutrition space. For us, I noticed that products being very clean was missing. Our brand and nutritional products are organic, non-genetically modified. They’re vegan, gluten-free, kosher and soy-free. We have no artificial chemicals or sweeteners. Those are things that we have removed. It’s important for me to put the best nutrition in my body and that’s what I want for other people as well.

Brady, you were in the Air Force for five years, and then you went into real estate. Now you’re into supplements. What led you to do what you’re doing today?

Ballard: After the Air Force, I got into real estate and was very successful. But many of us know that there was a crash in 2008, so I was looking for something different at that time. I started researching nutrition, fitness and home health care. I didn’t see myself getting involved in home health care; there are very special, phenomenal people who do it. Nutrition and fitness grabbed my attention. Then one thing led to another, and FITTEAM was born four years ago in January.

How did the naming rights deal for the ballpark develop, and what is the scope of the relationship?

Ballard: It’s a 12-year partnership. We’re excited about the longevity. They’re a young and extremely fast-growing organization. We’re already talking about growing as a franchise. Chris is a guy who knows what he likes, and he was able to sit down with one of our executive staff members and Greg Bristow [digital sports marketing program analyst for the Ballpark of the Palm Beaches] and all his team, and together, we ramped up some interest and ideas. It all came about over a month and half. We wanted to make things happen for 2018 spring training and we able to get that done. The alignment, too, with the fitness aspect is that we work as a multisport venue. Through Chris and his ideas and his team, I think we can blend those two very nicely into the aspect of educating folks what they’re all about atFITTEAM, and all the benefits that come from the lifestyle. It aligns very well with the teams. We were thrilled, representing the Houston Astros and the Washington Nationals, to find a local partner but with a national brand and national consumers.

Hummel: It’s been a great partnership with Brady and Craig and the rest of the team here at the ballpark. We’re all about a healthy lifestyle, so to get involved with a marquee club is something we are very proud of and we’re all excited about.

What is the focus beyond the spring training, including the adjacent community park?

Hummel: That’s the biggest thing we continue to open people’s eyes to. I mean, all the attention is on spring training and the players’visibility. The team’s presence at this facility is about 9½ to 10 months out of the year. During spring training, there’s almost 250 players plus all the personnel on site during that month-and-a-half time span. But for seven months of the year, we have a lot of the minor-league players here. We often get the question about Florida State League, because there’s familiarity with some of the other ballparks in the area. The best that we can we can describe it is, there’s territorial elements and there’s the ownership of the franchise element. You don’t put two of the same businesses within a block of one another. It’s cannibalizing, and it wouldn’t be good business to have two teams that close.

Our focus has been developing programs and events at our 160-acre facility, which has 13 baseball fields and five international-size soccer fields. We were funded in good portion by bed-tax dollars, which we know is not our local money.

We host the second-largest high school-age summer tournament in June. It is only five days and it resulted in nearly 6,000 bookings for hotel rooms a night to the area. Between our two facilities, and sometimes even more, we are the destination that offers a great experience for families. A lot of our partners are of the highest-level caliber, high school baseball and soccer. Coaches are here with pro scouts, but they’re here continuously throughout the year. And November is busy. December, we slow down a bit. But that’s purposeful, because we’ve had so much activity on our fields, we’ve got to rehabilitate them. But that’s just the sports aspect. I can go on… we’ve had a concert here, we’ve had a car shows, birthday parties and so on.♦