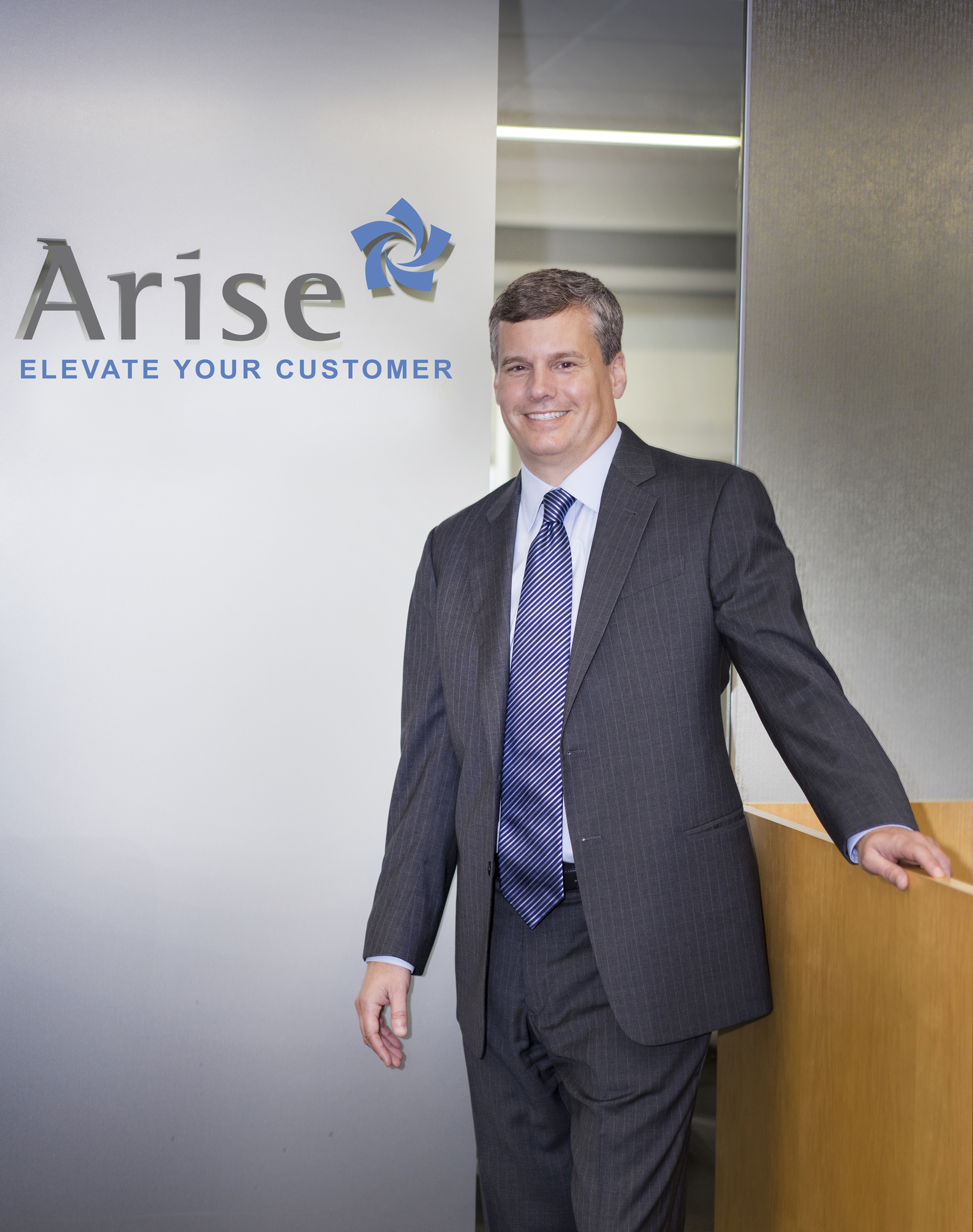 Think of a typical customer call center, and images of workers packed into cubes amid a cacophony of voices come to mind.

That’s not the case at Arise Virtual Solutions.

The Miramar company has created micro call centers in the cloud, where independent agents use Arise’s technology to create their own call-center businesses, typically out of their homes. There is a lot of flexibility, because agents can pick their own hours, determine which clients are the best fit and how many additional employees they want under them.

The call centers are micro, but the resulting numbers are big: 11,000 small-business owner-agents and nearly 26,000 agents total, says CEO Scott Etheridge. Arise has 200 employees in South Florida and 250 globally. Clients are in the United States, Canada, Ireland and the United Kingdom. Arise was owned by Accretive, from 2005 to May 2018, when it was purchased by Strait Lane Capital Partners, a private equity firm in Dallas.

Part of the success at Arise is its Starmatic Schedule Management Service, which combines telephony with state-of-the-art mapping, mobile-device technology and scheduling software that involves algorithms. Arise in 2000 won a Smithsonian Institute award for its technology and in 2013 won a Contact Center Technology Pioneer Award for its cloud-based mobile scheduling application.

The Starmatic system schedules in 30-minute increments and capacity can flex up or down 20 to 40 percent within a day, the company’s website says. Etheridge says businesses can send a text or email to Arise if they get a surge in customer demand. Since the agents usually work from home, Arise doesn’t have to wait for them to commute to work if there is a surge in demand.

When Hurricane Irma hit Florida in 2017, Arise took over a major cruise line’s customer operations so its employees could go home and prepare for the storm, Etheridge says. Arise has many Fortune 500 clients, but Carnival is one of the few it has permission to mention by name.

Weather is one of the factors that can affect Arise’s business, such as answering roadside assistance calls, which is why there is a big screen with a weather map at the company’s headquarters.

Other times, business flow is dictated by happier events, such as a marketing campaign that leads to a better-than-expected surge in traffic, Etheridge says.

Arise’s website says its network is engaged with customers 85 percent of the time, compared to the industry average of 65 percent. That means its clients can save 25 percent versus working with its competitors. Arise has clients in many industries, including e-commerce, financial services, retail, health care, hospitality, travel, technology, utilities, insurance and fitness.

“From the clients’ perspective, when you aren’t servicing, you aren’t paying,” Etheridge says.

Arise started in 1994 as a BPO firm called Willow and was renamed when it was purchased by Accretive.

“Before the Ubers of the world and the beginning of the internet, it was able to bring work to people in their homes who couldn’t get in to work or needed an alternative way to work,” he says.

Military spouses who move frequently or people in economically challenged areas are some of the people who can benefit from the Arise platform model. To prepare agents to use it, Arise has a virtual e-learning program, which won product of the year in 2004 from the International Customer Management Institute.

About 85 percent of Arise agents work solo, while the next tranche typically involves a few family members, Etheridge says. However, some agents have more than 100 people handling calls.

About 84 percent of the business owner-agents are women and 55 percent are minorities, Etheridge says. More than 50 percent of new agents are referrals.

Arise’s statistics show that 60 percent of its agents are college-educated and 40 percent plus have managerial experience, which also helps deliver a good value proposition for clients.

The agents earn money when they are scheduled to take phone calls, work in conjunction with chat bots or handle emails, Etheridge says. Some only work part time while others work 60 hours a week.

Service partners can be rewarded for the percentage of communications converted to sales or by customer satisfaction ratings—it all depends on what’s important to a client, Etheridge says.

Arise represents the trend of onshoring, because calls are answered in the country they are coming from rather than in centers overseas. Etheridge says that fosters better engagement with callers. Also, since the agents pick the industries they want to handle, they have a higher level of enthusiasm about the product or service they handle.

While Arise has many big clients, it is expanding its offering to smaller businesses as well, he says.

New horizons and giving back

Arise also looks to give back. It won an award in 1999 from the Presidential Task Force on Disabilities.

Arise was part of former first lady Michelle Obama’s “Joining Forces” program, which called Americans to rally around servicemembers, veterans and their families and support them through wellness, education and employment opportunities.

Arise is involved in providing agent opportunities to military spouses, who frequently have to move, Etheridge says. With Arise, they just have to pack and unpack their personal computers and hook up to the internet.

Arise also provides backpacks during back to school season, raising $12,000 and providing 855 backpacks as of this summer. Arise and competitor Next Rep also donated time during the Standup to Cancer Fundraiser.

Etheridge says, “Part of our motto is
we all have to work. Let’s do it in a different way, have fun and give something back.”♦

University of Florida football fans might not have fond memories of Arise CEO Scott Etheridge.

Auburn finished the season 11-0, but didn’t get a bowl game because it was on NCAA probation.

Etheridge’s performance wasn’t unusual. A Sports Illustrated article from 1993 says he was 65 for 65 on extra points and hit 79 percent of his field goal attempts to rank first in school history.

Etheridge was a team captain and named to the All Southeastern Conference team. He was a finalist for the national collegiate Groza Award, named after famed Cleveland Browns placekicker Lou Groza.

Etheridge says he was a high school soccer player who started kicking footballs as a lark and became a walk-on at Auburn, where he studied accounting. He had a few pro tryouts after college, but his hope of early retirement with NFL riches didn’t work out, so he did audit work for Coopers & Lybrand in Birmingham, Alabama. He was recruited by NBC and became chief financial officer of the station in Birmingham and then Chicago. He became vice president/CFO at NBC Sports in New York, working out of 30 Rockefeller Center.

“It’s probably one of the greatest business cards you could ever have for someone who loves sports,” Etheridge says. Among the legends he worked with was Dick Ebersol, who was chairman of NBC Sports.

Etheridge’s career took a twist when NBC decided to buy Universal. Etheridge was among a handful of people moved to Los Angeles to help put the companies together. Etheridge became VP of financial planning for the television studios, distribution and international networks.

He then moved to London to become CFO of NBC International, a $3 billion business unit.

He had joined a former colleague at Liz Claiborne in New York, overseeing a $1.5 billion partnered-brands unit, when he got a call in 2009 from Accretive about its Arise business. “They talked about this company that was doing outsourcing in a different way and was thinking about business process outsourcing in a different way. When I met with them I became infatuated with Arise and its business model,” Etheridge says.

He started as CFO, became chief operating officer and then was announced as CEO this past May. Etheridge originally is from the Atlanta area, so he likes being settled back in the Southeast.

His family, which includes two daughters, moved to Parkland, which led to a dramatic text message at 2:29 p.m. on Feb. 14, 2017, from one of his daughters at Marjorie Stoneman Douglas High School.

“There’s a shooter at Douglas. I love you guys,” the message said. He later found out his daughter was in the building next to the shooter. Etheridge rushed to the school and an anguished photo of he and his daughter ended up on the front page of the Wall Street Journal.

Etheridge says, “That was probably the worst 2½ hours of my life, but we are very fortunate that she was able to walk out as, unfortunately, a lot of people we know lost their lives or were impacted much greater.”