Call it a bipartisan miracle.

The U.S. House of Representatives voted to impeach President Donald Trump one day then passed his signature North American trade deal the next, casting the die for 2020 to start off with one less economic loose end than last year.

After more than a year in limbo, the United States-Mexico-Canada Agreement is poised to replace the aged North American Free Trade Agreement.

And uncertainty swirling around trade, tariffs and the future of global supply chains is taking a toll on the commercial real estate industry, particularly the industrial sector, which saw demand nationally tumble by more than a third in the second half of 2019.

“Certainty is always a good thing,” says Brian Latta of Bridge Development Partners, one of South Florida’s most prolific industrial developers. He says he has seen a rise in free trade zones and bonded warehouses as a counter measure against trade instability, but there is nothing like clarity for business planning.

Despite President Trump’s proclamation that “NAFTA was perhaps the worst trade deal ever made,” most experts contend USMCA isn’t a sweeping override but more like NAFTA 2.0. All the agriculture and food products that were tariff free under NAFTA remain the same under USMCA.

“There are some things I really like about it and there are some things that concern me, “says Coral Gables-based economist Tony Villamil, who negotiated the original NAFTA as U.S. Undersecretary of Commerce for President George H.W. Bush. “Overall, it is a very positive development.”

Villamil says he likes that USMCA tackles the siphoning of U.S. firms’ intellectual property, trademarks and digital technologies, which the nearly three-decades’ old NAFTA did not contemplate.

On the flip side, he says he has “minor” pangs about the new pact’s wage mandate of $16 per hour and local origin component requirements for the auto manufacturing sector. Such a policy, he argues, “interferes with free markets, potentially driving up production costs and could ultimately lead to higher cost for consumers.

Florida Agriculture Com–missioner Nikki Fried decried the new deal as leaving Florida farmers out in the cold by not addressing Mexican farm subsidies that flood the market with cheap seasonal fruits and vegetables.

“It is deeply disappointing that seasonal protections were not included in this USMCA implementing legislation,” she says. “For nearly a year, I have called repeatedly for effective, timely relief from unfair trade practices for America’s seasonal produce growers in the USMCA.” Fried said the new deal could cost Florida, one of the nation’s top producers of seasonal produce, 8,000 jobs and $400 million in lost revenue.

From an economic output perspective, however, Villamil says the deal does more good for Florida than bad.

“I think we should do a major effort to get Mexican companies to relocate to South Florida,” he says. “It will put them closer to their marketplace and they can get to know their customers better.”

While China remains the No. 1 offender for peddling in counterfeit goods as the country of origin for more than half of all the illegal goods seized by U.S. Customs and Border Protection, Canada is in the top five.

Diaz says passage of USMCA is a good start to ending trade-induced uncertainty and cracking down on intellectual property theft, but it “isn’t the holy grail. The holy grail for our clients is China.”

USMCA at a Glance

Leveling the Labor Playing Field: Contains new trade rules of origin to drive higher wages by requiring that 40 to 45 percent of auto content be made by workers earning at least $16 per hour. 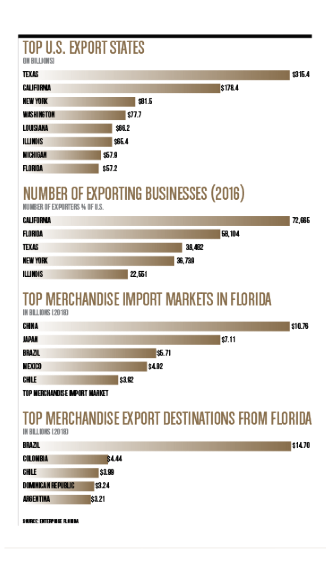