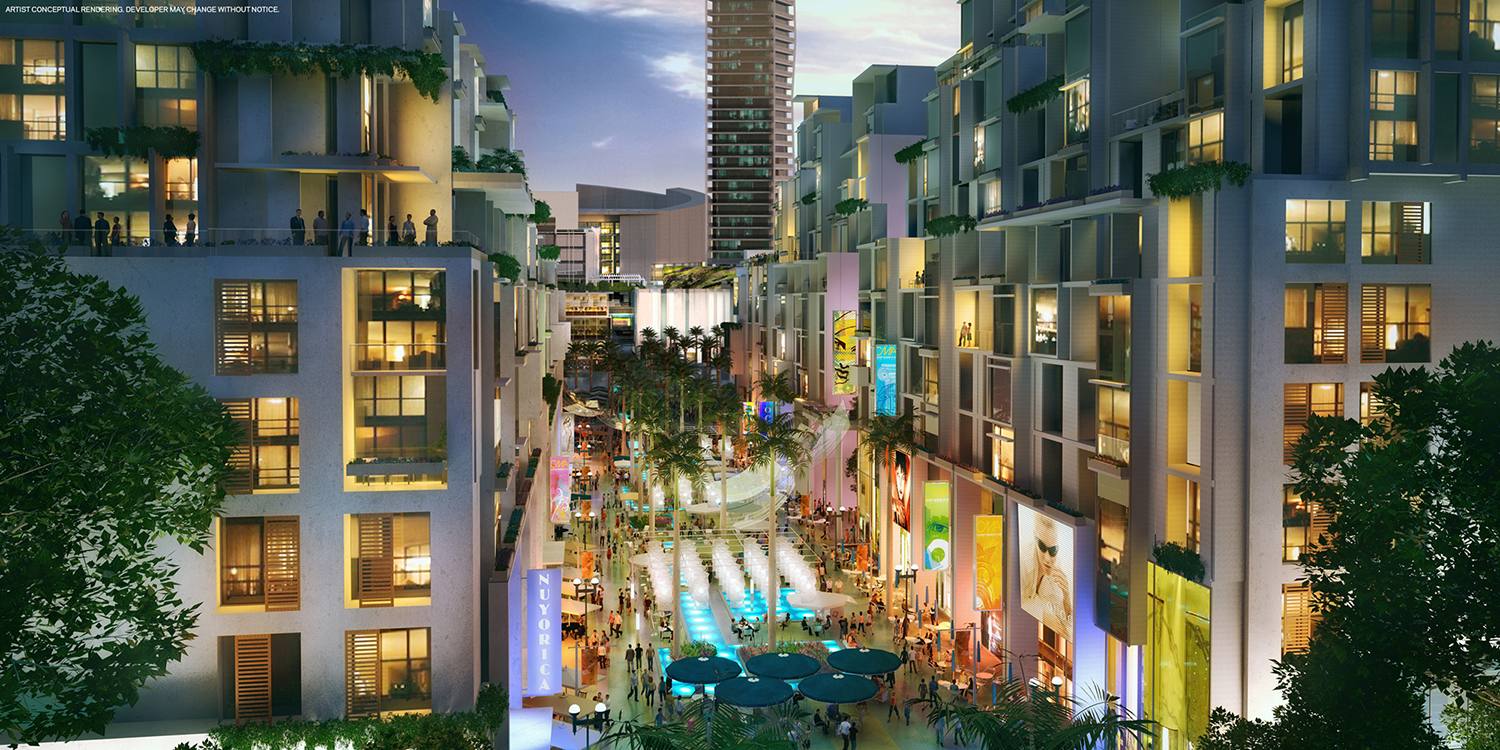 As SFBW celebrates its fifth anniversary, this occasional series will look at past story subjects.

The $4 billion project in downtown Miami is called the second-largest urban development in the nation, right behind New York’s Hudson Yards, which is being developed by Miami Dolphins owner Stephen Ross’ Related Cos.

Paramount Miami World center, which included partner Daniel Kodsi, has received its temporary certificate of occupancy and is nearly 90 percent sold with 150 unit sales already closed, Falcone said. “From the standpoint of amenities, it’s the best-amenitized building in the world. Nobody we know in the world has the amenities deck we have,” Falcone said. That includes soccer fields, a tennis court, indoor golf, indoor basketball, racquetball, a spa and a recording studio.

Falcone Group, Miami Worldcenter Associates and CIM Group earlier in the year completed the first building at WorldCenter, a 444-unit rental tower called Caoba. Falcone said it is attracting many millennials. The project website lists studios starting at $1,750. Falcone said the average price is about $2,500. Units range up to three bedrooms.

Falcone expects this year to start construction of a 400,000-square-foot office tower with development company Hines. He expects cutting-edge technology, more communal workspaces, amenities and connectivity to other parts of the city will drive demand. Worldcenter is in a walkable area and next to Metrorail, Metromover and Virgin Trains USA/Brightline’s MiamiCentral station, which will eventually have Tri Rail service.

Worldcenter sold a parcel to Zom Living, which has a $119 million construction loan to build Luma at Miami Worldcenter, a 43-story apartment tower with 434 units.

Worldcenter’s retail and restaurant space is under construction. Falcone said many tenant deals were out for signatures. Fitting with the current retail trend, he expects entertainment to be a big part of that, including cultural shows.

Hotel company CitizenM has broke ground at Worldcenter for a 12-story, 351-room hotel. This is the first of three hotels the Netherlands-based hotelier is planning in the Miami area.

Kodsi and Royal Palm Cos. also have announced plans for a condominium/hotel project called The Legacy Hotel & Residences. It will have a 255-room hotel with 278 condos from the 26th to 39th floors.

The building will include a rooftop atrium with a playground and event space, an international business lounge and what’s called the largest urban pool in Miami. Kobi Karp is the architect and ID & Design International is handling the interiors.

The Legacy’s studio and two-bedroom units, ranging from 400 to 949 square feet, can be rented without restrictions via Airbnb or the tower’s rental service.

Falcone said future phases of Worldcenter are being planned, including designs for buildings.

The 32-acre, mixed-use project at the former Fashion Mall site on University Drive in Plantation has its first office tenant. Aetna moved into 85,000 square feet of the project’s 177,000 square feet of office space. The office space is 95 percent leased and news reports indicate Office Evolution will open a 10,242-square-foot coworking space there, its first in South Florida.

The Rise apartments, which is Encore’s brand for luxury rentals, is under construction. Deliveries of the 700 units are expected to start in the summer, Falcone said. The retail is also 60 percent preleased and should be open in time for the holiday season. Tacocraft is planning to be one of the tenants.

There is an existing 263-room Sheraton hotel and two parking garages at Plantation Walk. Encore filed plans with the city for a 135-room Springhill Suites by Marriott and a nine-story, 164-unit, age-restricted residential building. The latter will be an independent living facility and an alternative to country club living, Falcone said.

An 180,000-square-foot office building with a heavy medical office component is also being considered, according to filings with the city.

The hotel, Island H20 waterpark and retail have opened at the $800 million, 350-acre resort about five miles southeast of Walt Disney World. The resort has 30 acres of lagoons and six acres are swimmable, Falcone said.

The 200,000-square-foot open-air Sunset Walk complex will have retail, restaurants, a movie theater and concert pavilion. Gloria and Emilio Estefan recently announced they are opening an Estefan Kitchen there.

The project includes a 184-room hotel and one- to eight-bedroom vacation cottages, which can be purchased as timeshares and rented by vacationers from Vstays and Rentyl. The first phase includes 187 cottages, but Falcone said 900 cottages are ultimately planned.

Falcone Group is also developing another Orlando-area project, Encore Club at Reunion with 863 vacation rental homes and 338 apartments. Reunion is a sprawling resort that includes three golf courses. Homes are priced at $250,000 to $5 million. Encore is also working with Jack Nicklaus to develop Bear’s Den at Reunion, which has 52 homes and a clubhouse.

Encore and Twin Creek Development have partnered on Beachwalk, a 1,100-acre mixed-use development off of Interstate 95 in the Jacksonville area. It includes the 14-acre Crystal Lagoon, which was recently filled after a six-month process. The lagoon uses technology that clarifies the water for enjoying water sports. Beachwalk also will include 450,000 square feet of retail, restaurant and entertainment space.

Leasing has started at Sentosa Beachwalk, a 348-unit apartment building. Lennar is among the four homebuilders at Beachwalk’s five neighborhoods.

Work is near completion on the 30-story, 348-unit The Rise at Flagler Village. Similar to the Worldcenter location, The Rise is being promoted for its walkability, which includes the nearby Fort Lauderdale Virgin Trains USA/Brightline station.