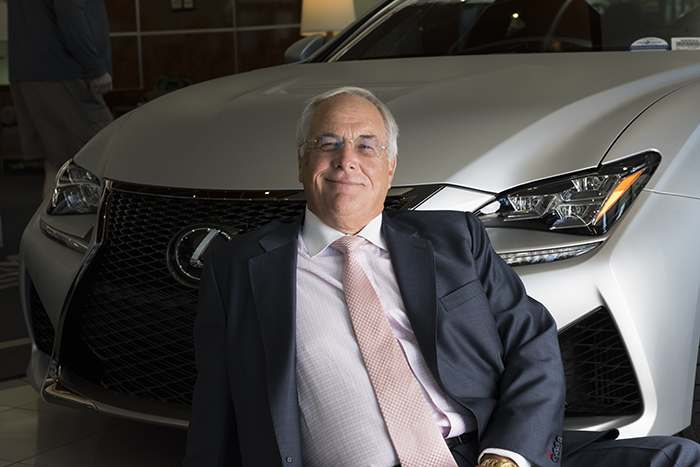 When Jim Dunn was growing up in Chicago Heights in the 1950s, he seemed to have a special gene that was driving him toward a career in the auto industry. “My parents told me that we went on a trip in our 1952 Nash American – I must have been 2 or 3 years old – and I was able to name every car we saw on the road,” Dunn says.

But he almost didn’t make it into auto sales, let alone running the world’s largest Lexus dealership in Margate. In his youth, Dunn, who has the build of a pro football player, was attracted to baseball, basketball, football and rock music… not cars. “I wanted to be a professional athlete or a professional entertainer. I also played in a rock “n” roll band,” says Dunn, who has a degree in liberal arts from Prairie State College.

To pay his bills, Dunn tried several different jobs, including a short stint selling Fords. At 22, he accepted a position as the finance and insurance manager at Yanson Chevrolet in Chicago Heights, a post that mainly involved sales. His friendly and outgoing personality was a perfect fit. “After I got into it, I loved doing sales. It’s fun and, just like sports, it’s very challenging.”

After Yanson Chevrolet, Dunn had sales manager and general manager posts at dealerships in Indianapolis, Indiana; Harrisburg, Pennsylvania; Joliet, Illinois; and Naples, Florida. His first time in South Florida was operating dealerships for the Zinn family. He returned in 2005 to run JM Lexus after running dealerships in Bradenton.

Becoming vice president and general manager of JM Lexus is a prestigious feat. It has been the world’s largest Lexus dealership since 1992. Last year, the dealership sold 8,300 new and 2,606 pre-owned vehicles and ranked No. 2 in the United States for sales of certified pre-owned vehicles.

JM Lexus was established in 1989; in 2007, it opened its Lexus Certified Pre-owned Superstore.

How does JM Lexus maintain its leading sales position? Dunn, who still goes to the showroom to sell cars himself, points first to his sales staff: “They’re fabulous,” he says. “They work hard and they work smart. They make all the difference.” JM Lexus currently has 448 employees (called associates), including more than 40 new car salespeople and over 20 devoted specifically to used cars.

Next, is the product: a wide-ranging line of automobiles with an international reputation for luxury, excellence and reliability. Lexus offers products ranging from the CT Hybrid, which sells for around $30,000, to the LFA Supercar, with 552 horsepower that carries a $383,000 price tag. “In 1989 [when Lexus got started], we had two sedans,” Dunn says. “Now, we have over a dozen lines of sedans and more than a dozen very popular SUVs.”

Dunn, who jokes that people sometimes confuse him with his friend, J.R. Dunn, the South Florida jeweler, stresses that growing the business and maintaining its sales leadership require constant attention and innovation. “I know that when I go shopping, I want to feel comfortable,” he says. JM Lexus, constantly polls customers and trains sales and service staff to provide what clients want and need.

One of Dunn’s key messages to employees is to examine and re-examine the way they do things in order to find improvements. “If it’s not broke, break it,” he quips. Being the world’s top Lexus dealer is not something he takes for granted. “When you’re No. 1, you’ve got a target on your back,” he says. “We are very competitive.” ?

Jim Dunn is proud of JM Lexus” commitment to charitable organizations and community work, including extensive volunteer work by employees.

One important program is the Youth Automotive Training Center, which was founded by Jim Moran in 1984 to educate disadvantaged youths in auto repair and life management skills.

Broward County’s Winterfest is one of Dunn’s personal community priorities. In April, he took over as chairman of the nonprofit, which produces a variety of community events and supports many charities. Among them is the Seminole Hard Rock Winterfest Boat Parade, which attracts about 1 million spectators along its 12-mile route and is watched by millions on television.

Dunn began volunteering his time to the organization about a decade ago, when he first attended a Winterfest black-tie ball.