Five Things to Know About Uchi 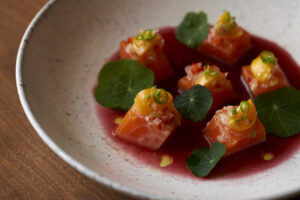 1) Thanks, Texas: What started in Austin as an insatiable thirst for knowledge about a Japanese tradition that few would associate with the cattle-crazed Lone Star State is now the culinary equivalent of the student becoming the sushi master. By the time Tyson Cole opened Uchi in 2003 out of a renovated home in south Austin, his continuing education included training at top sushi spots in the Texas capital and New York City, as well as an apprenticeship in Tokyo. However, the inventive, multicultural concept that earned Cole a James Beard Foundation Award in 2011 (Best Chef: Southwest) is anything but old school.

2) The buzz: The restaurant’s reputation for pitch-perfect flavor and texture combinations, world-class sourcing and artistic plating preceded it to Wynwood when the fifth Uchi opened early in 2021. But chef de cuisine Dina Butterfield, a native of San Miguel de Allende, Mexico, whose background includes stops at Uchi in Dallas and Denver, says there’s a reason why it’s love at first bite. “Normally, when you sit at a sushi bar, the chefs will make a little [dish] for you, they’ll talk to you about what you like,” she says. “We’re translating that experience to the table. Our servers have the knowledge to make adventurous suggestions or give you exactly what you want, based on your tastes—and depending on your budget.”

3) Sea it now: The selections at Uchi are meant to be shared, whether it’s cool and hot tastings, sushi rolls, tempura, sushi and sashimi, nigiri pieces (over rice), or the chef specials. The menu dazzles with a you-name-it/we-have-it roster of fish, much of it shipped from the famed Toyosu Market in Tokyo. Think Norwegian mackerel, Tasmanian ocean trout, New Zealand king salmon, Spanish and Japanese mackerel, African pompano, and countless other sea dwellers. 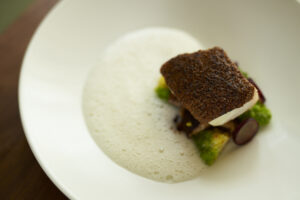 4) Digging in: The 10-course chef’s tasting is the best way to experience the scope of the menu. But if you’re going tackle it on your own, Butterfield suggests starting with her personal favorite, Hirame Usuzukuri. Thinly sliced flounder is served with candied quinoa to give it some crisp, an in-house soy-based sauce, and shaved daikon that she likes to roll up inside the fish to add more texture. On the hot tasting side, fork-tender halibut topped with shiitake mushrooms and baked buttery panko crumbs arrives with hazelnut for sweetness, grapes, and a coconut beurre blanc foam.

5) Miami musts: Butterfield says not to be embarrassed about slurping the juice served with the Ora King Crudo special. That’s because the tender slices of salmon (with pickled ginger on top) soak in a heavenly bath of passionfruit zu with vinegar, sugar, and a bit of Thai chili. “Just grab the bowl and drink the juice,” she says. “People do it. And I encourage it.” The Ora King Crudo and the halibut are examples of dishes with South Florida influences in mind. Same with the softshell crab roll with pickled cucumber, cilantro, avocado and soy aioli, and the akami crudo with bigeye tuna.

Is fear what prevents people from career success?

The Jills Zeder Group helped broker the sale of th

Looking for a place to celebrate after work? Uchi

A classic children's novel is the backdrop for lux

Get your tickets to SFBW's first Signature Event o