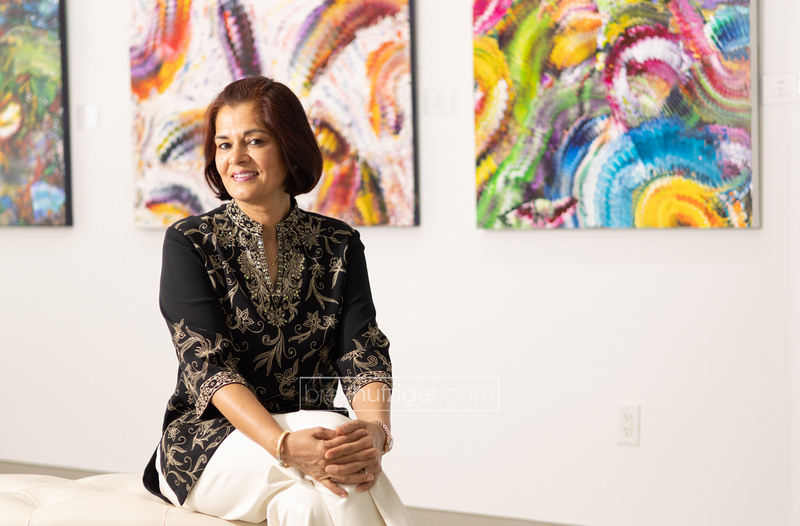 From IT CEO to Gallery Owner: A Miami Design District Story

How Payal Tak found herself lured by the art world

Though brushing acrylic paint on canvas would help Payal Tak unwind after her days running an IT company headquartered in McLean, Virginia, she never imagined her hobby would become her next businesses endeavor. But in the days leading up to the 20th anniversary of Art Basel Miami Beach, the former president and CEO would be found 1,000 miles south, bustling around her Lucid Design District gallery in Miami Design District just prior to its debut.

Though her mother instilled her with an appreciation for art since her formative years in India, when Tak migrated to the United States with her husband in 1986, she decided to pursue a career in technology, first obtaining a bachelor’s degree in computer science at Villanova University, followed by a master’s degree in telecommunications at Johns Hopkins.

She had primarily focused on the computer industry for a decade before establishing her company, Telesis Corporation, in 1998. For 22 years, Telesis provided information technology services and solutions in cybersecurity, data science, IT modernization and software development to several defense and civilian agencies within the federal government. Together with her executive team, Tak grew the company into an industry leader with more than 500 employees across the United States and overseas. And, although the field was male-dominated, 60 percent of her workforce was female.

Leading Telesis was “a beautiful, fantastic experience,” she says, yet finding balance was always paramount: “Any business owner will tell you that running a business or executing a growth strategy is not a nine-to-five job. I had plenty of extra-long workdays that were action-packed, high energy. And I used to jokingly say there are only 25 hours in a day and I work 24 of those.”

She relied on creating art in her home studio late at night to decompress and re-energize for the next day, an activity which often led to philosophical explorations. “If I’m able to move certain colors parallel to each other, or one on top of each other, what if I use different shades on the same canvas? How harmoniously are they coexisting?” she would ask. “And, as a result, I developed a technique; I call it ‘Carnival.’ I just use up to 18 colors and shades in the same painting. The final painting is this medley of colors, happily coexisting. The message of my Carnival paintings is, when so many colors can peacefully coexist on a single surface, why can’t humans peacefully coexist on a single planet?”

In 2019, Tak and her husband decided to escape the cold winters and move to South Florida where she could plunge into Miami’s art scene. A year later she sold Telesis to global technology leader Belcan Federal. But Tak asserts she was not quite ready to label herself with the “R” word just yet: “I shifted gears. I quote-unquote ‘retired’ but I’m not retired. Anything but retired.”

Instead, Tak discovered a 3,700-square-foot space near the de la Cruz Collection and Institute of Contemporary Art, Miami (ICA Miami) with eight curio-style spaces for solo artist showcases or breakout sessions, a full-size kitchen, her workshop and studio, and an outdoor area with a large wall for art installations. There she plans to welcome collaborations with health care organizations and those that support women’s and children’s causes, academic institutions, artists and art teachers.

“My career taught me the power of teamwork,” she says. “No bird can soar too high on its own. Lucid will also be a team effort. And my team consists of every artist who walks in the door and wants to share their art with the world.”

Lucid’s inaugural exhibition, Chroma, included her works along with those from 10 other local, national and international artists. Argentine-Italian artist Graciela Montich curated the show from her Miami base. “This exhibition will explore living in peace, live and let live, coexisting peacefully,” Tak says. “We must respect other inhabitants of Earth. So, there are going to be a variety of styles, table sculptures, abstract paintings, geometrics, collages. We’ll have art that is focused on self-awareness and emotional growth and we’ll have some surreal works.”

Though Telesis is unquestionably a success story, Tak says she welcomes her evolution toward becoming a gallerist: “My career has taught me that taking risks is almost essential if one wants to progress. Regardless of the outcome, each risky endeavor teaches a meaningful lesson that I leverage to keep growing as a person.”