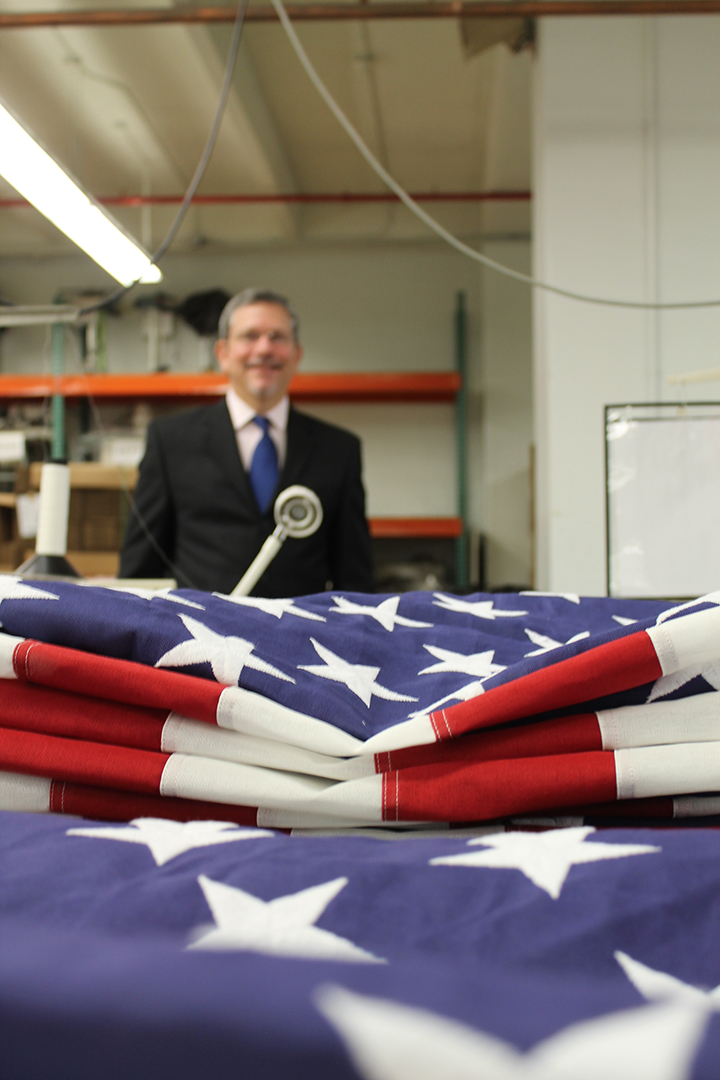 About 19 years ago, David Landsberg joined the board of Goodwill South Florida when the non-profit started inserting advertising flyers into the Miami Herald. Now, he’s adapted to leading Goodwill as CEO after leaving his position as publisher of the Herald. He has big shoes to fill since outgoing president and CEO Dennis Pastrana basically created the modern Goodwill in South Florida.

To those who wonder why he made the move, Landsberg says wanted a second career as a CEO, and Goodwill is in essence a $100 million business. It has 2,800 employees, 75 percent with disabilities. Goodwill last year was involved with 5,000 people, finding jobs for 1,200 either inside or outside Goodwill. Almost all the rest are in training programs.

One floor of the Goodwill headquarters is filled with about 300 workers making U.S. military uniforms and U.S. flags used in the burial of veterans. It’s a reminder of how the Miami area was once a major player in the apparel industry.

Goodwill’s custodial division cleans 135 state, federal and local government buildings in South Florida, helped by government agency programs that focus on doing business with the disabled. Doing so is a win/win for taxpayers because many of the workers could otherwise end up on government support, Landsberg says.

Goodwill is subject to regular wage laws, except for a program that allows a small percentage of workers with a high degree of disability who are paid on productivity, he says. Goodwill South Florida has Charity Navigator’s highest rating at four stars, based on financial health, results, accountability and transparency.

“The model is to build an entrepreneurial business that helps put people with disabilities to work,” Landsberg says. “It may be working here or ultimately working in private industry. We consider that an outstanding success – graduating someone from Goodwill to outside employment.”

Goodwill is gearing up a 50,000-square-foot commercial laundry business that is targeting customers in the health care field. The laundry facility, which is ultimately expected to provide 200 jobs in Liberty City, can handle 40 million pounds of laundry a year and was recently operating at 15 percent capacity. The University of Miami Health System is its top customer.

About 40 percent of Goodwill’s operations involve the 32 retail stores and two outlets, which have been transformed over the past eight years, he says.

“All but about four stores are the modern variety of what we call a Goodwill Super Store. What you will find typically is a 15,000-square-foot store or more that is professionally laid out and designed with roomy aisles and is well lit and feels like you might be in a mini Target,” Landsberg says.

Three months into his new career, Landsberg says he loves his decision. “If I’m looking for a second career, I’m blessed to have found this.” ?

David Landsberg says he was born in Baptist Hospital’s maternity ward during its first year. Since then, he has had three daughters born there as well. The only time he moved away was to study finance at the University of Florida. He later obtained an MBA at the University of Miami.

He joined the Miami Herald in 1984 in the financial area and became controller eight years later. In 1995, he helped parent company Knight Ridder develop a financial services center for the Herald and its other newspapers.

Landsberg twice used interim positions – first as CFO and then as advertising director – to get permanent positions. He then went on to become general manager and then publisher, a position he had for eight years.

His biggest event as publisher was a $50 million project to move the newspaper’s headquarters from downtown Miami to Doral. Landsberg says he was happy the move was done on time and on budget.