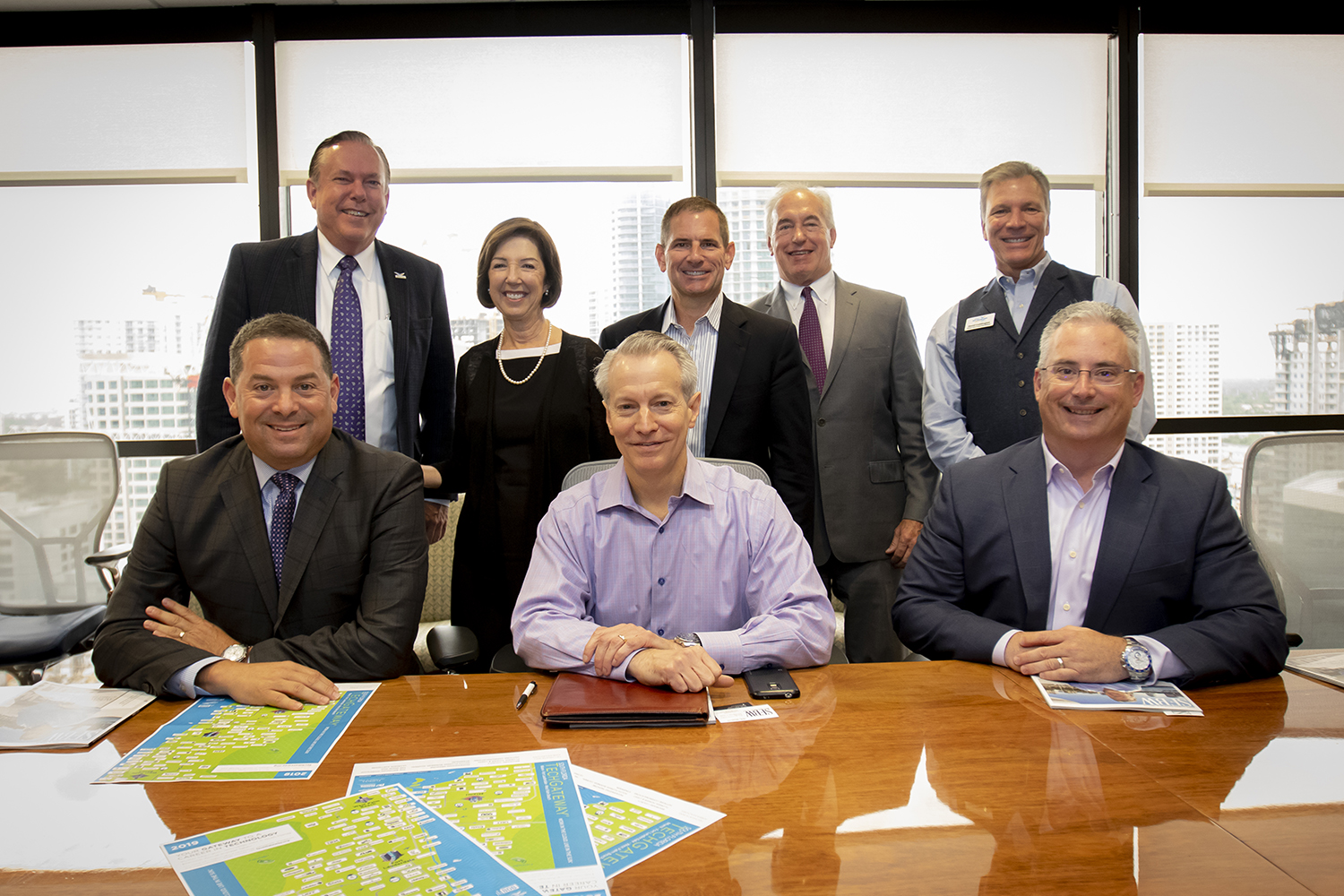 How the region can further fuel tech growth

Diversity, collaboration, a sense of energy, great weather and low taxes are some of the factors fueling the growth of the technology scene in South Florida, according to a panel convened by SFBW and the Greater Fort Lauderdale Alliance.

Still, there are challenges, such as a need for more startup and venture funding. There’s also a misperception about the amount of tech activity in the region.

This is the second in a series of four discussions SFBW is conducting with the Alliance, which is Broward county’s public/private partnership for economic development. The first discussion was about corporate headquarters. Upcoming discussions will look at the region’s aviation/aerospace and life sciences industry clusters.

• David Coddington, vice president of business development for the Alliance.

• Bob Fitts, executive director of Tech Lauderdale, which is powered by the South Florida Technology Alliance.

• Will Fleming, CEO of MotionPoint, a 300-employee, international software company in Coconut Creek that provides turnkey solutions for multilingual websites.

• Bob Swindell, president and CEO of the Alliance.

• Bob White, a shareholder who leads the technology and emerging companies practice at the Gunster law firm.

The panel was held at the Alliance’s headquarters and moderated by SFBW Editor-in-Chief Kevin Gale. The following transcript has been edited for brevity and clarity.

How is the TechGateway initiative (techgateway.org) putting South Florida on the map as a tech hub?

White: I think TechGateway has served a great purpose in terms of just letting us know what’s out there, who’s involved and how good the scene is. It’s really added a lot of positive momentum to what’s going on around here.

Fitts: One of the biggest problems we have here is talent retention. Our smart kids go off to college and maybe come back, maybe don’t. This tool shows people there are opportunities so that they don’t necessarily have to go elsewhere. It shows others that are interested in having their business here, that there is a wealth of talent here that can be drawn on. And it shows future employees that there’s labor market liquidity here. Without that, you can’t recruit talented people to come here.

Coddington: When we are recruiting companies or visiting with them—it doesn’t matter if it’s Amazon, Hewlett Packard or a smaller company—when we put this a map in front of them they feel like, “Wow, I had no idea the cluster of technology was so strong.”

Fleming: Once you got a handful of people together and started constructing a list, then everyone realized, “Oh, there’s meaningful critical mass, and the critical mass was pretty hidden below the surface.” There seemed to be a massive perception gap between the amount and quality of activity in the region and the perception.

What would be the importance of infrastructure?

Swindell: One of the first steps is building a more-efficient transportation system. The penny sales tax is identifying where there are gaps in high-quality fiber along the different transportation corridors and filling those gaps. We’re not going to be able to lay down much more asphalt, so we need better signalization, whether it’s coordinated lights, or lights that are more adaptive. Talking to the 5G [wireless network signal] providers, they say you’ve got to have that fiber as the backbone. If we are 5G-enabled, I think that will draw technology companies and really encourage technology to continue to grow and prosper here.

Maier: We’ve been doing a lot of deployments with the various municipalities in South Florida. I think we’ve added close to 1,200 new miles of fiber over the last few years for one of the wireless carriers down here.

What are some of the other notable aspects of the history, legacy and growth of technology in South Florida?

Then, what industry spins off companies faster than tech? Someone says, “I have a different idea to do that.” Then, you have Citrix. [Citrix co-founder Ed Iacobucci was a key executive with IBM.] People stay here and raise their families as the giants thin out their ranks here. EBuilder [which sold for $500 million] created 10 millionaires. Are they going to stay here? And we’ll see what happens with Ryan Cohen [founder of Chewy.com that sold for $3.35 billion]. Hopefully, he starts something after doing Chewy.

White: Scott Adams had Hiway Technology and sold it for about $300 million. It was huge, amazing, out of nowhere. [Adams subsequently has been involved in several startups and his name is on the entrepreneurial center at FAU.]

Fitts: There should be an acceleration. I have a friend at Ultimate Software who, with some of his friends, decided as much as they love Ultimate Software, they wanted to invest some of the money they made from going public. You’re going to start seeing the round-trip effect [from startup to success to new startup]. With Magic Leap, when eventually there’s a monetization, that’s going to end up enriching our venture capital community, which will help accelerate additional growth.

Udine: We need to talk about what we can do to help make sure that we grease the skids, such as partnerships with the Tech Incubator and Innovation Academy at Nova Southeastern University.

So how are we growing our tech ecosystem?

Coddington: We are working with Broward County Public Schools. When we first started the steering committee for Tech Gateway, we’re like, “We need to be in the universities. We should be in high schools” and then it’s, “Wait a minute, we really need to be in the middle schools.”

John’s been out a couple times to see those kids. We want to go to every middle and high school with the Tech Gateway maps.

Machado: We target schools, whether it’s from high school through all the universities here. At Ultimate Software, we have a great relationship with every university in South Florida. I basically bring on to my team about 150 engineers a year that come in through the schools, primarily Florida schools. The Gateway is really great at being able to show, “Hey, you don’t need to go to Silicon Valley. You don’t need to go to New York or Boston. You have opportunities here to do everything you wanted to do and get to stay home.”

Maier: We deployed a “Connected by Good” program, where we go and educate them on the various careers that you can have, from a technology perspective, to just provide that exposure. It really makes a huge difference for them to understand what opportunities are out there.

Fleming: When we talk about middle school kids or high school students, those students are typically very knowledgeable and advanced with respect to use of technology. I think technology becomes a very easy on-ramp to engage kids in discussions about business.

White: We’ve got to figure out a way to free up more money and make money more accessible. I do a lot of work with very early-stage companies, and it’s still very difficult for people. It’s very hard to get $250,000 for an early-stage software company if you don’t know the right people.

Fitts: There aren’t enough organized vehicles for early-stage capital in South Florida. There’s a lot of money here. It’s in country clubs and synagogues, and deals get done on the side.

I can name most of the well-known seed funds in South Florida, and I literally get this question hundreds of times a year. There needs to be a lot more of them, because those aren’t putting out much money either—a couple million dollars a year, which is really not enough.

White: Why aren’t there funds in 10 different industries, so that if you knew you wanted to start a retail software company, you would know who you could go to?

Fleming: Those who invest in a meaningful way in technology, tend to take a portfolio-driven approach. Tech startups tend to be higher risk than, say, an existing real estate asset, where there’s a great deal less uncertainty. But when more of a portfolio approach is taken, and someone is making, say 10 or 20 considered investments, on average, they can they have the opportunity to receive outsized returns, but not every not necessarily every single investment will be a winner.

What are some of the things that make our community unique and different as a tech hub?

Coddington: When North Carolina got in some hot water a few years back [the controversy about gender and bathrooms], we got some calls. And that goes right to the diversity piece. It doesn’t matter where you come from, who you are, that this is just a great place to live.

Maier: The other thing is really good collaboration. I think the business leaders in South Florida are so willing to share and learn from each other

Fleming: Collaboration is both within the county but also cross-county, because we live as South Florida, a region. Sometimes, the lines on a map—whether it’s a town, a city or a county—are largely irrelevant. I happen to live in Boca Raton and our office is in Coconut Creek. I’m deeply committed to the Broward community and all of the South Florida community.

Udine: I’m from the Northeast and every person that I know wants to either have a second home down here, or figure out a way to live down here full time.

Fitts: I moved here eight years ago from New York. My impression of what makes it different here is first of all, it’s a young state. There’s a certain energy here that’s different than other places. There is a very pro-business culture here. The state government wants to get out of the way. It’s very entrepreneurial.

Fleming: There’s an energy and optimism that comes with so many new people coming to our state.

What can we do to further brand and grow our ecosystem?

Fitts: The SFTA recently formed a joint venture with the Broward Workshop, with the facilitation of the Alliance, called Tech Lauderdale. The Workshop wanted to do something because Broward doesn’t get the same attention as Miami does. The mission is to really enhance the awareness of what’s going on here. We have several large events a year, such as IT Palooza and Sup-X: The Startup Expo, but we’re also going into some new programming that will be announced later.

Coddington: One of the things that we were working on is to take Tech Gateway and build a brand here and then build it outside the area. The D.C. market and the Boston market are both academically dense markets, so they actually produce more technologists than the market can absorb. We want to put the Tech Gateway map in those markets and go after those universities and students and let them know there are opportunities here.♦