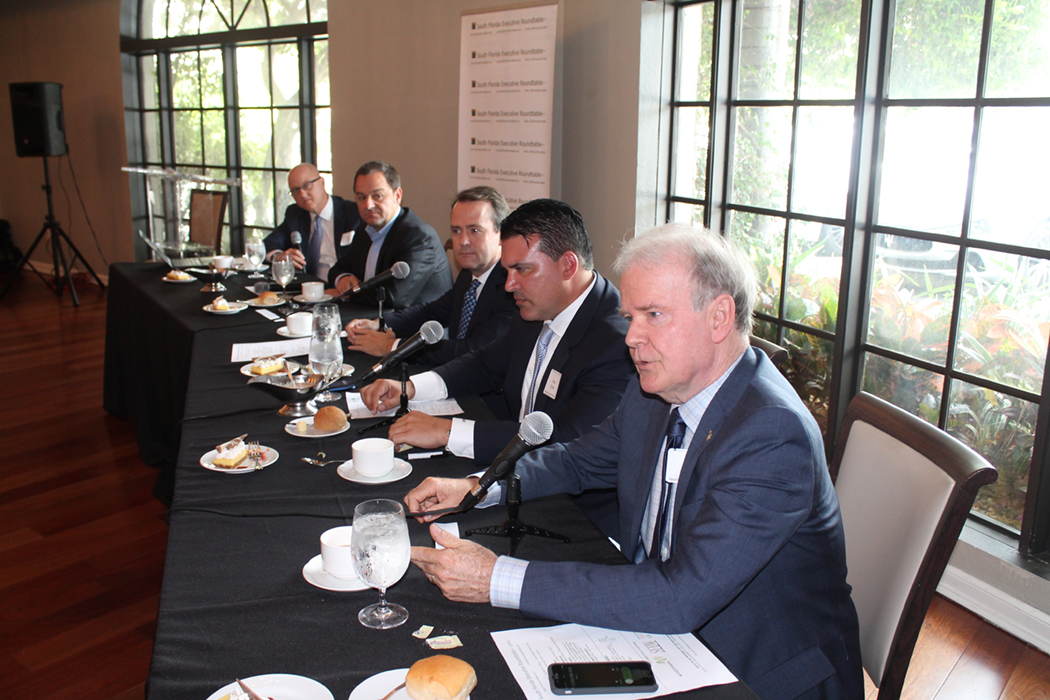 Amid a presidential candidate squabble over health care costs, a panel of high-level executives in the field offered some remedies of their own during an Oct. 25 discussion at the Coral Gables Country Club.

The South Florida Executive Roundtable panelists talked about issues with the U.S. fee-for-service system, the evolving role of hospitals, big data and how consumers will play a key role in squeezing out costs.

The moderator was Jim Sink, a principal in the health care practice at RSM, an audit, tax and consulting firm. The panelists:

• Jeff Mihm, CEO of Noven Pharmaceuticals, a Miami company known for its expertise in transdermal patches.

SFBW is the media sponsor for the monthly roundtables. Here are some of the highlights discussed by the panelists.

Fee-for-Service: The payment and compensation system is a fundamental problem for health care in the United States, which has the highest costs in the world, Keeley said. The goal needs to be compensating doctors to keep people healthy rather than paying them to treat people who are sick. Consumers need education on costs and quality of care. They also have to have a financial stake, otherwise there is no incentive to be cost effective, he says.

Cost Consciousness: Doyle noted the rise of clinics in drug stores, such as CVS and Walgreen’s. In one way, the competition is disconcerting for a hospital CEO, “but the point is to drive down the cost of health care,” he says. The Leapfrog Group has a website that allows consumers to compare costs and determine who is the best provider, Keeley said. Baptist has a six-member team that can give price information within an hour 24/7.

More Skin Patches: Mihm said Noven is not only focused on products with better efficacy and safety, but investing heavily in technology that can deliver more types of molecules, such as proteins and peptides.

Technology Mashups: Doyle said many patients miss appointments because they need a ride or have trouble finding parking. A ride service such as Uber could be integrated into a hospital’s app and website to solve that. It could also be used to deliver medications.

Big Data: Baptist is investing $100 million in information systems, and Keeley noted a “60 Minutes” report that showed IBM’s Watson technology platform is way more capable than humans in capturing and analyzing vast amounts of data, which is important for health care outcomes. Devices can be networked to feed more data.

Pressure on Device Makers: Villegas says Medtronic invests about 10 percent of its revenue in research and development. It has changed the R&D process to ensure projects are killed in the early stages if they don’t add value and reduce costs.

Wake Up, Washington: Universal coverage is needed to keep the uninsured from relying on the high-cost routine of showing up in emergency rooms, Keeley says. Too many young people are not signing up for insurance, which fills insurance pools with too many older and sicker people. Everyone needs to be in the risk pool, he says. Villegas says the nation’s health care system needs to stop fostering high-cost procedures, which happens now because that’s where the money is.

Evolving Hospitals: Ten years from now, hospitals will be focused on major medical procedures with an increasing number of services done on an outpatient basis, Doyle says. Already, some orthopedic procedures that once required five days in a hospital are outpatient treatments.

Culture is an Issue: Doyle says he encounters families who won’t even broach the topic of hospice care. Keeley said the United States might never adopt the European attitude that it’s better to die at home, but value-based systems will have an impact. ↵