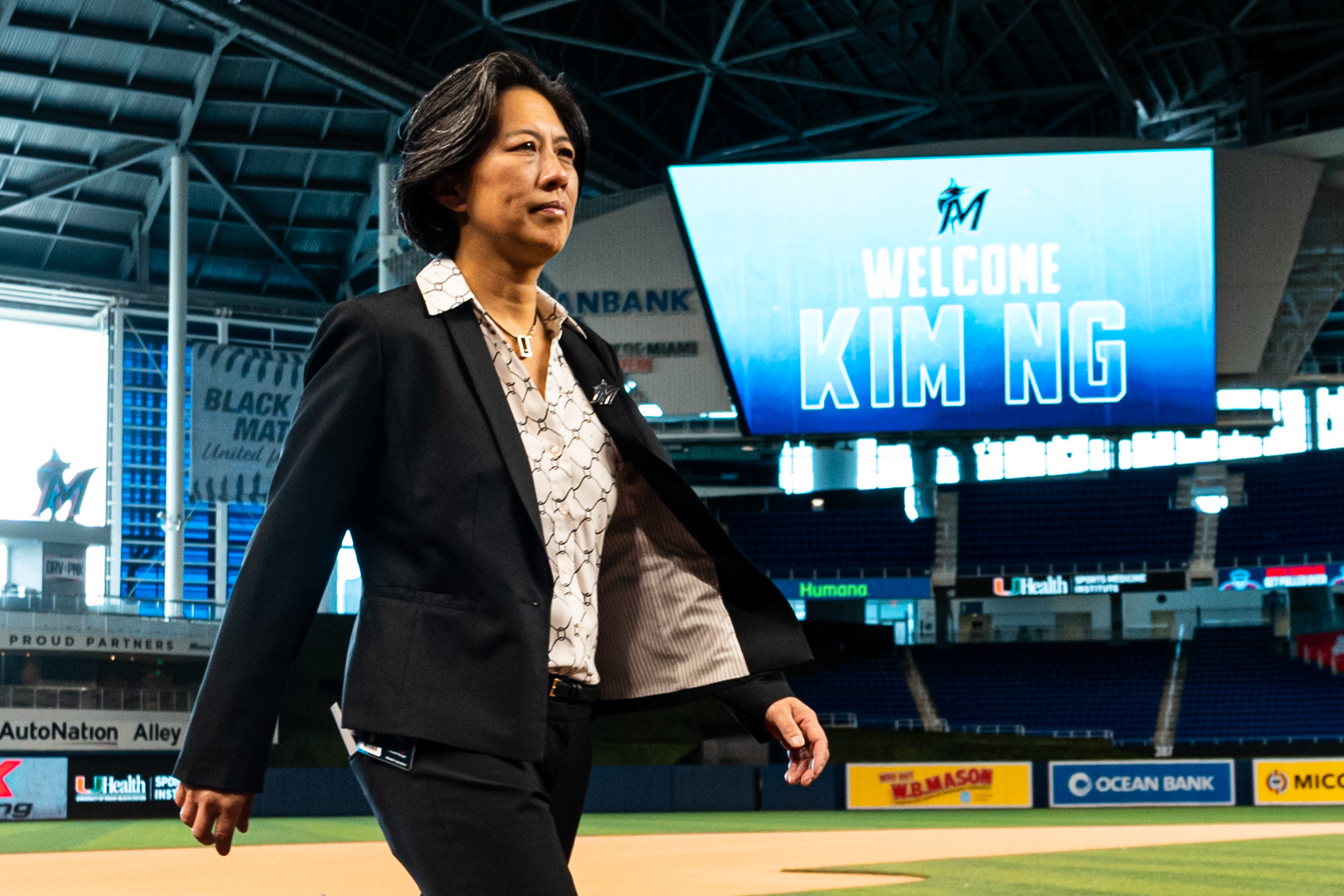 Kim Ng remembers the moment. She was 8 years old and attending her first Major League Baseball game on a bright summer weekend afternoon. Ng recalls navigating the interior corridors of Yankee Stadium until she reached her section and finally walked into the open air at one of the sport’s most hallowed ballparks. “There were the seats and the field and the green,” Ng says. “I heard all of the sounds of the stadium.” It was one thing, she recalls, to watch games on television with her dad. But it was quite another to see it, hear it and feel it in person.

Ng was born in Indianapolis, but she grew up in New York—her family moved to Fresh Meadows in Queens, where she went to elementary school and played stickball with the neighborhood kids.

“First base would be the red car on the right, second base was the manhole, third base was the green car on the left, and there was another manhole for home,” she says. “It was kids just enjoying the game.” When she didn’t have anyone to play with, Ng would throw a ball against the stoop and catch it—“stoopball,” she called it—or she’d create an outdoor handball court using the house chimney as the wall.

In November 2020, when the Miami Marlins and their CEO, former Yankees great Derek Jeter, introduced her as their new general manager, Ng (pronounced “Ang”) not only became the first female general manager in baseball history, but she became the first woman to ever hold that position for a professional men’s team in major North American sports. She also became the second Asian American to serve in that executive capacity for an American pro sports franchise. (Ng’s mother, Virginia, was born in Thailand; Jin, her father, was American-born of Cantonese descent.) Farhan Zaidi, general manager of the Los Angeles Dodgers from 2014 to 2018, was the first.

Her hiring marked the latest rung in Ng’s baseball climb, a 30-plus-year journey that started with an internship in 1990 with the Chicago White Sox. But the moment meant so much more to so many others. It was reported that Yankees’ broadcaster Suzyn Waldman cried when she heard the news. Among those to send congratulatory notes to Ng were former first lady Michelle Obama and tennis legend (and gender equality advocate) Billie Jean King.

“I got calls from and text messages from people I’ve known over the years who were so excited to tell their daughters and wives,” says Ng, who turned 52 four days after the announcement. “I got voicemails from front-office executives just so happy that I had broken through, but more for the sport and more about what it meant about us in society.”

As her words suggest, Ng is acutely aware of the gender implications of her hiring and has taken on the mantle of responsibility. “I try to be proactive in helping others, particularly women in the workplace,” she says, “whether it’s giving advice, mentorships, providing camaraderie or letting others know they aren’t the only ones out there dealing with difficult situations in terms of being a woman or someone of color.” Ng puts time into serving on diversity and initiative panels in communities, and advocates to “educate people and improve the situation for others.” Ng cites her mother, a banker, as being one of the influences in her life—a strong, independent woman. “The least I can do is pay that forward,” she says.

Off the field, Ng wants the Marlins to engage in the South Florida community more than ever. “I would like to bring some programming to the organization around scholarships for girls,” she says. “We have a great analytics team and department, so maybe get some programs built around STEM (science, technology, engineering and mathematics courses) for girls and young women, especially those in our underserved areas.”

Of course, there are on-the-field legacies she wants to leave in Miami when it comes to executive decisions with the Marlins. “We hope to bring an exciting brand of baseball to Miami,” she says, though not promising a World Series just yet.

As to how long she will make the Magic City her home and lead the Marlins, Ng prefers to keep her eye on the ball that’s in front of her. “I’ll keep doing the best that I can and if it’s not good enough, then someone will tell me at some point. If it is, then I’ll be here for a while.”