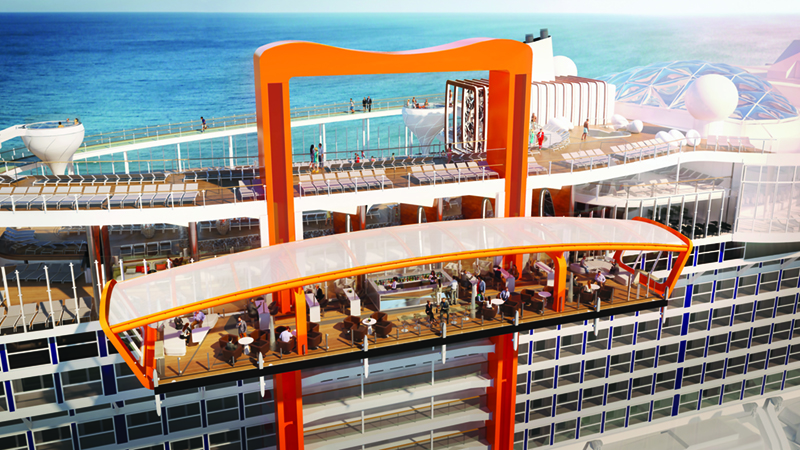 When Celebrity Cruises CEO and president Lisa Lutoff-Perlo set out to introduce the company’s newest ship, Celebrity Edge, she wanted to go big. It’s the company’s first new ship class in a decade, and to mark the occasion, Celebrity hosted a compelling event at its PortMiami headquarters.

“I would say the reveal of Celebrity Edge was probably one of the biggest reveals in the industry’s history of introducing new classes of new ships,” she says. Guests flew in on chartered flights from around the world and were escorted by police to Miami International Airport after the event.

Because the ship is under construction, due for its first sailing in December 2018 from Port Everglades, attendees experienced the preview by way of an immersive virtual reality tour. Celebrity also showed full-size mockups of the ship’s staterooms and lounge areas.

There also was a mockup of one of the ship’s signature features, the Magic Carpet. It’s a lounge the size of a tennis court that moves up and down the side of the ship like an elevator. When the ship is in port, the Magic Carpet can lower to water level, providing an intimate connection to the ocean that’s unusual for a cruise ship.

“How darn cool is that thing?” says Lutoff-Perlo. “Where will you ever find that except on Celebrity? My favorite experience on the Magic Carpet is dinner on the edge, where it sits 16 floors above sea level at deck 16 and our culinary team will create these under-the-stars, under-the-moon experiences for our guests.”

Lutoff-Perlo, who previously was interviewed by SFBW as part of its CEO Connect series of stories, has experience with big reveals.

“My first was when we introduced the Solstice class in 2008,” she says. “It was very important to me and my team that we did something very grand to show the industry not just how special this class of ship is, but Celebrity is. We used this opportunity not only introduce Edge to the world, but reintroduce Celebrity to the world.”

“You can probably count on one hand the class of ships that have transformed the industry. And the Edge class is one of them,” Lutoff-Perlo says.

This class of ship has nearly double the number of suites than the cruise line’s Solstice class. Kelly Hoppen designed the interiors and expanded the staterooms roughly 23 percent in terms of square footage and increased the bathrooms by 10 percent.

A unique feature in the staterooms is the “infinite veranda,” which creates a seamless transition from inside to outside. Instead of having a barrier between the room and the ocean, passengers push a button and the glass door slides into the wall, opening the view. Another innovative touch is that the lighting and temperature can be programmed by the passengers for a desired atmosphere, day or night. King-size beds are included.

Guests who book cabins in the retreat area may use an exclusive pool on the sundeck, and the lounge area has a 24/7 butler service.

The suites come in two categories, Iconic Suites and the Edge Villas. The former spans 2,600 square feet with two bedrooms and two bathrooms. Windows wrap from floor to ceiling, offering panoramic ocean views. And it includes a 700-square-foot veranda.

The two-story Edge Villas feature private plunge pools and direct access to the sundeck. The penthouse suites have hot tubs on the veranda and dual walk-through showers.

The garden has whimsical details such as butterfly tree-like structures equipped with stages for musicians, which was demonstrated during the reveal. “The rooftop garden is a very special place,” Lutoff-Perlo says. “The whole resort deck is just beautiful, and what Tom Wright did with the architecture that makes it a two-level space—again, we bring in the ocean and the destination in a very meaningful way that is outward-facing and gives our guests a closer connection—really dominated our thinking.”

Four ships in this new fleet are being built, with the possibility of a fifth. Home port will be in Fort Lauderdale. In June, Celebrity will host another event to reveal more of what to anticipate on the Edge.

The company is now booking trips on Celebrity Edge is now open. Visit celebritycruises.com/edge or talk to a travel agent. ↵