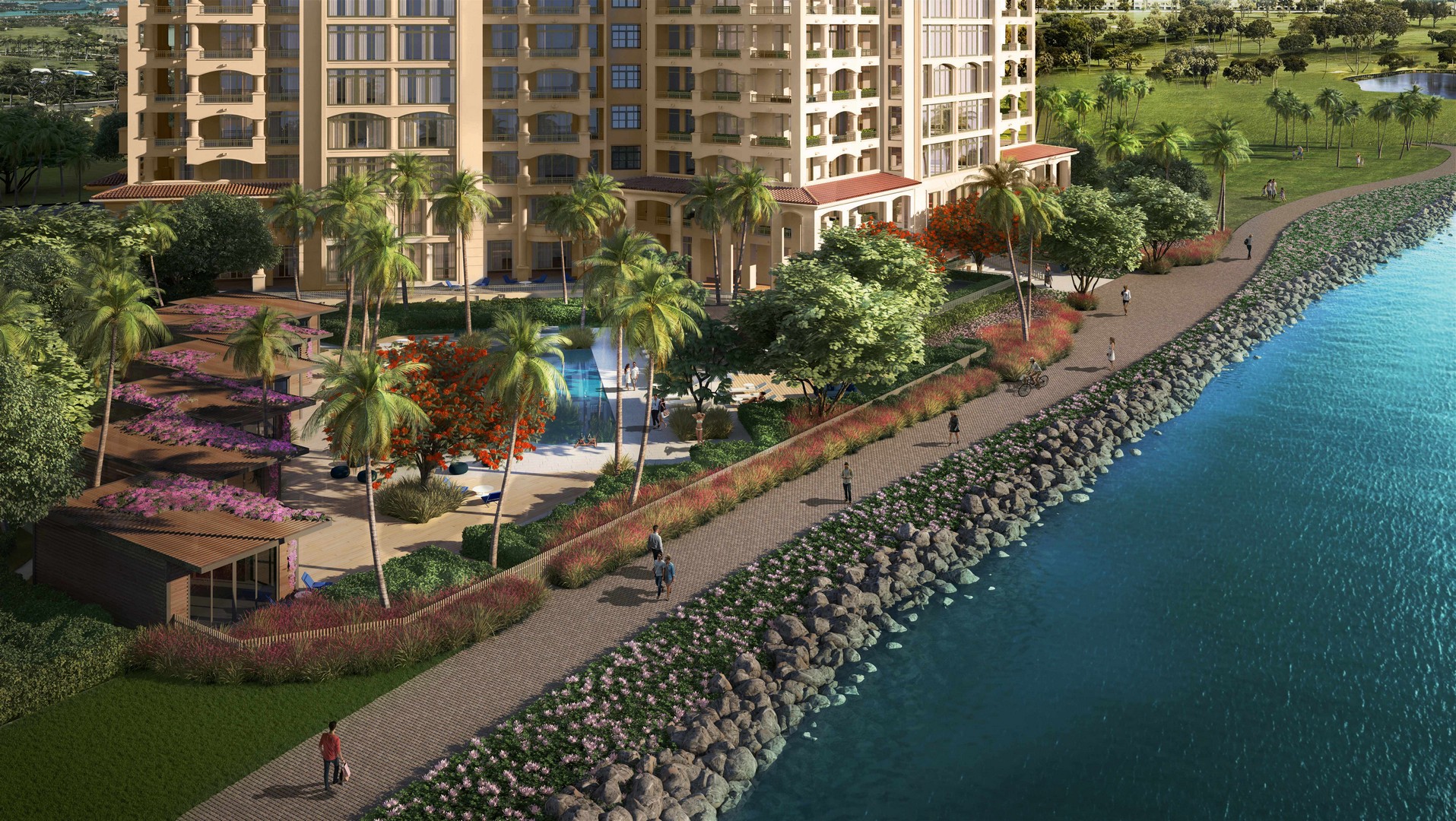 South Floridians have more than a little nostalgic love for Mediterranean architecture. That romance has lasted for decades both in new builds and renovated properties. So, how do we create a modern interpretation of the style that has defined our region since days of Addison Mizner? Take a look at Palazzo Del Sol, the only new development on Miami Beach’s Fisher Island since 2007.

SFBW published a feature on Palazzo Del Sol in the May issue and this online version now features a new slideshow of the completed project. (Click on the image below.)

Reimagining Mediterranean architecture is no easy task, but the 10-story, ultra-luxury condominium’s architect, Kobi Karp, starts by simplifying it, without losing its distinctive terra-cotta trademark. Inspired by William K. Vanderbilt’s historic home on the island, Karp has used clean lines and “less-is-more” details to achieve the next wave of the iconic style. He has also incorporated floor-to-ceiling glass in the residences, a feature unheard of in traditional Mediterranean structures. In the penthouses, the glass stretches an impressive 18 feet tall, offering panoramic views of South Beach’s Government Cut, Biscayne Bay and downtown Miami.

To add dimension to the project, Karp designed Palazzo Del Sol’s rooftops with multilevel floating gardens and pools accented with a landscape design by Enzo Enea. He also added open terraces and verandas to each of the building’s residences.

Construction on Palazzo del Sol began in spring of 2014, with sales offered first to existing Fisher Island residents. The project’s units, which now are about 60 percent sold, range in size from 3,800 to 9,800 square feet, selling between $6.5 million and $35 million. All units feature private elevators, Boffi kitchens and baths and 10-foot interior ceilings (penthouses have 15-foot ceilings).

The property offers plenty of posh amenities, such as floor-to-ceiling cabinetry for private wine collections, a private movie theater, a state-of-the-art fitness center designed by The Wright Fit, a Kidville-designed children’s playroom and an aperitivo bar.

“Our vision for the final development on Fisher Island harmonizes with the community’s existing Mediterranean-inspired style, while taking into consideration the sensibilities and needs of the new era of buyers coming from the United States, Europe, Latin America, Russia, Asia and the Middle East,” says Fisher Island Holdings CEO and developer Heinrich von Hanau, who also has been a resident of the island for 13 years.

Although original plans called for no more than six units per floor, von Hanau says that some early buyers purchased multiple units with the intent to combine them into larger residences. He says that buyers, primarily European and South American, are attracted to the oversized floor-through layouts, the technology and the five-star amenities and services available within 100 feet of their private elevator foyers.

During the last two years, Fisher Island has undergone a $60 million renovation to its amenities, including the oceanfront Beach Club; Vanderbilt Mansion (built in 1935); the nine-hole, par-35 championship golf course designed by P.B. Dye; the state-of-the-art tennis center with 18 lighted courts (two grass, two hard and 14 Har-Tru); and two private, deep-water marinas. In addition to its recreational facilities, Fisher Island has seven restaurants, a day school, a post office, a full-service salon and the five-star “Spa Internazionale.”

Long considered a local playground for celebrities, athletes, entrepreneurs and billionaires, the island is accessible only by yacht and car ferry. Seasonal and permanent residents comprise about 675 families from more than 45 countries. Below are renderings of the project during the conceptual stage.