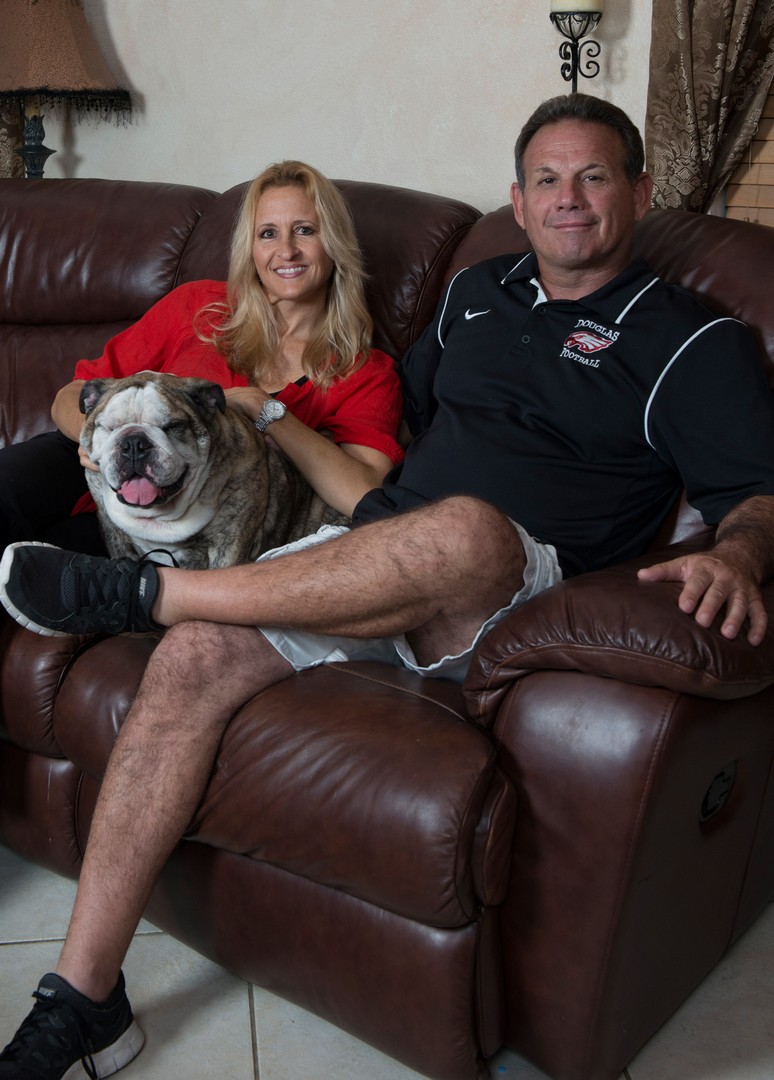 Scott Israel and a lesson in crisis management

Several years ago, when I was editor of SFBW’s sister publication, Lifestyle magazine, I had an opportunity to do an in-depth interview of Broward County Sheriff Scott Israel.

I traveled to his home in Parkland and met the sheriff and his family. Pictures were taken with the family dog as they posed on the couch.

Israel was at the pinnacle of a career as sheriff of the second-most populous county in Florida after previously serving as commander at the Fort Lauderdale Police Department and chief of the North Bay Village Police Department.

It seemed like Israel was a highly competent law enforcement leader after decades of what I called colorful characters who served as sheriffs in Broward.

One was arrested on bootlegging charges in 1927, another served two decades and profited from illegal gambling, one gained national attention when his crime lab cooked up crack cocaine to use in stings and another resigned after pleading guilty to tax evasion and mail fraud.

Then there was this line, which seems a bit prophetic: So, there’s no wonder that current Sheriff Scott Israel has been under the media microscope since assuming office in 2013.

It’s hard to overemphasize how much that is true today in the wake of the Parkland shooting that killed 17 and wounded 17 more.

Newly elected Gov. Ron DeSantis removed Israel from office. Israel says that was politically motivated and has indicated he may seek redress through the Florida Senate or litigation. His attorney indicated he will run for re-election in 2020, the Miami Herald reported.

So what went wrong for Israel?

Israel rightly said after the shooting that deputy Scott Petersen, a resource officer at the school, should have tried to engage with the shooter. However, it took many months to learn that departmental policy was that deputy’s in such situations “may” engage with shooters, but didn’t have a duty to do so.

U.S. District Judge Beth Bloom recently dismissed a lawsuit by survivors of the massacre that the 14th Amendment of the U.S. Constitution obligate the sheriff’s department and school district to protect students. While many of the public might disagree with the dismissal, the judge cited case law that the 14th Amendment applies to those in the custody of the state, such as prisoners, but doesn’t apply to students.

One should note, though, that a policy in a law enforcement agency is much different than constitutional law. After the shooting, Israel changed the policy to say that officers have to engage shooters.

That was the right move, but it undercuts Israel’s contention on CNN shortly after the shooting that he had “amazing leadership.” In doing that, Israel violated a cardinal rule in crisis management in any field, including business. When something bad happens on your watch, it should be all about empathy for the victims and the need for a full investigation. It’s not about how you or your organization really aren’t so bad.

The sheriff’s department had an opportunity to make sure everyone was well trained and organized, since there was a massive wakeup call in January 2017 when a shooter killed five people and wounded six others at Fort Lauderdale-Hollywood International Airport.

Issues, such as bungled radio systems, were still a problem a year later when the shooting happened in Parkland. Some of that is likely the fault of county bureaucracy, which seems to take forever to fix problems like this.

On a personal level, I found Israel to be likable and admirable when I interviewed him. He has the right to fight his removal, if it occurs, but one wonders if that’s really the better course of action. Even if he succeeds, it may be a hollow victory, given what has happened.

It’s sad to see Israel’s career come to such an ignominious end. It’s even sadder, though, to think about victims bleeding to death while members of the sheriff’s department didn’t rush into the school.

Does Israel share all the blame for the response? Undoubtedly, no. However, it’s good to remember the sign on President Harry Truman’s desk: “The buck stops here.”

Here is the original interview:

Broward County has had its share of colorful characters as sheriff.

In 1927, Sheriff Paul Bryan was arrested on federal bootlegging charges. Walter Clark served from 1933 to 1951, but admitted to the federal Kefauver Commission that he profited from illegal gambling.

Nick Navarro gained national attention in the 1980s by starring in the first season of “Cops” and having a crime lab that cooked up crack cocaine to use in stings.

Ken Jenne resigned in 2007 after pleading guilty to tax evasion and mail fraud.

So, there’s no wonder that current Sheriff Scott Israel has been under the media microscope since assuming office in 2013.

An ethics complaint said Israel should have declared a higher value for a trip his family took with campaign supporter Robert Pereira on his yacht.

The Florida Commission on Ethics didn’t take any action because Israel relied on advice from his attorney, who said $1,500 was equivalent to cruise ship pricing, and the sheriff lacked experience as an elected official.

Before the ethics commission ruled, Israel said, “Just the fact that some people looked at it a certain way … if I had it to do over again I wouldn’t have gone on the trip.”

Afterwards, he said, “If you have a problem with the valuation that was OK. I was in safe harbor because I acted according to what the attorney told me to do.”

Some other reports about Israel have been wildly inaccurate, including one that said he was in a luxury suite at the Super Bowl with Pereira when he was actually at a Sheriffs Association conference.

Going beyond the headlines and meeting Israel in person, one is struck by how the former college quarterback is a grown up version of the “All American Boy.” Israel and his wife Susan, who helps manage his packed schedule, have a busy family life with three triplets, Brett, Blake and Blair. Brett was the junior starting quarterback for Marjorie Stoneman Douglas High School, Blake was a midfielder for the lacrosse team and a safety on the football team and Blair was a sprinter on the track team before hurting her foot.

It’s not easy being the sheriff’s kid, Brett says, “You have to be on your best behavior.”

Susan Israel says her husband is a dedicated father and tells how he used to pack up the triplets and take them to the gym when they were infants so she could have a break.

“The girls would go, ‘My husband won’t even watch one. Does he have any brothers?”

The department controls just over half of the county’s $3.7 billion budget and has 6,000 members.

“It’s challenging, rewarding, it’s tough,” Israel says. “I don’t think anyone can anticipate the pace of being sheriff.”

There’s also the reality of getting called out of bed in the middle of the night if there’s a police involved shooting.

“It’s very important to me that I let the men and women know I care what happened,” Israel says.

Jeff Marano, president of the Broward Police Benevolent Association, said Israel always shows up if there’s a police involved shooting, which the PBA does as well.

“It’s a terrible thing to take a life, but with the current sheriff and the staff the shooters are treated with respect and not looked at like they did something wrong,” Marano said.

The PBA leader said he went to police academy with Israel 35 years ago and still describes him as a jock and an energetic individual.

“He has not changed one iota,” Marano said.

It’s tougher for Israel to work out now after having a spinal fusion eight years ago. While working for the Fort Lauderdale Police Department, a fleeing suspect knocked into him and they both fell down a flight of stairs.

Israel lost in his first run for sheriff’s office in 2008 against Republican Al Lamberti, who had been appointed by Gov. Charlie Crist to replace Jenne. Lamberti blasted Israel with negative campaign ads and some political observers credited political strategist Roger Stone with helping out.

Israel told 28 members of Lamberti’s staff that they would be dismissed if they didn’t resign and Lamberti authorized the payment of $4.3 million to 53 departing employees.

“The place kind of got gutted. Who knows what walked out the door,” Marano said.

Israel said Lamberti wouldn’t allow him access to the department during the eight weeks between the election and his assuming office, so he spent a lot of time thinking about intelligence led policing. He says 6 percent of the criminal element commits 69 percent of the violent crime.

Israel’s Violence Intervention Proactive Enforcement Response (VIPER) program works to execute more warrants and cultivate sources to take down that 6 percent. The program resulted in 400 arrests in nine months and overall violent crime is down 12.3 percent since Israel took office, he says.

The bottom line is that the Broward County Sheriffs Office exists for two reasons, Israel says. “One is to reduce crime and the other is to enhance the quality of life of the citizens of Broward County. I understand the power of the position, but I’m just an old fashioned street cop who wants to make the streets safe.”