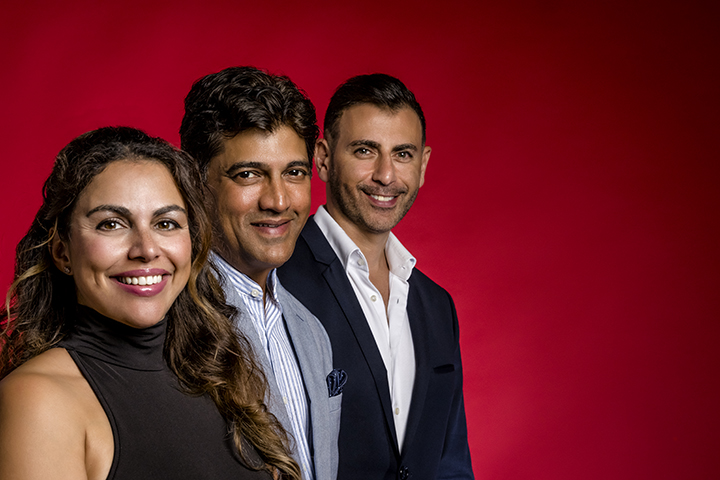 “Dr. Abhinav Gautam was one of the first people I met when I moved to Miami,” Christian Seale recalls. In 2015, the two were introduced by Dr. Narendra Kini, a board-certified pediatrician and the former CEO of Miami Children’s Hospital—now Nicklaus Children’s Hospital. (Kini and Seale have partnered on a variety of health care investments, and in 2016, they brought MIT’s Hacking Medicine to Miami—a two-day hackathon—to demonstrate their shared belief in Miami as an emerging hub of health care innovation.)

Once connected by Kini, Gautam and Seale quickly bonded over being born on the same day—a good omen. “I invested in Dr. Gautam’s last software business, which we sold last year,” Seale says, “and then one day he told me about this treatment he had developed to repair tissue from the inside out.”

Their conversation was more than theoretical for the athletic Seale. “I had recently sprained my wrist bracing myself as I fell off a trampoline,” he recalls, “so I went to see a doctor and they immobilized my wrist. I was extremely frustrated because I’m an active guy and I couldn’t even do a pushup. Dr. Gautam asked me why I had a wrist brace on, so I told him what had happened. He told me he could fix it. I have to admit I was nervous—I didn’t know what was going to happen, yet I felt after three months in a wrist brace, I didn’t have much to lose. Long story short, he fixed my wrist and four days later I could do pushups. That’s when we both had this ‘aha’ moment that led to our Relief treatment.”

In a nutshell, the purpose of the Relief modality, according to Gautam, is “to restore your damaged and scarred tissues to their normal (pre-injury) state, to free entrapped nerves from the surrounding fascia and get you back to your favorite activities without downtime, invasive surgery or steroids.” For those seeking a minimally invasive, holistic approach (who isn’t?) and want to avoid the sometimes debilitating effects of steroids and get back to the gym, the track or the tennis court, the appeal of Relief is obvious.

Along with their Sunset Harbour facility in Miami Beach (which lures a clientele from yogis to paddleballers to runners and golfers) and a satellite office in Palm Beach, Vitruvia also has a location in Los Angeles, and last summer saw a debut in New York. One thing is for certain: The COVID-19 pandemic has made Vitruvia’s brand of personalized, concierge-type service more in demand than ever.

Seale’s wrist injury was only one of several incidents that inspired him to become an investor in health care. “Three avoidable events related to health care pushed me to build and invest in companies that transform health and lives,” he says. “First, my grandmother passed away due to a misdiagnosis of ovarian cancer. Second, my dad lost sight in one eye after a transcription error post-cataract surgery wrongly sent him home without solving the infection. Third, I received a $17,300 bill after an emergency room visit in New York for a dislocated pinky—which was a stark contrast to the $53 bill I received in Barranquilla, Colombia, for a 24-hour emergency room stay.”

Miami’s startup culture and athletic environment proved attractive to the serial investor. “When I began investing, I had a vision that Miami represented such an amazing place to test and build health care products and services for what the United States will look like in 2050,” Seale says. “I’m grateful to have invested in more than thirty health-tech businesses—I sold seven—and to have met my co-founder and dear friend, Dr. Gautam, during the process.”

When Gautam describes his philosophy of healing, it’s easy to see why his approach was so seductive to Seale. “When I work with a patient, my first goal is to listen,” he explains. “Then I need to determine if I can reconcile their symptoms and/or suffering with the tissue patterns seen on ultrasound. The ‘tighter’ the match between their symptoms and imaging tissue patterns, the more confident we are that they will have a successful outcome.”

Gautam was able to get Seale doing pushups in just days, and he and his Vitruvia colleagues apply the same sense of efficiency throughout their practice. Miamians, after all, are not known for their patience. “The next step is to understand the patient’s goals, timeframe and budget,” Gautam says. “The goal is to provide as much benefit to the patient in the fewest number of treatment sessions. However, every patient is different, and chronic pain states can become interconnected, complex situations that require extensive work.”

For his part, Kini, who serves on Vitruvia’s scientific advisory board, is proud of his role as matchmaker. “Vitruvia,” he says, “is about making an impact on people’s lives by modulating core functions, using natural means. The results are immediate and there are virtually no side effects.” But Kini is quick to set realistic expectations. “The worst that can happen,” he says, “is that the treatment may not be as effective as one expected.” Still, he says, “The reason I joined is the world-class folks that are making it happen.”

“World-class” is not hyperbolic. Kini’s co-board members include physician Curtis Slipman, a global leader of back and neck pain; surgeon Scheffer C.G. Tseng, world-renowned in ocular surface reconstruction; and orthopedist Thomas Best, a professor of sports medicine at the University of Miami.

Best, who served as team physician for the Miami Marlins and University of Miami Hurricanes, was drawn to Vitruvia’s holistic approach to care for both weekend warriors and serious athletes. He says that Vitruvia caters to “individuals with not only everyday problems, but more importantly, those with challenging clinical conditions for which they have had minimal success in management using our current medical model. As a sports medicine physician dealing with individuals who want to remain or become more active, Vitruvia provides an alternative approach that is well grounded in emerging science and clinical outcomes, suggesting that people with chronic pain, for example, may not need to live that way.”

Even after a career of such accomplishment, Best’s ability to be surprised speaks volumes about Vitruvia’s innovative work: “It has been exciting to learn about anatomic structures such as the fascia and its role in a variety of challenging musculoskeletal conditions. As a member of the scientific advisory board, I am particularly pleased at the willingness of the team to try and understand why their approach works.”

Babak Movassaghi—Vitruvia’s CEO who was once captain of the German professional American football team—has a personal stake in the company’s therapeutics. “As a former professional athlete, I was dedicated to optimizing my performance,” he says. “I joined Vitruvia because I enjoy helping some of the best athletes and high performers in the world operate at their peak—reducing their pain, increase mobility, and maximizing performance.” Movassaghi is also an evangelist for the democratization of sports medicine: “I also joined because I believe Vitruvia’s approach and technique should be accessible to everyone,” he says.

Like Gautam, Movassaghi cites the fascia, which he says is “typically overlooked,” as the key to Vitruvia’s methodology. “We help heal a very important part of the musculoskeletal system that was only recently discovered, the fascia—a network of connective tissue that spans the entire body, surrounding and separating muscles, and creating biomechanical interfaces between them,” he says. “We work in this domain, providing incredible results. One might notice that some participants in a yoga class are more ‘flexible’ than others. The fascia plays a key role.”

He also emphasizes the role of ultrasound imaging to evaluate the pliability of soft tissue: “There have been huge advances made in ultrasound imaging in the past 10 years, particularly in terms of size, portability, and image quality,” Movassaghi says. “No one else is looking at soft tissue the way we are, thus we can incorporate machine learning and other computational algorithms to take what we are learning about soft tissue and deploy it across a much larger user-base. I believe we can provide a huge impact in the treatment of musculoskeletal issues.”

Anesthesiologist Aimee Kamat also became a believer in Gautam, leaving the comfort of a conventional career that included work at the University of Miami Hospital and Miami’s VA to join a fledgling business. She met, or rather, re-met, Gautam in a quintessentially Miami way: at Soho House on Miami Beach. “I hadn’t seen him in maybe a decade,” she says. “He used to be one of my residents.”

Still unsure if she had the right doctor, Kamat went up to him and said to him, “‘You have a full-on doppelgänger here in Miami,’ and the guy turned around and it was him.”

Kamat remembered her former resident well—as well as his ambition. “Even in residency, Abhi was always someone who looked ahead. In residency, you’re just studying anesthesia—living, breathing, eating it—nothing else. But he was already doing electronic medical record businesses, stuff that none of us would ever consider doing. He was always ahead of the curve.”

So, it was at Soho House the two doctors caught up, and Gautam told Kamat about his latest venture. She didn’t know what he was talking about. I have to see this, she thought. It didn’t make sense to her: “I only know medicine through formal medicine,” she says of her mindset then. “You cut open the body and you look at the organ, and that’s that. So, when I went and I saw what he was doing, I was gobsmacked, not only at the procedure, but at the way he was looking at pain. It wasn’t black-and-white, which life isn’t, especially medicine.”

Kamat explains that the fact she is half-Indian affords her a unique perspective—and an openness to the nontraditional. “Everything I do has some Eastern element in it that I can’t even explain,” she says. “If my kid is sick, I rub turmeric and oil on his belly and he gets better. This is why I was open to this. I saw what Abhi was doing—instant gratification, legit helping people. Anesthesia literally means the absence of pain, and he was literally doing that. So, I took a leap of faith, and I ended my academic career as assistant professor [since 2008, Kamat had been an assistant professor of anesthesiology at the University of Miami Miller School of Medicine] and I joined Abhi. I call what we do now bread and butter—the basics of removing pain—but I have no doubt that someday Abhi will cure things previously thought to be incurable.”

If that sounds idealistic, remember that Kamat saw something in Gautam years ago—something you can’t discern in an ultrasound. Something called vision.