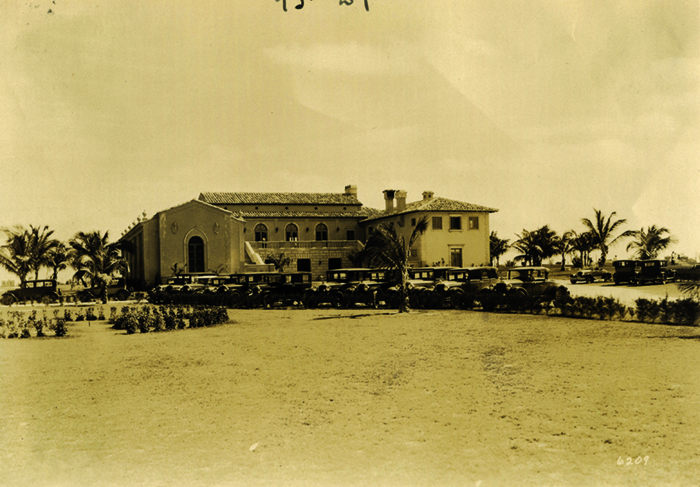 When you think about clubs in the Miami area, images of South Beach’s glamorous nightlife might come to mind. But there’s another type of club steeped in tradition that has the honor of being Miami’s first “club scene”—the country club.

Miami’s humble beginnings as mangrove country is a far cry from its current skyline. Originally thought of as prime farming land, John S. Collins soon realized the little barrier island known as Miami Beach would be better served as a winter getaway for the elites to the north. Collins, the namesake of Collins Avenue, thus became a land developer with help from his son and son-in-law. As they dredged up along the coast, other developers took notice, and Carl G. Fisher joined the force.

Within a decade, the millionaires were jazz-stepping down Florida’s southeast coast. And as big spenders migrated south for the winter, a new market opened up for exclusive first-class entertainment.

Developer George Merrick saw the opportunity and seized upon it. He met with the mogul behind the elegant Biltmore Hotel with the idea of adding more entertainment value in hopes of solidifying Miami as the “center of sports and fashion.” Biltmore Country Club opened in 1926. It boasted a championship golf course by renowned golf course architect Donald Ross, polo fields, tennis courts and a massive 150-by-225-foot swimming pool.

As more people came to Miami Beach to soak up the sun, more country clubs sprouted up along the beach. Two million cubic yards of Biscayne Bay were dug up, a three-year process that made way for the opening of La Gorce Country Club in 1927. La Gorce has been home to many well-known Miami residents, such as Joe DiMaggio, while famous golfers such as Sam Snead graced the greens.

Thus started the great tradition of glamorous Miami winters. It did not stop there, Bath Club, Surf Club and Indian Creek Country Club started societies of their own.

World War II turned many of these country clubs into training areas. The glitz, glamour and allure was gone. The Biltmore Country Club was now a military hospital while other country clubs nearly died out.

But a tradition so deeply rooted in the spirit of Miami was too strong to fan out so easily. The 1940s saw a resurgence in country clubs, spawning renovations to current country clubs and new clubs such as Riviera Country Club.

The clubs teamed with people, champagne flowed and the city thrived. Miami continued to grow and developed into an international epicenter. Country club memberships burgeoned.

The importance of country clubs in shaping Miami’s identity as the playground of the rich cannot be missed. It’s a tradition that is quintessential Miami. ↵

Information for this feature is courtesy of the HistoryMiami Archives & Research Center, which is open to the public and contains more than 1.5 million images of southeast Florida, the entire state and the Caribbean from 1883 to the present. For more information, visit historymiami.org.