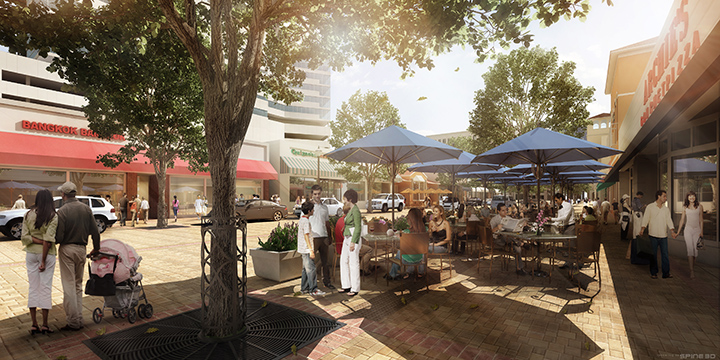 It seems just about every city in South Florida is trying to create a live/work/play neighborhood, but Coral Gables is getting ready to freshen up one of the first in the region, Miracle Mile.

The city’s Business Improvement District (BID) is moving ahead on a long-awaited $18.8 million streetscape improvement plan after getting a sign off from the city commission.

“Yes, Miracle Mile is that original Main Street,” says BID president Burton Hersh, who is also an architect. “It was first built in the early 1920s and soon will be a century old. During these 100 years there have been some improvements, but the streets have remained fundamentally the same.”

In an interview with SFBW, Hersh talked about the project and what it will mean for the future of Coral Gables.

What inspired this project?

The realization that if we didn’t do something we weren’t going to remain viable as a business district. In 2007 the BID board concluded that making improvements to the Miracle Mile as well as Giralda was necessary. At that time, South Miami was undertaking its improvement, Brickell was being built, and Miami Beach, downtown and Midtown were becoming a factor. The writing was on the wall.

What are some of the improvements that are going to take place?

When you look at like the great shopping streets of the world you conclude that there is a ratio, 50 percent of the street is vehicular and 50 percent is pedestrian. We are trying to get closer to that mix. It means that the sidewalks must be able to support multiple uses, such as window-shopping, circulation and caf” dining – all in a high quality environment.

Do you see examples of property owners doing improvement to tie in to the Streetscape changes?

Once the project is underway, we are expecting this to happen. What better time to rebrand, renovate and rebuild than while this project is being done on the streets.

Does the project somehow build on Coral Gables” history?

I think it does in the sense of just normal urban evolution. If you look at the roots of Coral Gables, historically it has always been on a very high level. The landscape is incredible, the quality of buildings is very high. Therefore, the materials that will be used will be of very high quality. You are going to see crosswalks that are works of art and granite curbs – just very high quality. An evolution of what it was.

This project has been your brainchild since 2007, why is it just now being approved?

It took that long to be approved. In 2007 the project became the BID’s top priority. We formed a committee, held workshops and did design alternatives. We vetted it out with all the other boards and went to a couple city managers.  It took seven years to do. But it’s done.

We are seeing a lot of foreign interest in Miami, is this part of what you want to attract in Miracle Mile?

Coral Gables is a big business venue. We have more consulates than any other city in Miami-Dade County. We attract a lot of foreign interest. We are minutes away from the airport and I do believe that this intervention that we are going to undertake will add to our attraction.

How are you going to minimize the impact to business owners during construction?

The construction will be done in pieces. Some of the impact will be minimized by nighttime work incorporated into the project.

Are numerous construction companies involved in the project? Who are they?

In a few weeks a request for qualifications will go out to interested parties. I would expect that nationally recognized firms would be interested in this project.

What are the beginning and end dates of the project?

In two years it should be completed.

How do you see Coral Gables in the next 5 years?

In the next five years, Coral Gables will be an amazing place. Not only will you have seen the streetscape project being completed, but you would have seen hotel projects come online. There is even a proposal on the table of developing the Old Spanish Village. [A concept introduced earlier this year called for 295,000 square feet of retail, 206,000 square feet of office space, an 184-room hotel and 234 residences.] With all the changes coming up there will be a tremendous growth in Coral Gables economically. ?

The city of Coral Gables is issuing a general obligation bond for the $18.8 million project in an area with 350 merchants. About 150 property owners in a 19-block area will pay back half the cost over a 20-year period. Elements of the plan include: