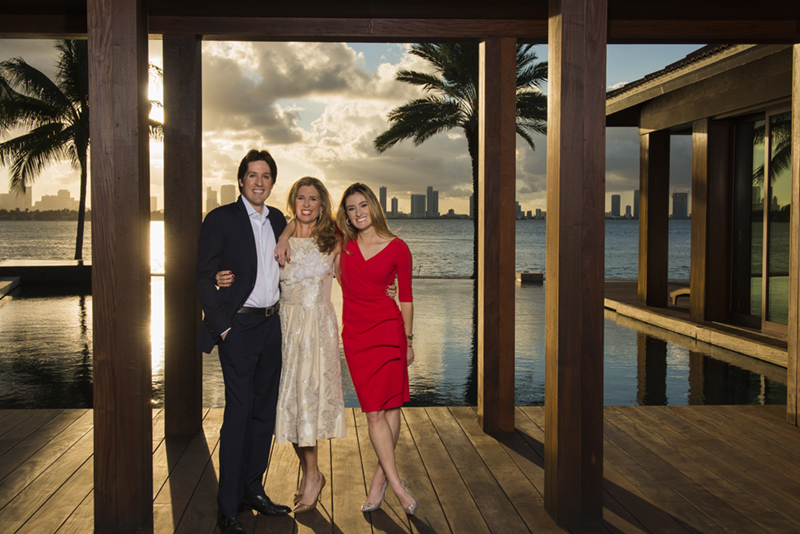 Female entrepreneurs build their businesses with the help of family

Whether she is head of the household or the boardroom, some moms juggle it all to grow thriving companies with the help of their kids. SFBW celebrates Mother’s Day with a look at three female entrepreneurs whose business success is a family affair.

A mother of four, Margarita Boland turned her knack for homemaking into a thriving business. The self-taught interior designer opened her first shop, Margaux Interiors, in 1988 in Miami.

“I’ve always loved beautiful homes and furniture,” Boland says. “I opened a country French store at Bayside. That was when downtown was just starting to change.”

Her kids were teenagers at the time and they would help around the shop during the summers. From that little retail shop, she eventually established a full-service interior design firm, serving clients in the South Florida region.

Her daughter, Cristina Courtney Boland, joined the company as a designer after graduating from arts school and working at New York City’s prestigious Bergdorf Goodman in the furniture department and at ABC Carpet & Home.

“My kids grew up the way I grew up—going shopping and going to antique shows. Cristina always worked for me during the summer, so by the time she had graduated from college, she had experience with the store. She worked in New York and she got trained very well,” she says.

Today the mom and daughter team design and co-own the company with a focus on high-end luxury with tropical flair. Boland’s niece works in the office and handles the day-to-day administration.

While running a business, sometimes working with family can get tricky. To keep a balance, Boland takes a hands-off approach. “I don’t ask my daughter a lot questions. I try to stay out of her personal life,” she says. “And we also try not to discuss business when are not in the store.”

The rewards of working together, which means plenty of global travel as the duo seeks design inspiration from the world over, is that she gets to see her daughter and grandchildren often. “And I think Cristina has become a great professional. She and her tastes have evolved tremendously,” Boland says.

Moreover, when business is kept in the family, it can become more meaningful.

Peace Love World founder Alina Villasante turned her passion for spreading good vibes into a global apparel success. She’s signed partnerships with the likes of Oprah Winfrey, the NBA and Pharrell Williams, and she hosts a show on QVC. She has a fan base of celebrities who sport her lifestyle brand, including the Kardashians, Jennifer Lopez, Britney Spears and Ellen DeGeneres. Her clothing line is known for its emblazoned affirmations (such as “I am Love”) and is composed of comfortable T-shirts, hoodies, pants and so forth for men, women, and children.

Headquartered in Doral, and established in 2008, Peace Love World now has eight stores and is sold in 2,000 stores worldwide. Her daughter, Mia, oversees the company’s social media and marketing. “She also helps me with design and is my right-hand,” Villasante says.

Peace Love World came about following the success of her living room parties.

“Once a year, a week after Valentine’s, I would put together a party called the Love Party and it was 50-something women,” she says. “When they came through the door, they basically had to change into whatever I made them, whether it was ‘I am love,’ ‘I am happiness,’ pajamas or T-shirts.”

Eventually, demand grew for her custom-made cutout shirts. She took her scissors and made a $50,000 investment. Without any distribution, people would line up at her Miami home to get their hands on one, she says.

“And that’s how it all began,” she says.

She opened her first store in Sunset with the help of her three kids. When her daughter Mia graduated from the University of Miami, Alina gave her the option to work elsewhere.

“I actually moved to New York for six months in 2014. We have a showroom there,” Mia says. “But I really missed being present in the business. It was hard not to be involved every single day. I had FOMO [fear of missing out]. I moved back quickly.”

Balancing being family members and colleagues isn’t always easy, but the rewards of building a legacy are worthwhile.

“We do bring the personal relationship inside the office. And I think you have to evolve to a place of professionalism, it’s not always easy but I wouldn’t want it any other way,” Alina says.

Adds Mia: “She is my role model. Everything that she does is very genuine. This vision, this mission of hers, comes from the heart. And I think that has made her successful and is what inspires me to be a part of it.”

Miami native Jill Hertzberg got into real estate following a retail career and the birth of her three children. Being a self-proclaimed “mama bear,” she was looking for a more flexible schedule to accommodate her family needs. As a result, her kids grew up having real estate as part of their lives.

“It was a language that they got used to,” Hertzberg says.

Nearly 25 years ago, while on the job, Hertzberg met Jill Eber, another sales agent, and that relationship led to a business partnership known today as The Jills, which is ranked as one of Florida’s top sales agencies in Miami’s luxury residential market. Their client roster includes many celebrities.

The company was recently named Coldwell Banker Residential Real Estate’s No. 1 large team in Florida. In 2016, the Jills closed on 72 properties, bringing in more than $250 million in sales. And the group of five—which includes two of Hertzberg’s children, Hillary and Danny, and Eber’s sister, Felise—snagged a Society of Excellence award for 2016 from Coldwell affiliate NRT. (The award is given to associates who meet certain sales criteria.)

While the Jills had already built a successful realty sales empire, having Danny and Hillary join the company brought a fresh perspective—an invaluable asset, Hertzberg says.

“While my son Danny was in law school, he said he wanted to work with me,” she says. “So when he came out of law school [about 10 years ago], he came full-force to our business. And the first thing he did, with his young eyes and young ideas, he revamped our website and our logos and cleaned it up to make it more ‘today.’ And, more important, he got into the SEO component.”

Hillary joined nearly five years ago, after working as a media buyer for a couple years in New York City.

“She came here and worked with Danny inside the Jills and just loved it. And they have been the best thing that has ever happened to me in my life,” she says.

The two siblings formed their own company within the Jills, called Second Generation Selling, and have their own staff working for them. They took the lessons from their mother and combined it with their native digital expertise. They developed a multimedia marketing approach with cinematic videos to showcase properties, reaching a global audience. This was a step beyond traditional print advertising, which the industry has used for decades.

“The world changes, and the way people view properties has changed,” she says. “It was like the sun, and moon and stars lined up that they should enter our universe, when we needed their education and their knowledge of what they understood, because we understood print and they understood digital.”

She describes the working dynamic as old school meets new school. And she attributes their collective success to trust and hard work. “I think there’s 1 million percent trust and love. So, I think from that … listen, if they weren’t the kind of kids they are, they wouldn’t make it in here,” she says.

While working fulltime, Hillary is enrolled in the University of Miami’s executive MBA program. And Danny was on Forbes magazine’s 30 under 30 list in 2011.

When asked what it’s like working with family—and she also considers her counterpart, Jill Eber, to be family—she says, “I think if you can do it, it’s magic.” ↵