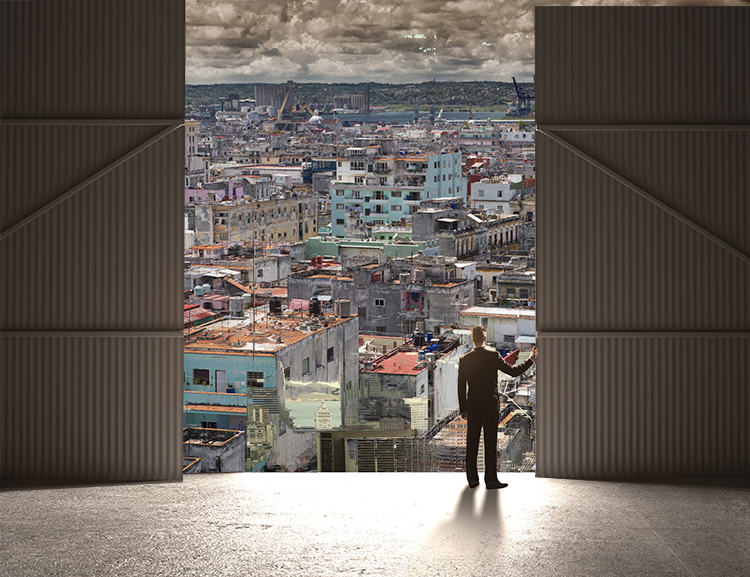 Opening the doors to Cuba

between Algeria and Macedonia

followed by Tunisia, Thailand and China

unofficial estimates are about double

About 10 percent of the population has cell phones, which is the same rate for land lines; special authorization is needed to own a personal computer and access the internet

Months before the Obama Administration announced the normalization of U.S.-Cuban relations, about 30 people from South Florida, Tampa and other parts of the state chartered a plane and landed on Cuban soil.

Their goal was to learn more about Cuba, its people, its culture, its idiosyncrasies, its infrastructure and growing entrepreneurial spirit. Some of those on the plane were real estate developers, others were in the tourism industry and others were long-time students of what might happen in a post-embargo Cuba.

The four-day trip in July 2014 underlines Florida’s growing interest in doing business with Cuba. But before anyone jumps to do so, there are some challenges that entrepreneurs will need to consider.

“I’ve been to Cuba twice, once in 2000 and recently,” says F. Thomas Godart, who took part in the July trip as Managing Director of Godart Florida Real Estate Investments. “But I don’t see Cuba opening up to U.S. real estate companies anytime soon. Downtown Havana is ripe for redevelopment and most of the buildings are in such a state of disrepair that they look like they are ready to collapse. However, I believe the Cuban government intentionally are keeping their people poor and hungry so that they have control. Therefore, they are in no rush to improve their living conditions.”

The recent Obama administration policy change seeks to open business opportunities for U.S. companies in Cuba. For example, it will make it easier for Americans to provide business training for private Cuban businesses and small farmers and provide other support for the growth of Cuba’s nascent private sector, according to the White House announcement.

The private, or non-state, sector is small, limited and fledgling, but is a growing part of the Cuban economy, says Jorge Duany, director of the Cuban Research Institute at Florida International University in Miami.

“It consists primarily of about half a million self-employed workers, especially in retail trade, tourist-oriented services and agriculture,” he says.

The new policy also allows new exports, including construction materials to build private homes, goods for use by private entrepreneurs and agricultural equipment for small farmers.

“South Florida businesses in the transportation, telecommunications, banking and agricultural industries should benefit from the expanded opportunities for trade and travel with Cuba,” Duany says. “South Florida’s economy is already strongly connected to Cuban-American travel, remittances, telephone calls, and other transnational links with Cuba.”

Yet, for as long as the U.S. embargo of Cuba remains in place, it will be very difficult for U.S. companies to conduct commercial transactions with the island, Duany says.

“In addition, Cuba’s current designation as a state sponsor of terrorism, which the president has asked to review, restricts a broad range of trade and financial activities.”

Most importantly, U.S. businesses, especially in areas like South Florida and Tampa, may be reluctant to enter the Cuban market because of political pressures from some members of the Cuban-American community, he adds.

While some U.S. businesses will undoubtedly seize the opportunity to trade with Cuba – as it represents a new and potentially lucrative market – some U.S. investors do not necessarily trust that the Cuban government will respect the interests of foreign corporations on the island, Duany says.

Embassy is a game changer

But that may change in the near future. The fact the policy change will allow a U.S. embassy in Cuba is a great boost for U.S. businesses, says Albert A. Fox, president of the Alliance for Responsible Cuba Policy Foundation in Tampa.

“When you have full diplomatic relations in the form of an embassy, both governments understand that when their citizens sign a contract, that contract can’t be reneged,” says Fox, who helped organize the trip to Cuba in July.

Fox says many international companies have being doing business in Cuba for decades and haven’t had a negative experience.

“Why are they still there? – are they stupid people?” he asks rhetorically. “They are there because they are doing very well.”

Doing business in Cuba will require U.S. companies to do their homework before venturing into the island. For example, Cuban importers like to do business with companies that have been in business for more than five years and have some experience dealing with foreign markets, according to the Canadian Embassy in Cuba.

“Cuban state importers are instructed to avoid dealing with intermediaries wherever possible and deal instead directly with actual manufacturers and decision-makers to minimize import costs,” according to the embassy.

Foreign companies seeking to sell their products in Cuba cannot set up a representative office as they might in most other countries. Instead, they might need to create joint ventures, which requires government approval, according to the embassy.