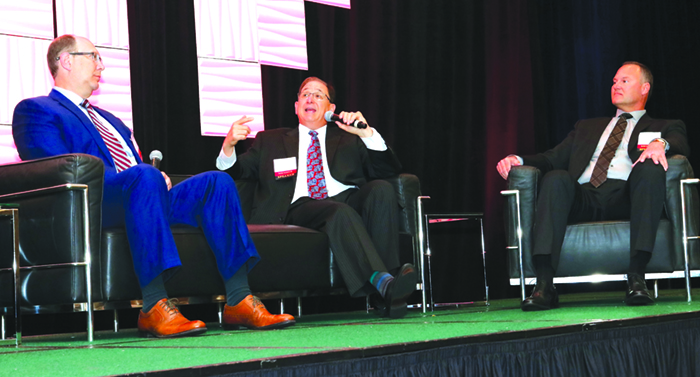 State of the Markets

Just in time for the turn of the year, real estate services company NAI Global held its Florida Forum at Jungle Island. One panel talked about the South Florida market, where the Miami condominium market is cooling, while another talked about conditions in Latin America and the Caribbean, where there has been political turmoil and financial crisis. Here are some highlights of the Q&A sessions, which have been edited for clarity and brevity.

The panel had a trio of experts, representing each of the region’s three counties:

Jordan Paul is CEO of NAI/Merin Hunter Codman, which is based in West Palm Beach.

What are the pluses, minuses, threats and opportunities in the overall market?

Paul: Right now is probably the glory days for Palm Beach County. There is a tremendous amount of new residential construction. A lot of major homebuilders that bought a lot of land at great prices during the downturn are starting major planned communities.

The county is very attractive for financial firms, hedge funds and money managers. It has developed an interesting bioscience cluster. United Technologies is breaking ground on its Center for Intelligent Buildings, which includes its Carrier and Otis divisions.

Kurtz: Broward doesn’t have much developable land available. One 11-acre site on the ocean will probably go for $35 million. The economy is driven by tourism, construction and the marine industry.

Larkin: Miami has become an economic hub for the region. The drivers are distribution, the cruise industry, and being the hub and capital of Latin America and Caribbean. There are a lot of headquarters operations and construction cranes. We can expect another migration of wealth and very wealthy Venezuelans and Brazilians to Miami for a better lifestyle and economic opportunity.

South Florida tends to be a leading indicator of the economy nationally. Where are we in the cycle?

Larkin: The bust cycle is coming in Miami-Dade. We will see some astronomically depressing data coming up. The information we are talking about today won’t show up until April.

Sunny Isles Beach is probably building 20 times more product than it needs and some buyers are not able to close on their purchase of units. Most South Americans are suffering because of business back home or currency issues. Because of devaluations, they sometimes have to come up with 100 percent of the purchase price in their currency even if they put down 50 percent.

If they get half their deposit back, many are happy to sell. I know someone who had a $2 million deposit and would take $600,000 to get out of the contract. It’s not just Sunny Isles but the downtown and Brickell markets.

The industrial market is slowing down. The expansion of the Panama Canal hasn’t kicked in as much as expected. Global economic activity has slowed. Office is stable, but expect a decline, along with retail.

It has gotten expensive to come to Miami. Tourism is dropping off and [the] Zika [virus] is having an impact. I expect to see vacancies to start sliding up.

Kiernan Conway, senior vice president credit risk management for SunTrust Banks, says Florida has many of the nation’s best-performing metropolitan areas and can take advantage of a shift in logistics from the U.S. West Coast to the East Coast

Paul: It has been a very good year in terms of underlying fundamentals. For several years, we have seen asset values race along and really peak based on a lot of capital in real estate investment trusts. This year [2016] has been a lot closer to reasonable and sustainable equilibrium. We saw the underlying strength of the market improve. Vacancy rates are down for offices from 12 to 14 percent. Some submarkets are even in single digits.

Rental rates are up 15 to 20 percent over the past 12 months. We saw asset values coming down at the beginning of 2016 due to uncertainly in capital and lending markets, but then it started to seem very healthy with more reasonable prices.

Palm Beach County is not driven by Latin America in residential, and demand has been pent up.

Larkin: If you are wanting to buy distressed condos, wait six to 12 months. Invest now in conservative cheap debt or buy an income-producing apartment building in Little Havana and Allapattah. You will see fairly rapid appreciation if you buy in the next corridor to get hot.

Kurtz: If I was an owner, I would be looking to refinance and lock in rates long-term, or sell and take advantage of low-cap rates. Interest rates may increase. If you are looking for a $500,000 investment, I would look at multi-bay industrial. It has an all-time low vacancy rate of 4.7 percent. There are good increases in rental rates for industrial (7 percent cap rates) and the returns are better than office (6.5) and multifamily and retail (5).

If you have $20 million, I would probably look at one of the few vacant parcels, which have a lot of upside, or shopping centers.

Paul: I would leverage to take advantage of interest rates, which I think will go up. You just can’t count on interest rates being like this. With interest rates where they are and given positive absorption, I have seen some opportunities with office buildings where you can buy at prices well below replacement costs. Rental property can be good solid investments if you can lock in interest rates.

In areas with new housing, we are seeing retail come in and a lot of demand. There are some tight vacancy rates. We will need to bring services to some of the more remote areas in the county where development is taking place.

The panelists for Latin America were:

Roberts: The market has been flat in the Bahamas, with activity in the higher end of residential. The commercial market is very small. Most Class A offices are tenanted by offshore banks. Many have moved or downsized. There have been no new Class A buildings in the last four or five years.

There are two major investments on the horizon. One is a hotel in the Grand Bahamas, which is apparently being sold. The other is, the Chinese have made a proposal to invest more than $2 billion in the forestry, fishing and farming industry in the Bahamas. I would say that has received a very lukewarm reception.

Hurst: We are choosing partners for development. Dart Group has heavily invested in the Cayman Islands. There are new town centers and the new 266-room Kimpton Seafire Resort & Spa.

Oliveras Fernandez: Puerto Rico is experiencing heavy incoming foreign investment. Some properties selling for 30 to 40 percent on the dollar are second-generation boutique hotels. There are incentives for new property owners, but that hasn’t caused a critical effect on inventory.

Sarmiento: With the tax amnesty that Argentina is doing and Brazil just finished, we expect more investment flows.

Capital groups have to be more aggressive to get good cap rates. Cap rates could be double figures in some areas of Latin America. The opportunity funds are first, but private money seeking returns leads me to expect more investments are coming.

Roberts: We have seen an inflow in residential investment, especially in Abaco, Grand Bahama and Eleuthera. A lot of Florida yacht people have bought homes in the islands. We don’t see any real commercial investment.

Oliveras Fernandez: A handful of Puerto Rican investors are investing in the states and other markets where properties that have a decent cap rate. Act 20/22 incentives in Puerto Rico have tax relief for foreign investors. Billionaire John Paulson and some other investors are buying property like there is no tomorrow. Foreign investors don’t have to pay capital gains taxes.

Are other corporations making investments?

Oliveras Fernandez: Lufthansa Technik has started a repair, maintenance and overhaul operation in Puerto Rico that has generated 350 jobs. The Mall of San Juan, which is a Taubman property, has opened.

Sarmiento: Previous governments were not friendly with foreign corporations, but we had examples like J.P. Morgan setting up a service center and hiring 3,000. I think corporations will be coming more aggressively. It’s a good place to service clients.

Hurst: The Caymans are the hedge fund capital of the world. We are seeing smaller family offices opening up and trust companies. I am seeing Cayman as a potential place for investment in Cuba, which is only 30 minutes by plane with daily flights.

Roberts: We rely first on tourism and then financial services. Small private banks and wealth managers seems to be the trend. Large companies, such as UBS and Credit Suisse, have downsized tremendously.

The Bahamas have various incentives. One is the Hotels Encouragement Act. You can build a hotel and all the materials come in duty-free. Import duties can be 25 percent of costs without the Encouragement act. The City of Nassau [Revitalization] Act offers similar concessions to developers.

If I have $1 million and want to buy in your country, what would I buy? What if I have $20 million?

Oliveras Fernandez: You will find a lot of second-generation properties for a little over $20 million. For $1 million, I would look at land near the capital for redevelopment. Construction is so inexpensive in Puerto Rico that you can redevelop.

Roberts: For $1 million, I couldn’t help on the commercial side. For residential, you could get a beautiful beachfront penthouse. I just closed yesterday on a large commercial property, the UBS complex, for just under $18 million. We don’t have many of those available. But for $20 million, I could sell you a developed private island.