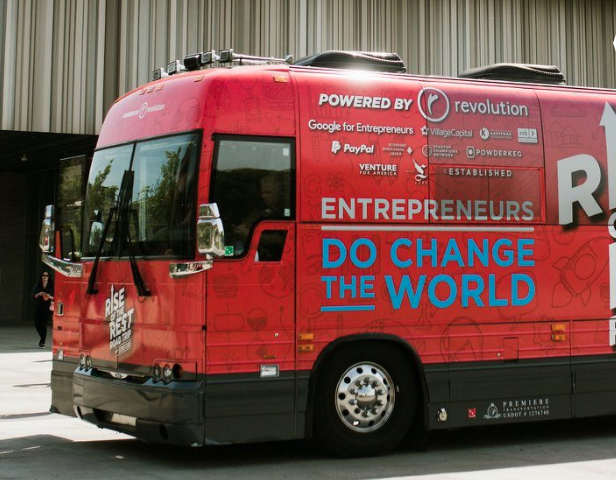 Rise of the Rest coming to Miami

Revolution says it is visiting a Miami since it’s “a hotbed of entrepreneurship and in 2017 The Kauffman Foundation ranked it the national leader in startup activity. The diverse city also “serves as a gateway for U.S. companies trying to break into Latin America or for LATAM companies looking to establish U.S. roots.”

Startups can apply to pitch for a $100,000 investment from the Rise of the Rest Seed Fund during the tour’s stop, but first need to submit an application by March 11.

The four-day leg of the ongoing national tour will also stop in Orlando, the Tampa Bay area, the Space Coast and Puerto Rico. The quest of the tour is to find quality startups beyond stereotypical locations like Silicon Valley, Austin and Boston.

The tour marks the first time that a Rise of the Rest trip has spent the majority of the tour in a single state and the first time it has visited a U.S. territory, a press release said. Among the sectors spotlighted by the group in Florida are hospitality, space technology and real estate.

“Every election cycle Florida is in the national spotlight for what the state’s votes say about the future of the country, but we believe the focus should also be on the state’s entrepreneurial communities and the companies that will drive our nation forward,” said Case, chairman and CEO of Revolution. “Startups are responsible for nearly all net new job creation and with Florida’s size and diversity, the state can help lead the way.”

“We’ve witnessed the potential for startup ecosystems to transform local economies and are excited to get to know the innovation communities in Florida and Puerto Rico,” said Vance, Managing Partner of Revolution’s Rise of the Rest Seed Fund. “In Florida, we look forward to learning more about how cities are innovating traditional industries and how local startup champions are working across the state to welcome entrepreneurs. … While we have 21 investments in the Southeast in our Rise of the Rest Seed Fund portfolio, only two are in Florida. We look forward to adding five more innovative companies from Florida and Puerto Rico to the portfolio.”

“We are 100 percent invested in Puerto Rico, not just in moments of extreme need, like directly after Hurricane Maria, but for the long term as they rebuild the island and its economy,” said José Andrés, President and Founder of ThinkFoodGroup and Chairman of World Central Kitchen. “To me, building a future where every Puerto Rican can access the benefits of technology and innovation is essential to this effort. I am excited to go with Steve Case and Revolution to see how we can continue to support startups and other projects on the island.”

Revolution’s Rise of the Rest Seed Fund is a $150 million fund launched in December 2018 Case and Vance and backed by a group of iconic entrepreneurs, executives and investors including Ray Dalio, Meg Whitman, Jeff Bezos, Eric Schmidt, and Sarah Blakely.

National partners on this tour already include Silicon Valley Bank, who will support and help judge the pitch competitions and Google for Startups, who will provide professional pitch coaching services for all of the pitch competition finalists as well as amplify the stories of the entrepreneurs we meet on tour.