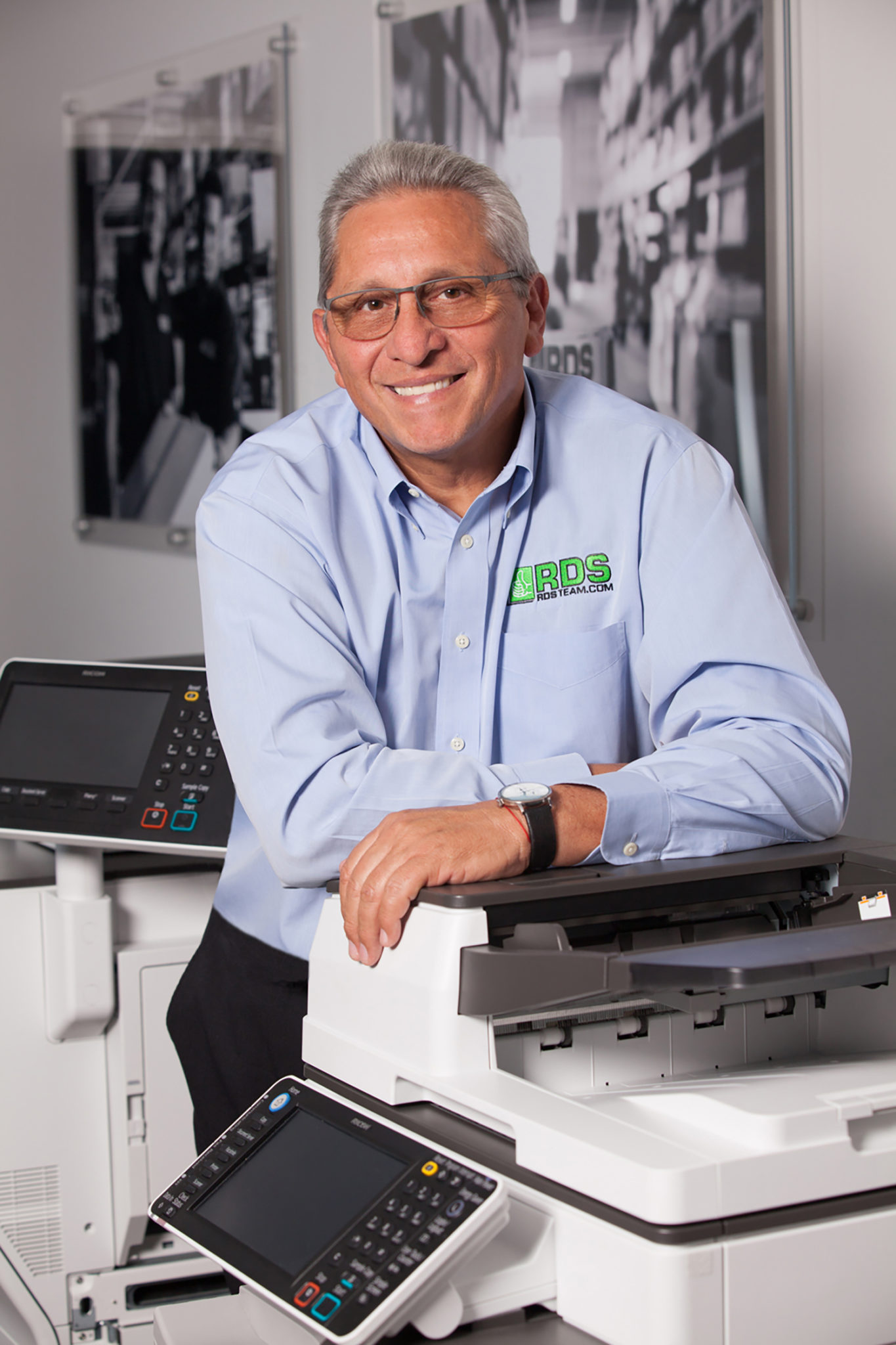 The Backstory at RDS

Gustavo Hermida had 25 years of experience in the copy machine, printer and imaging field, but by 2010 he had endured enough of the Great Recession. As director of sales for a business technology company, he was finding banks weren’t lending to customers who needed equipment.

Hermida had long-time relationships with finance companies and thought in-house leasing could be an advantage for a new company. He was 52 and always wanted to have his own business, so he cashed in his 401(k) and bootstrapped Restore Digital Solutions, later rebranded to just RDS.

Hermida gives much of the credit to his wife, Maxine, for being very supportive. “She always had confidence in me, no matter what I did,” he says.

Hermida had experience in lease financing while working with AT&T Capital Latin America and had decades of sales management experience at Ricoh Americas Corp., NUR Macroprinters and Delta Business Solutions.

Hermida grew up in the Argentine countryside and moved to the United States to study at Rockland Community College. His first job was selling copiers in New York City and he turned into one of its top salespeople, and then ran a sales team in the Wall Street area. He also worked for two distributors.

“I was always getting a better offer. When you are successful in sales, everyone wants you,” he said.

A job with Icon led to his arrival in South Florida, and then he was recruited as head of sales for AT&T Capital Latin America, which worked on behalf of vendors. Lucent, NCR and Dell were clients. Hermida’s arm of AT&T was spun off and owned by Nomura, New Corporate Capital of Canada and then CIT. He later became vice president of sales for NUR Macroprinters, which sold wide printing machines used to make billboards. Just before RDS, he was director of sales at Delta Business Solutions.

At RDS, Hermida’s sales and marketing skills have been complemented by company president Mike Martin’s technical skills. Martin started as a technician in 1982 and became a top technical field trainer.

RDS’s featured brands include Ricoh, Savin, Hewlett Packard and Brother, and it has offices in Miami, Fort Lauderdale and Orlando.

As RDS was launched, Hermida found lenders had plenty of machines they wanted to get off their hands as businesses downsized during the recession. RDS negotiated to buy them and then reconditioned them for sale or lease.

By the time RDS was selected in 2014 to participate in Goldman Sachs 10,000 Small Businesses mentoring program, revenue had grown to $850,000.

RDS bought A1 Printer Repairs In 2015 to round out its business. Over the next three years, RDS grew 294 percent to reach $3.2 million in revenue.

As the end of 2019 approached, Hermida was expecting $6.5 million in revenue.

Hermida said his background working for big companies helped him learn what to do and what not to do when it comes to satisfying customers. For example, one former employer would rather send a technician from Japan rather than exchange a machine. “If a machine is not performing well, we’ll either fix it or replace it,” he says.

The company also likes to empower its technicians, which not only provides better service to customers but makes the technicians feel more valued, he says. That helps with retention as well.

Perhaps the most astounding evidence of Hermida’s approach is a 5 out of five stars rating from Google with 126 reviews.

The reviews are populated with effusive words and phrases, including “second to none,” “outstanding,” “awesome” and “terrific.”

Hermida says he never asked for five-star reviews. He just asked for reviews and they turned out to be five-star.

Another strategy in the business is realizing how consumers are more educated these days, he says. In the early days, the customer knew about 30 percent of the information and 70 percent came from the salesperson, he said. With the internet making research so simple, that has flipped.

“We try to make it very simple in terms of being straightforward with answers and explaining to the customer, ‘Yes, this is a machine and technology, but it’s about the customer service you are going to get after that,’ ” he says.

Indeed, the Google reviews are effusive about how quickly RDS techs show up.

RDS is in a rapidly changing industry. There’s more information to distribute and customers need to think about not just printing less to control costs, but the most efficient processes. RDS Central provides cloud solutions to customers and the company also has expanded into the voice-over-internet-protocol field with telephone service.

RDS has more than 2,000 clients for its sales, service and leasing business. It also wholesales parts and sells parts on eBay and Amazon. Hermida says RDS has been able to find niches that allow the company to be highly competitive.

RDS has become more efficient because online support can resolve a lot of problems along with remotely connecting to machines, he says.

With the cloud, RDS can tailor to customer needs and secure documents. One new program allows accounts-receivable submissions to be scanned and uploaded to Quick Books, so data doesn’t have to be entered by hand.

Ricoh also has added smart whiteboards that can connect geographically separated participants. Robotics are also in the works, so his business will continue to evolve.

Hermida says he feels fortunate and gives thanks for his company’s success.

“I look up all the time and give thanks for my blessings,” he says. “If you do good, good will come back.”♦