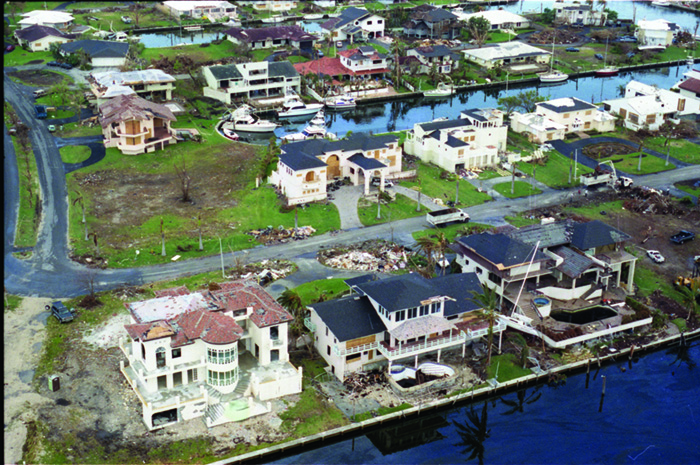 Weather experts say it’s simply a matter of when, and not if. South Floridians someday will find themselves staring into the literal eye of a monster as a huge, potentially catastrophic hurricane makes landfall.

We’ve been fortunate the past 10 years. The last time a hurricane struck South Florida was October 2005, when Hurricane Wilma made landfall near Naples as a category 3 storm and churned east across the southern portion of the state, two days after ravaging Mexico’s Yucatan Peninsula.

Historically, South Florida is no stranger to major hurricanes like Wilma.

Hurricane Andrew brought 175 mph (category 5) winds ashore in Homestead in August 1992. The damage was catastrophic, but it could have been much worse: At one point Andrew was projected to hit near the Miami-Dade/Broward county line. Instead, it hit on the southern end of the metro area.

One worrisome scenario would be a repeat of the 1926 Great Miami Hurricane (category 4), which carved a path of destruction throughout Miami-Dade, Broward and Palm Beach counties resulting in at least 350 deaths and $105 million in damages. Many deaths occurred around Lake Okeechobee when the winds swept water over the dikes and into surrounding rural communities.

That storm’s path took the eye directly over Miami, resulting in massive structural damage and a 10- to 15-foot storm surge. It’s estimated if a similar storm struck South Florida today, we would incur at least $100 billion in damages.

A repeat of that hurricane would create $43 billion in insurance losses, not counting deductibles, says Florida International University professor Shahid Hamid, chair of the school’s Department of Finance. He leads the development and operation of the Florida Public Insurance Loss Model, which forecasts the insurance losses caused by hurricanes.

With deductibles subtracted, the cost to insurance companies would be reduced to $36 to $38 billion. “The total economic loss would be two to three times that,” Hamid says. “That would include damage to infrastructure.”

Experts say the most horrific scenario would be a major hurricane striking the coast of Miami-Dade County, turning north and then hugging the coastline of both Broward and Palm Beach counties. “That’s our worst nightmare,” Hamid says, “but the chance of that happening is low.”

Should that scenario come to fruition, insurance losses without deductibles could reach $150 billion. Hamid points out the insurance-loss models are based only on wind damage and don’t include losses from flooding. Flood insurance is obtained through the federal government.

The case for flood insurance

“Everyone living in South Florida should consider buying flood insurance, whether or not they’re required to have it,” says Erik Salna, associate director of FIU’s International Hurricane Research Center.

In the event of a hurricane, there would be two sources of flooding: coastal storm surges and torrential rainfall inland.

Severe wind and flood damage are a fact of life with any hurricane hitting land. However, the loss of life would be less today than in the past because of technology and an increasingly accurate forecasting ability, experts say.

“Storms don’t sneak up on us anymore,” Salna says. “Emergency management would have time to evacuate. They need two or three days’ lead time.”

Salna says getting some people to evacuate is never easy. “How many will evacuate?” he asks. “The bottom line is if you live in an evacuation zone, you should evacuate. End of story.”

Inland waterways have been known to flood as well in major hurricanes, Salna says. Rivers can overrun their banks as the ocean’s storm surge flows into them. The biggest killer in a hurricane is the storm surge.

“Fifty percent of the lives we lose in a hurricane is due to the storm surge,” says Brian Zachry, a National Hurricane Center storm surge specialist. This season – for the first time – the NHC is issuing color-coded prediction maps to advise those in danger to evacuate. “If people can see on a map that they’re going to be underwater, they might heed the warnings,” Zachry says. “Our technology has gotten so much better, we can create these products.”

When storm surge forecast maps are drawn, Zachry says, they run between 500 and 1,000 different scenarios. “Every possibility is built into that,” he says. “Our new products not only show how high the water will get, but how far inland it will go.”

The 1926 hurricane caused a 10- to 15-foot surge, leading to massive flooding and structural damage. (For comparison, Hurricane Andrew created a 17-foot surge.) When it struck an unprepared South Florida, there were two phases to the death and destruction.

First, many lives were lost; people were trapped by the onslaught of water and wind when the eye passed, says Paul George, a noted South Florida historian and a history professor at Miami-Dade College. Then, because many Miami residents at the time were new to the area and had never experienced a hurricane before, many left the safety of their homes and ventured outside, unaware the dangerous second half of the storm was still to come.

“In 1926, we weren’t prepared,” he said. The region still wasn’t in 1928 when another hurricane made landfall in Palm Beach County and killed more than 2,500 people in and around Lake Okeechobee.

He points out even in the case of Hurricane Andrew, which hit six decades later, forecasters knew it was coming, but didn’t have a precise idea exactly where it was going to hit. “I think if we had a better idea, we would’ve evacuated more people,” George says.

If a hurricane approaches South Florida, the South Florida Water Management District immediately institutes measures to lessen the threat of inland flooding. “The first thing to do is to communicate with all drainage and flood control districts,” says SFWMD spokesman Randy Smith. “We would coordinate a pre-storm drawdown to handle a lot of runoff. The primary purpose of this agency is flood control.”

A drawdown refers to draining existing bodies of water to the ocean in order to lower the levels. “You can accomplish a lot of flood control with this system,” Smith says. However, no system is perfect. “You never can guarantee there won’t be flooding,” he says. “We still have very low-lying areas without a good system.”

Lowering the water levels will allow for some runoff from secondary systems, but some waterways can become clogged from uprooted trees and other storm debris. Overall, Smith expects the drainage systems will function adequately in the suburban areas. In the event of a storm surge, the district also can close coastal flood gates on some canals and rivers.

In the aftermath of a damaging hurricane, countless insurance claims will be filed for property damage. Michael Lyons, CEO of Weston Insurance Company in Coral Gables, is optimistic the insurance industry will be able to honor its obligations. Weston Insurance is a member of the Florida Property & Casualty Association.

“I can’t speak for everyone else, but we can handle it,” Lyons says. He says insurance companies purchase billions of dollars in reinsurance – a shared-risk arrangement – from other companies around the world just in case the big one hits. “We buy a little more than $1.2 billion in reinsurance,” he says. “We try to buy the right amount. The risk gets spread around the world to people you don’t think would be involved with the hurricane risk in Florida.”

Lyons says the insurance industry looks at models of the 1926 hurricane with particular concern. “That was the worst,” he says. “The worst part of the storm, the top-right quadrant, went right across Miami Beach and downtown Miami. It was a high category-4 storm. Even back then that area had a high population density.” ↵