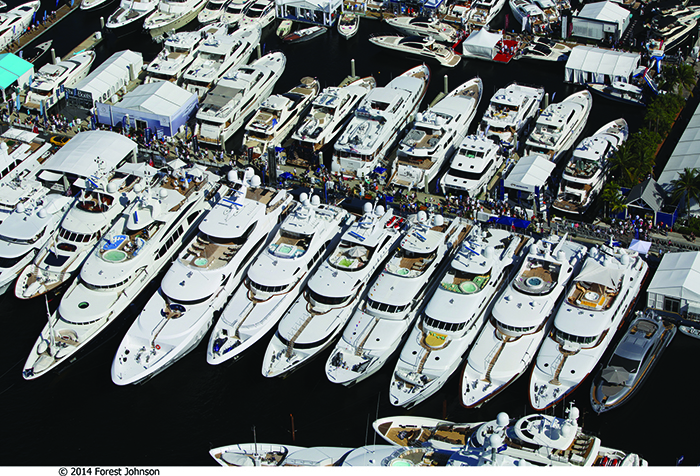 There was a lot more than boats surrounding this year’s Fort Lauderdale International Boat Show. In a whirlwind 24 hours: I checked out an exclusive ultra-luxury launch party at Banyan Air Service; learned about major upcoming marine projects at a media kickoff event; walked the show; and attended a hedge fund seminar. Here’s how it unfolded.

The boat show begins at Banyan

A boat show kickoff party at Fort Lauderdale Executive Airport (FXE) might seem out of place, but aviation and yachts go hand in hand, says Kimberly Gonzales, CEO of Platinum Connections, who organized the event. In other words, yacht owners and yacht buyers weren’t using Spirit Airlines” $9 Fare Club to get to Fort Lauderdale.

Banyan Air Services, which hosted the Nov. 4 Tapas on the Tarmac party (featuring food from Jet Runway Cafe, NYY Steakhouse at the Seminole Casino Coconut Creek and Kuro at the Seminole Hard Rock Hotel & Casino), had its busiest day of the year on that first day of the boat show, Gonzales says.

An estimated 1,000 private aircraft flew in to South Florida airports for the occasion.

I had a chance to chat with Banyan owner Don Campion, who grew up as the son of missionaries in Nigeria and flew on small aircraft to school. Campion started Banyan 36 years ago after serving as a co-pilot for a charter service and realizing a need for a maintenance base at FXE. Now, Banyan has 1 million square feet of hangar space on 85 acres at the airport. It has a lobby like a luxury hotel with a two-story ceiling, paddle fans, wood trims, tropical foliage and an octagonal saltwater fish tank.

Gonzales, who has a background as a pilot, yacht owner and jet owner, told me after the show that Banyan’s initial idea for the kickoff party was for something intimate, but she found sponsors and turned it into an event that raised $15,000 for 4KidsNow. Fonda Huizenga took the stage to talk about how the charity takes in kids in crisis who may have nothing but a garbage bag of possessions in their hands.

Numerous aircraft were on display at the event, including the new two-engine HondaJet, which is in the process of getting its certifications before it goes on sale for over $4 million. The jet’s engines are mounted on struts above the wings, which Honda says will make it faster than its competitors at 483 mph. Banyan’s Andy Joran will be the sales manager for HondaJet’s eight-state Southeast territory.

BurgerFi’s 52-foot Marine Technology Inc. tri-catamaran made a huge splash on the tarmac, since it was dramatically lit and tilted on its side aboard a flatbed truck. The BurgerFi Gulfstream G4 was parked nearby; it has seats that convert into sleeping space for six. John Rosatti, founder of North Palm Beach-based BurgerFi, is a prominent yacht and fast-boat owner. A Web search shows some of the MTI
tri-cats have hit 200 mph.

Other highlights included the Bell 407 helicopter parked outside and the Embraer Phenom 300 inside the terminal. Perhaps the most picturesque aircraft was the turboprop Kodiak seaplane, which can cruise at 339 mph.

The next morning, I trekked over to the boat show’s media breakfast, which featured updates on the marine industry.

Danielle Butler Treglia, a partner with Luxury Law Group and president of the Marine Industries Association of South Florida (MIASF), said she reached out to 100 businesses to ask about the direct impact of the boat show. She learned that a downtown Fort Lauderdale wine shop was sold out of Dom P�rignon Champagne; a spa on 17th Street Causeway was booked 10 days solid for pedicures; and a hotel 5 miles from the beach was fully booked.

Efrem “Skip” Zimbalist III, CEO of Show Management, which produces the boat show for MIASF, said the show had 1,500 boats, and that number of boats in the water was up 4 percent this year. There were 137 yachts over 100 feet and five yachts over 200 feet.

One hot topic was the recent approval of a $17 million dredging project that will ensure the depth of the Intracoastal Waterway from 17th Street to Sunrise Boulevard is at least 15 feet deep instead of 13 to 14 feet. The project will allow bigger yachts to get to places such as the Las Olas Marina. Seiler says the city expected to issue an RFP by Dec. 2 to expand and renovate the marina.

A group of panelists talked about further marine development throughout the region. Mehmet Bayraktar, chairman and CEO of Flagstone Property Group who has built a 1,000-berth marina in Turkey, is developing the only North American marina designed for super-yachts on Watson Island, just north of PortMiami. Bayraktar was inspired by Monaco and St. Tropez for the design of Island Gardens, where two hotels, restaurants and retail are planned on 10 acres. “Yacht owners don’t just eat and sleep on their boats,” he said. “They like to see other things they can do and play.”

Raymond Graziotto, president and COO of Seven Kings Holdings/Loggerhead Marina, has a $140 million residential development at the Loggerhead Marina on Donald Ross Road. An article in the Palm Beach Post said dozens of people have already committed to its luxury condo units, which are priced from $900,000 to $2.8 million. Graziotto is creating a sense of community at the marina by organizing barbecues and trips to the Bahamas. He said that marinas don’t only need adequate power and dock space, but they need amenities such as captain’s lounges, pools and Wi-Fi. “Wi-Fi is more important than water for boaters,” he said.

Robert Christoph Jr., president of operations of RCI Group, said another trend is the opening up of marinas to create waterfront promenades. RCI, which has developed, acquired and managed marine properties, will be working on the redevelopment of Bahia Mar, the epicenter of the boat show. The redevelopment will include an 18-foot-wide, half-mile-long promenade, restaurants in a village atmosphere, condo towers and a parking garage that can be used for boat show exhibits.

The boat show was just starting to pick up after the press conference, with workers still unrolling long strips of blue carpeting on some of the docks.

While the yachts get a lot of the headlines, the show also features hundreds of niche products. Look one way and there are ship bells, look another and there are anchors. There were dozens of inflatables boats, including one that weighed just over 70 pounds, collections of pontoon boats and a floating lineup of wood-accented cruisers.

The most unusual craft I saw was U-Boat Worx’s Super Yacht Sub 3, whose front looked like the bubble found in small helicopters. The company says increasing numbers of super-yacht owners want to take personal submersibles aboard, but in the past, they were too big and difficult to get in and out of the water. The Super Yacht Sub 3 is compact and can fit in the garage area often found on super-yachts. The sub can go up to 300 meters deep (nearly 1,000 feet) and its lithium batteries are good for six to seven dives.

Of course, being able to afford super-yachts and all their toys can be helped by having top-notch investing and tax-saving strategies, which was the subject of a hedge fund symposium that was produced in association with Lombard International and IDF Exchange, which has an office in Miami.

O�Neil Securities” Kenny Polcari, who frequently appears on CNBC, moderated several panel discussions about private placement life insurance and variable annuities, but first gave a keynote about the roots of market volatility that have unnerved many investors. In the old days, there was clear market visibility with 5,500 traders screaming on the floor of the New York Stock Exchange, he said. Then a series of events happened:

First, there was a push to modernize markets with more automation during the Clinton administration.

Then, the U.S. adopted decimal prices, which was pushed by mutual fund companies and other huge asset managers who thought it would bring efficiency.

And finally, the attacks on 9/11 showed there was no backup plan for an event that destroyed the fiber optics at the World Trade Center that linked the markets. That created a push to decentralize the markets and led to a fractured market system with alternative trading systems and so-called dark pools, which have been criticized for the 2010 Flash Crash and the more recent volatility that took place on Aug. 24.

Polcari, who has worked out of the NYSE building for 32 years, said it was BS that retail investors are better served by the current system; mutual fund holders and hedge fund users are ultimately subject to the volatility.

The panelists discussed putting investments inside a customized life insurance product that allows preservation of capital between generations.

Todd Angkatavanich of Withers Bergman law firm said one key to the strategy in passing muster with the IRS is that the assets in the investment are actually owned by the insurance company rather than the policyholder. However, policyholders can decide who they want to manage their investments and sometimes opt to have multiple managers. Panelists indicated that it generally takes about $40 million to make pursuing the strategy efficient.

Lombard’s Sandy Geyelin said the big trend recently has been the growing number of investments that can be put inside structures. “That’s probably the biggest issue – not having a good investment engine in the structure,” he said. Lombard is gaining more strength in that field since being acquired by funds owned by Blackstone (NYSE: BX), which has $333.9 billion in assets under management.

There was some discussion about whether tax code changes could affect the investment strategy, but outside of a few quips about Bernie Sanders, panelists didn’t seem too worried. ?