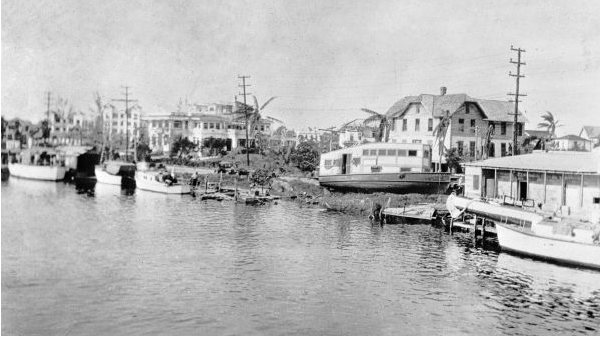 What if a super hurricane hits South Florida

One hint came in June when a flooding threat in western Broward and Miami-Dade counties prompted federal officials to allow emergency pumping of water into the Everglades, even if it meant the drowning of protected animals species. Other hints come from a historic 1926 hurricane that hit the region and modern-era flood surge maps.

Most of us probably understand the impact of hurricane surges, especially if we saw photos of Harvey’s damage near Corpus Christi or the aftermath of Hurricane Andrew in southern Miami-Dade County in 1992. Andrew had a 16.9-foot tidal surge along some parts of the coast and winds of 165 mph. The storm hit at the southern part of the region and was fast moving, so the rainfall wasn’t a major issue like Houston had experienced.

A better example of the impact of flooding would be the 1926 Miami hurricane, which hit the entire South Florida region. Historical photos, included with the slide show accompanying this article, show widespread flooding in addition to flattened buildings. The photos are from FloridaMemory.com, a state archives.

The worst part of the hurricane brought a 10-foot storm surge onto Miami Beach and along several blocks in the city of Miami, according to the National Weather Service.

The Red Cross reported that 372 persons had died in the storm and more than 6,000 persons were injured, the Weather Service says. Damages in 1926 dollars were estimated at $105 million, which would be more than $164 billion in today’s dollars.

Modern models of flood surges show how the risk varies in different parts of the region. Areas along the tidal portions of the Miami River and New River face risks well inland as water is pushed up the river by hurricanes. I happened to be near Poughkeepsie, New York, during Superstorm Sandy and saw how the Hudson River flooded 100 miles north of New York Harbor. Three slides in the slideshow illustrate the potential flooding from a category four hurricane surge in South Florida.

The second risk in South Florida is handling deluges of rain in the western parts of the county, which the surge models don’t show. In the eastern parts of our counties, gravity and tidal rivers drain the water to the coast, especially when the tide is low. The west is a different matter.

Take the Middle River, where I happen to live. It’s a tidal river near I-95 and Oakland Park Boulevard in Wilton Manors. Head a mile west, though, and a gate marks the delineation of where the brackish river turns into fresh water.

The Middle River, like many other rivers, has a series of gates heading towards the Everglades that let the South Florida Water Management District control water levels like a series of stair steps. If a lot of rain is coming, the district can draw down the water by opening the gates and allowing gravity to drain the water east into the tidal portion of the river. Draining in the other direction involves massive pumps on the Everglades levee.

The dilemma faced by water managers in Houston is that water retention areas were in danger of overtopping, which means the water would flow over the banks. The solution was to send more water down the bayou that flows by downtown Houston. There was no good choice.

The obvious concern is what would happen if a deluge of rain hit the western parts of our counties and the water can’t be moved quickly enough to the ocean or over the levee into the Everglades. Canals could overflow.

When we had all the rain in June, which was called a 100-year event, there was concern about the levees that separate urban South Florida from the Everglades. There was no immediate threat of urban flooding, but an Army Corps spokesman told the Sun Sentinel, “At some point the water level, if not dealt with, gets to the point where it could overtop levees.”

Water in the marshes west of the levee were about two feet higher than normal. Water officials were worried about the potential strain on the levees and authorized pumping more water into drier parts of the Everglades.

They also sent more water down rivers like the one I live. While the river has flowed over its banks twice since I moved to my home in 1992, that didn’t happen this time. I’m grateful, but worry about what might happen in more of a worst-case scenario like Houston experienced.

Our elected officials, who have dithered for decades on Everglades restoration and fixing the levee around Lake Okeechobee, need to ensure the Army Corps of Engineers and the Water District have the funding needed to decrease the odds of a catastrophe in South Florida.

We don’t want what happened in New Orleans or Houston to happen here.